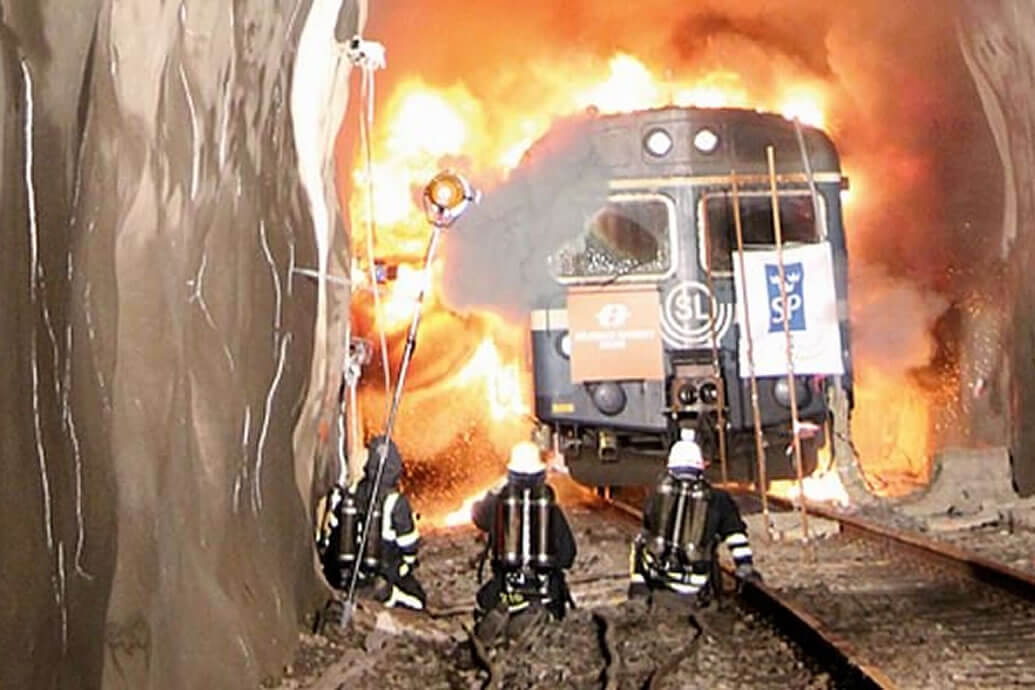 Full scale fire tests are the best way to obtain valuable information about the realistic carriage fires, however, the huge cost and the resulting limited number of the tests make a parametric study impossible.

Instead, model scale tests can be used to study parametric dependencies in greater detail. An analysis of the correlations between four series of metro carriage fire tests in different scales was carried out. The critical fire spread corresponding to a full scale heat release rate of around 2 MW was the key for fire propagation to a fully developed fire. When the critical heat release rate was reached the fire spread steadily until the whole carriage became involved. The maximum heat release rate depends on both ventilation openings and the types and configurations of the fuels inside the carriage. A simple model was proposed which correlated all the tests data very well. The images below show four series of metro carriage fire tests.

The mechanisms of further fire development (beyond the ignition source) are very similar in all the tests. After the critical fire spread, a local flashover occurred and the whole section became involved in the combustion. A local flashover is defined as a critical hot gas temperature of 600 ºC beneath the ceiling or on the floor. Thereafter, the fire spread continously along the carriage until finally the whole carriage became involved. At this stage, the radiation from the ceiling flame and the smoke layer to the lower targets is considered to be the main mode of the fire spread in a carriage. The fire travelled along the carriage at an approximately constant speed, see Figure 2 where the full scale test data were plotted. The average fire spread rate along the carriage (slope in Figure 2) was around 1.5 m/min and 1.8 m/min in full scale tests 2 and 3 respectively. As a comparison, the corresponding full-scale fire spread rate was 1.8 m/min (scaled up) in the 1:3 model scale test with 6 doors open, which correlates well with the full scale tests data. The figures below show the local flashover time vs. distance from the initial fire source in the full scale tests.

The equation is able to correlate all the tests data in different scales very well. Generally for a fully developed carriage fire, the openings available roughly determine the level of the maximum heat release rate. The maximum heat release rate in these tests can be estimated based on consumption of the oxygen flowing in through the openings multiplied by a correction factor, which depends on the types and configurations of the fuels inside the carriage. The correction factor is proportional to the heat of combustion and the fraction of the fuel surfaces exposed to the fire, and inversely proportional to the heat of pyrolysis. The correction factor was found to be around 1.26 in full scale tests, 1.3 to 1.7 in 1:10 model scale tests and 0.67 to 0.8 in 1:3 model scale tests, which correlate very well with the proposed equation.

The influence of the tunnel and longitudinal flows on the fire development in a carriage is estimated to be limited. In other words, the heat release rate curve obtained from a carriage fire in the open and in the tunnel should be similar. The fire grows more rapidly for a carriage with more openings, and the travelling time of the fire inside the carriage is shorter. This also indicates the importance of the initial openings and the breakage of the openings during a carriage fire. Normal luggage mainly consisting of plastics is highly combustible, and plays a much more important role in the process of the initial fire spread stage, compared to the fully developed stage. The ignition location has a insignificant influence on the fire, but indeed a fire with ignition sources located in the middle of a carriage could reach its maximum heat release rate slightly earlier. However, it can be expected that the critical heat release rate required for the initial fire spread needs to be slightly higher due to more entrainment of the fire plume compared to an initial fire at one end of the carriage.

Further, there is good agreement for the maximum extinction coefficient between different scales. This indicates that maximum local mass burning rate and mass flow rate scales relatively well. In short, the local fire behavior scales well. In contrast, the heat fluxes from the large flames out of the first door were overestimated in model scales since the results show that the scaling of this heat flux in 1:3 model scale represents zeroth order of the length scale, rather than square root. For smaller flames from the windows with less sooty smoke, better results could be obtained.