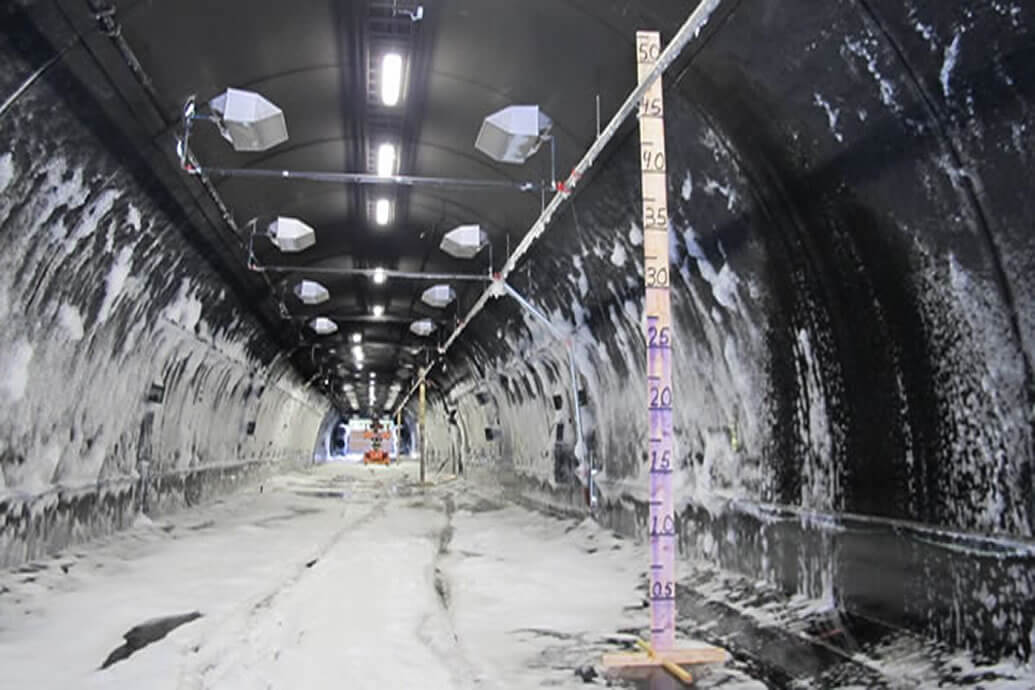 Since 2007, SP Fire Research has been involved in the development of a foam firefighting system to protect rail tunnels carrying freight trains in Antwerp’s harbour district.  SP’s role in the project, with a total budget of over EUR 870 million, has been to evaluate the performance of the firefighting system, to provide data for determining the necessary system design capacities, and to act as an independent third party for tests of the systems in Antwerp.  The tunnel system was opened for traffic in December 2014.

In February 2007, SP was invited by Svenska Skum AB (nowadays part of Tyco Fire Protection Products) to witness a demonstration test of a high expansion foam system in a test tunnel at the If Sikkerhetssenter in Norway.  The demonstration was a result of initial discussions between Tyco and TUC RAIL, the Belgian company that had been instructed to specify the requirements for the extensive project for improved rail transport to Antwerp’s’ harbour area.

Almost eight years later, in 2014, the Liefkenshoek Rail Link (“Liefkenshoekspoorverbinding”) is ready. 16,2 km long and up to 40 m below ground level, it runs under two canals and the River Schelde.  About 13 km of the link is in tunnel, consisting of a twin-track tunnel, the Beveren Tunnel, and a double tube tunnel, the Boor Tunnel. The foam firefighting system that SP has assisted to develop consists of 5500 foam generators installed in 60 m long sections that are activated three at the time (i.e. 180 m) in the event of a fire (see Figure 1).

The owner of the rail link is Infrabel, Belgium’s state-owned equivalent of Sweden’s National Transport Administration.  Infrabel has in turn employed the TUC RAIL consultancy as the requirements specifier and project supervisor.

The project was awarded to Locorail, a consortium consisting of the companies BAM, Vinci and CFE.  The physical design and build construction was carried out by Locobouw, in turn a consortium of several companies.

The firefighting system has been designed and built by Locofire, a consortium of BAM Techniek bv and Aquasecurity NV.  It is based on a system developed by Svenska Skum AB in the 1980s under the name of HotFoam®.  Svenska Skum AB is nowadays part of Tyco Fire Protection Products, which was also involved in the project.

High expansion foam is also used by fire and rescue services as a manual system to fill rooms or buildings with foam. In conventional high expansion foam systems the foam generator is placed such that it draws air from outside the building, i.e. the air and fire gases in the protected room must be ventilated away at the same rate as the foam is applied.  If not, a positive pressure will build up, and no foam can be generated.  In an ‘inside air’ system, the foam generators are installed in the building, using the inside air (fire gases) to generate their foam.  The generators are of a simpler and more robust design, without fans as normally used in conventional high expansion foam systems.  In addition, there is no need to ventilate the space while the foam is being delivered.

The drawback of such a system is that foam production falls off with higher temperatures of the fire gases, and can also be affected by the composition of the gases.  ‘Inside air’ systems therefore require special foam concentrates that are more resistant to fire gases.  The HotFoam® system has specially designed foam generators and a foam concentrate specifically developed for inside air applications.

SP Fire Research was asked by Svenska Skum AB to develop and perform a test programme to represent likely fires in a freight rail tunnel.  A simulated locomotive and wagon were built and loaded with various types of fire loads.  As the rail tunnel in Antwerp will be used for the transport of various cargoes, including chemicals and a range of fuels, potential fire sources of pool fires, spray fires and pallets were chosen.  A series of tests was carried out in December 2007 in a section of tunnel that was built in SP’s large fire test hall.  The tunnel section was about the same as that of the Antwerp tunnels, i.e. with a cross-sectional area of about 40 m2, see Figure 2.

In addition to deciding suitable fire scenarios, a key part of the work was also to provide basis for determining the necessary design capacity of the HotFoam® system.

For a water-based fire-fighting system, (e.g. sprinklers, foam), the quantity of extinguishing media applied per unit of time and per unit of area is a critical parameter, i.e. application rate.  As high expansion foam fills a space, the unit of volume could be used instead of units of area, but in fact the application rate, expressed as l/min m2, is also used for high expansion foam.  The parameter filling rate, i.e. the rate at which the level of foam rises in the space (m/min), is often also used for traditional high expansion foam systems.  This can be relevant if we know by how much the foam expands for a given system, i.e. the expansion ratio.

In the case of an inside air system, foam production varies considerably, depending on the temperature and composition of the fire gases.  If we are to talk about the filling rate, it is then preferable to use the term ‘nominal filling rate’, which is calculated from the application rate and the expansion ratio at a particular water pressure.  For example, it was found in our fire tests in the tunnel section that, after foam had been produced for a while at some particular application rate, the filling rate fell to zero. In other words, the application rate was insufficient to extinguish the fire.  After a number of tests, we arrived at the minimum necessary application rate. See Figure 3.

Tests in the 100 m long If tunnel in Norway

A series of fire tests was performed in the 100 m long test tunnel at If Sikkerhetssenter in Norway in March 2008.  Fire scenarios and fire-fighting system capacities were chosen on the basis of the results of the tests in SP’s large fire test hall.  A total of 30 foam generators, distributed over three sections, were used in order to achieve the nominal application rate.  The fire scenarios were those that had been used previously, although in certain cases a considerably higher fire load was created than could be employed in the test hall.  The potential heat release rates from the various tests ranged from 9 MW to 100 MW.

The If tunnel has a cross-sectional area of about 40 m2, which corresponds to the cross-sectional area of one of the Antwerp tunnels (the Boor tunnel).  However, the If tunnel is considerably shorter, which means that one entire 180 m long section (3×60 m) could not be used.  Simulation of the considerably longer Antwerp tunnel was achieved by partly blocking the tunnel’s openings.  The assumption was that the foam produced in a 180 m section in a longer tunnel would to some extent hold back foam produced by foam generators further in towards the centre of the section. See Figures 4-5.

The work of the rail link project continued, with one of the elements being evaluation of other suppliers of foam extinguishing systems.

SP was contacted by Locofire at the end of 2011 to discuss additional tests in order to measure the actual filling rate of the foam.  It was decided to perform additional foam filling tests in the If tunnel, without a fire, with the HotFoam® system installed, and as far as reasonably possible with the same conditions as during the 2008 fire tests.  With the assumptions, and under the test conditions, a filling rate of 1,9 m/min was measured, and this was set as a requirement for the real system in Antwerp. See main image and 6.

On behalf of Locofire, SP attended and witnessed tests performed in the two tunnels in Antwerp.  SP’s role was to attend and, as an independent third party, to monitor the tests and to prepare a report on the test conditions and results.  The system installed in the tunnels was based on the foam generators used in the HotFoam® system, somewhat modified in respect of the way in which the generators were mounted.  Tests were performed in December 2012 and January 2013.  The test results showed that the filling rate in some of the tests was lower than had been expected, and that foam production varied from one test to another. See Figures 7-8.  Facing chemistry changes of such a long development project, a new foam concentrate had to be reformulated that could meet or exceed design criteria’s from the beginning of the test in 2007.

During 2014, SP performed foam filling tests and fire tests in the If tunnel, using the new generation foam concentrate HotFoam 2%, in the same way as for the 2008 and 2012 tests.  The measured filling rate in these tests was 2,1 m/min, which became the criterion for the Antwerp tunnels.  The fire tests using the new foam concentrate showed similar performance to that of the 2008 fire tests.  The performance requirements were regarded as fulfilled with the use of the new concentrate. Only final tests in one of the Antwerp tunnels now remained.

In addition to the tests for the tunnel application, it was also specified that the foam concentrate should fulfil the requirements for which the system using the old concentrate was already certified, such as for engine rooms in ships in accordance with IMO requirements.  These tests were performed by SP in 2013.

Foam filling tests were performed in one of the Antwerp tunnels in April 2014 under SP’s supervision.  The filling rate was measured as 2,9 m/min, thus clearly exceeding the criterion of 2,1 m/min.

The tunnel was officially opened on 9th December 2014, and the first trains passed through it on 16th December.

This article was written by Magnus Bobert and published by Brandposten.

Main Image: The If tunnel with the HotFoam® system installed. In the foreground can be seen one of the three depth gauges used to measure the foam depth, monitored by video cameras.  Some foam is still left on the walls and floor of the tunnel after a test.  Photo:  Magnus Bobert