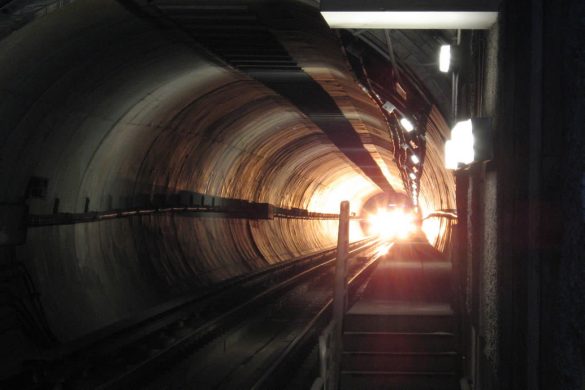 Railway tunnel fires are rare, but when they do occur the consequences can be catastrophic, particularly if they involve passenger trains which cannot be driven out of the tunnel. The passengers aboard the train must then not only realise that they are in a dangerous situation which requires them to act quickly, but also make the active decision to evacuate the train so as to reach a safe location, either inside or outside the tunnel. Moreover, a basic principle is that they should be able to do so on their own, without help from fire and rescue services.

A safe railway tunnel is therefore one which allows people to reach safety in case of fire, even when trains have to be evacuated inside the tunnel. In order to construct a safe railway tunnel, knowledge is required of both human behaviour during tunnel fires and the difficulties people may encounter during evacuation. This knowledge was very limited until the recent presentation of new research in the field, which shows, among other things, that much of what we know of people’s behaviour in relation to fires in normal buildings is applicable to fire scenarios in tunnels.

One important conclusion is that people aboard a train rarely panic during tunnel fires; on the contrary, it often takes some time for people to react and make the decision to evacuate. Factors influencing the decision include access to information, the passenger’s role aboard the train, the expectations associated with this role, and the actions of other passengers. Taken as a whole, the results can be used to show the critical role information plays to passengers on trains in the event of a fire in a tunnel.

The research also reveals several unique aspects and problems which people face during an evacuation of a train in a tunnel, and suggests several solutions to these problems. One example is to minimise the height difference between the train and the tunnel floor. When there is no platform to exit onto, people must find a way to reach ground level, a distance that may exceed a metre. In general, this distance may make it problematic for people to exit, but these difficulties are even more pronounced for those with a disability.One measure which would facilitate an evacuation would be to build elevated footpaths in railway tunnels.

Such a solution would also be beneficial in that evacuation could then proceed on a level surface rather than on macadam, which may be problematic to walk on. Another identified problem relates to the inclination of people evacuating a railway tunnel to move towards the tunnel’s openings. This is due to the fact that, in the event of fire, people tend to move towards known spaces and, in a tunnel, many people associate this with the tunnel’s portals. The problem with this behaviour is that it may unnecessarily prolong the time it takes for people to reach safety, as they avoid using existing emergency exits along the way.

Several solutions are proposed to this problem. Fitting the tunnel’s emergency exits with loudspeakers which can send out an alarm signal followed by a spoken message, leading them towards the exit, may be a very effective way of making people aware of the existence of emergency exits. As compared to other forms of directions, for example light systems, loudspeaker systems have been proven to be a far more effective means of ensuring that people use emergency exits, even when smoke obscures one’s vision. Such systems are both uncomplicated and inexpensive, which also allows them to be used to increase safety in existing tunnels.
The research is an important contribution to understanding human behaviour during tunnel fires, and the results can be used to ensure that new safety measures are well adapted to expected human behaviour patterns.

Footnote: This article is a summary of Karl’s PhD thesis. Karl succesfully defended his thesis at a public seminar at the Faculty of Engineering (LTH), Lund University, on June 12th.

This article was written by Karl Fridolf and published by Brandposten.