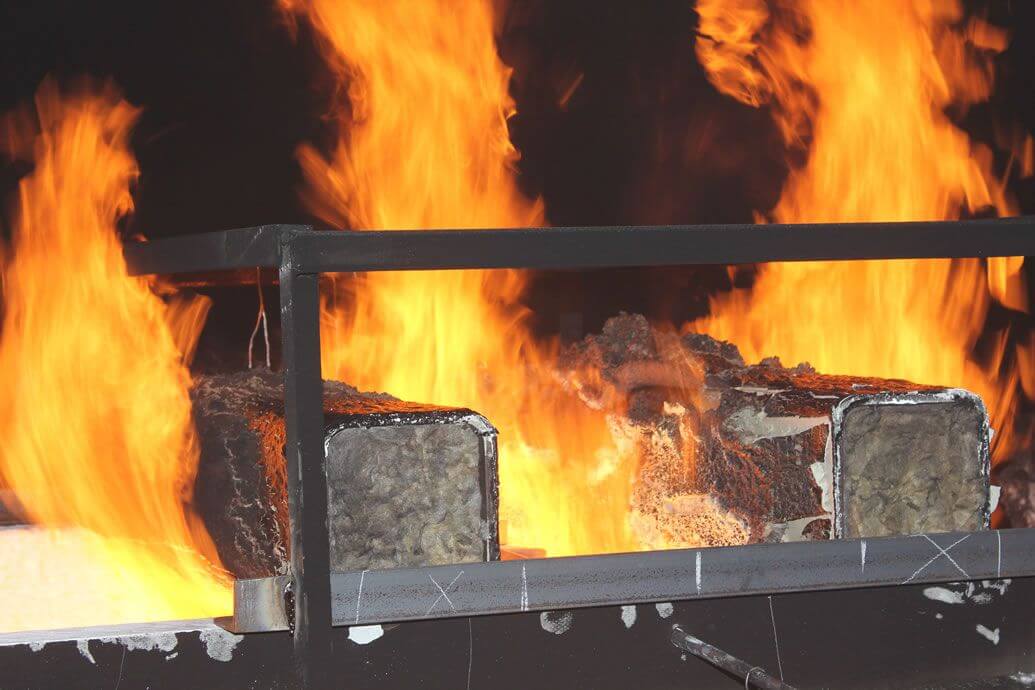 In a recently concluded Swedish Fire Research Board project, the behaviour of four intumescent systems for steel constructions that are available on the Nordic market was experimentally investigated. The primary purpose of the study was to explore the behaviour and performance of the protective paint during different, frequently occurring fire scenarios, including standardised tests. The results of the test series show that two of the tested systems do not provide the fire protection they were designed for.

The standard test used for this type of protection system is EN 13381-8, from which all of the design tables for selecting a proper system thickness are developed. In this methodology, the test specimens are exposed to the standard time/temperature fire curve in a furnace. Due to previous experience of fire testing intumescent systems, it was known that both heat exposure and the flows around the expanded product can influence the performance of this type of product. As intumescent paints are often used on cross-sections in open-plan houses, both ceiling jets and fire plumes were considered to be realistic scenarios, and so were included in the experimental study, which also included cone calorimeter tests and standardised furnace tests. One of the fire plume tests can be seen in Figure 1. Figure 1: Testing of intumescent paints in a fire plume scenario. Parts of the protection on the specimen on the right fell off during the test.

The four different intumescent paint systems used in the experimental study, A-D, were applied to hollow, square cross-sections of steel beams according to the instructions given by the respective suppliers. The thickness of the active component (the intumescent paint) was chosen from the suppliers’ respective
design tables so as to maintain fire resistance for 60 minutes at a design temperature of 550°C. According to the suppliers, all systems were tested accordance with the
current European standard for intumescent paint. Despite this, it was discovered during the study that System A included a non-certified primer at delivery, as the primer provided by the supplier was clearly not the one that had been used during the standardised testing that the certification was based on. But according to the supplier this primer was equivalent.

The results of the testing in the fire resistance furnace showed that Systems A and B did not function as designed, as they failed to limit the rise in temperature for 60 minutes, despite the fact that these two systems were the ones that expanded to the greatest extent during the 50 kW/m2 exposure in the cone calorimeter. During the ceiling jet and fire plume scenarios, System A lost its adhesion to the steel surface, leading to a rapid rise in the temperature of the steel. Whether this was a result of the use of a non-certified primer or the very high expansion that was measured for System A during the cone calorimeter tests (or a combination of the two) is not possible to determine. In summary, two out of the four tested systems performed very poorly. As the performed test series covered only one cross section with protection designed for one hour of fire resistance, the study does not claim to provide a full picture of the behaviour of intumescent paints. However, as the thicknesses of all four systems
were selected on the basis of being far from the most ideal ones allowed by the design tables, which theoretically are the most likely to result in adhesion problems, this study shows that the question of the adhesion of intumescent paint systems deserves further attention.

The study, which is presented in SP Report 2016:43, did not clearly demonstrate that the chosen ad hoc scenarios, which used ceiling jets or fire plumes, were more decisive than the standard furnace exposure test. In these tests, however, it is possible to characterise and regulate the flow around the test specimens, which is near-impossible for standardised furnace tests. This potentially makes these types of test a better tool for evaluating the adhesive capacity of intumescent paints at elevated temperatures, as this is often what governs how efficient systems are.

Main image : Testing of intumescent paints in a fire plume scenario. Parts of the protection on the specimen on the right fell off during the test.