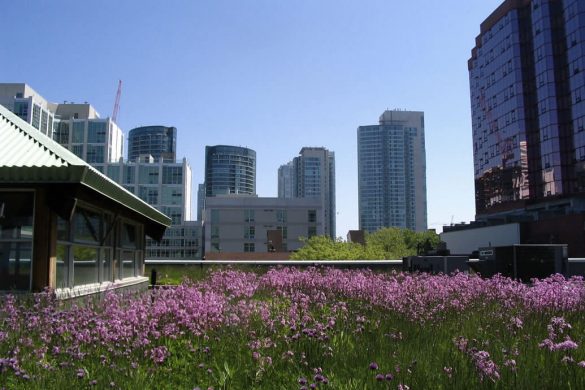 Fire Safety for Green Roofs: Are green roofs comparable to traditional roof coverings such as bitumen-based-paper ones, or are they roofings that can support a potential ‘forest fire’? At present, green roofs are fire tested in the same way as traditional roof coverings, with ‘burning brands and wind test’, and are required to pass the Broof (t2) classification in accordance with EN 13501-5.

When products are tested according to a specific standard, the conditions under which the testing is to proceed are described in as much detail as possible so as to facilitate proper comparison of the results. Specimens are thus generally conditioned with a constant temperature and humidity prior to testing in order to avoid variations in test results resulting from differing moisture contents. This generally entails specimens being kept at 23°C and 50% relative humidity, which is relatively easy to achieve with most products but may take more or less time dependent on the type of material and its properties relating to the emitting and absorption of moisture.

Upon delivery, a green roof may contain a great deal of moisture, consisting as it does of a layer of soil, gras, succulent plants, etc. Ensuring a constant temperature and level of humidity throughout a specimen according to the above procedure, however, is essentially impossible due to the time that this would take. In order to ensure that testing takes place under the same conditions at all labs, the european group of fire laboratories (EGOLF) has stated that green roofs are to be dried at 105°C until a constant weight is achieved; then conditioned in accordance with the relevant testing standard. This is a so-called ‘worst-case’ reasoning, and is often used to define a testing scenario. If the testing material is a green roof that consists largely of tall gras, it is easy for it to fail to meet the criteria for Broof (t2) fire classification, as stated in the EN 13501-5 standard. This raises the question of whether the testing method is unsuitable, or if the result simply indicates a real risk of fire for this type of product. The view of RISE Safety – Fire Research is that the procedure recommended by EGOLF is reasonable, and ensures the reproducibility of test results between labs. However, a fire classification of a green roof according to EN 13501-5 alone should not form the basis for a fire risk assessment, as a green roof surface can change considerably over time, eventually becoming very different from its state when tested.

A red light for green roofs?

Environmentally friendly roof-covering options have become increasingly topical in the construction industry over the course of the last decade, and the demand for sedum-herb roofs has increased. This reflects the increasing focus on sustainability that has become a large part of almost all sectors of society. Despite this increasing interest, relatively few guidelines exist that relate to how combustible roofs are to be designed so as to not compromise on fire safety. Sedum-herb roofs do not currently fulfil the requirements on fire classification (Broof (t2)) that are posed by Boverket’s Building Regulations (BBR), meaning that it is difficult to install this kind of roof covering. As this problem is still relatively new and there is currently no established practise, fire protection consultants often encounter difficulties regarding this kind of roof covering.

Whether green roofs are here to stay or not is difficult to say. However, a simple web search shows that the proponents of this blend of new and old construction techniques are many, and that extensive research into the positive effects of green roofs has been conducted – although there is as yet a lack of understanding of their fire resistance properties. Countries such as Germany, Canada, and Switzerland have gone one step further, passing laws that require a certain percentage of all newly built roofs to be green ones (Office of the Chief Building Official, 2013).

Historically, roof coverings of an organic nature have caused the spread of fires, leading to very extensive urban conflagrations. It has been said that the great extent of the Great Fire of London in 1666, which burned down five sixths of the buildings that lay within the city walls, can be attributed to the thatched roofs of the buildings, which were typical of the day (Koo, Pagni, Weise, & Woycheese, 2010).

The advantages of and incentives for using green roofs

Green roofs have many advantages, and anyone interested can devote many hours to reading scientific articles that explain the positive impact of green roofs on the climate and environment. Below, a small selection of these positive effects, which taken together can be considered to sum up the rationale behind and incentivisation of using green roofs, are presented:

These advantages are directly connected to the structure of a green roof, which is explained in brief below. Describing the structure of green roofs also assists in highlighting the problem of the fire protection of sedum-herb roofs, as the various layers that the roof consists of can generally become involved in a fire to differing degrees.

A sedum-herb roof is generally constructed using a number of layers of varying functions and specific material properties. A great number of products are currently available on the market, but in general the construction of the roof can be summarised, from the joists upwards, as follows:

A waterproof membrane is placed on top of the joists; this is followed by a root barrier that protects the waterproof membrane from mechanical damage. Then follow, in order, a drainage layer, a water-storing layer, soil substrate, and vegetation consisting of sedum, grass, and herbs of varying species.

Although a great deal of research has been conducted regarding the positive effects on the climate of green roofs, the topic in relation to fire has been sparsely explored. There is at present no standard or best practice regarding the design and construction of green roofs in Sweden. The current version of BBR contains no regulations regarding how green roofs may be used, leaving only the general roof covering requirement of the BRoof (t2) classification. Green roofs are more common in countries such as Germany, Japan, and Great Britain, which is why the guidelines used in these countries are generally better adapted to current sustainability development. Examining these existing guidelines is likely to be of interest when it comes to designing Swedish standards for green roofs.

The current fire-testing method for roof coverings in Sweden

At present, the testing method used for the fire classification of roof coverings makes no distinction between organic and inorganic materials. The ability of the testing method to result in a fair classification of organic roof coverings can – and should – be questioned. This is exemplified by the fact that prior to testing, a specimen is dried in an oven at a temperature of 105˚C until a constant weight is achieved (SP Technical Research Institute of Sweden, 2016), but in reality this would result in the plants on the surface of the roof covering withering and dying; this procedure does not, then, give a wholly accurate picture of the moisture conditions in sedum-herb roofs in the Swedish climate. A further shortcoming is that, according to current testing criteria, fire propagation along the length of the specimen must not exceed 0.55 m (SP Technical Research Institute of Sweden, 2016). In theory, then, vegetation cannot be allowed to exceed this height if the fire propagation criterion is to be met: The reason for this is that if a 0.6 m-high piece of vegetation were to catch fire and fall on the roof, the roof would be deemed to fail the test.

The suitability of the testing method in terms of green roofs should, with the above problem in mind, be examined in order to provide a clearer picture of, for example, the behaviour of tall sedum plants during a fire.

It can be concluded that Swedish rules and regulations are currently not able to factor in the dangers associated with green roofs. It has been found that the differences in assessments of green roof coverings differ from case to case, and no generally accepted guidance or best practice for the design of such structures can be shown to exist. This is, however, something that we believe is possible to change. There is much to learn from countries such as Germany, where modern construction techniques for green roofs have developed over the course of many years. Further research regarding safe intervals between buildings with sedum-herb roofs (or roofs with even lusher vegetation) should be performed in order to eventually create fire safety solutions using ‘smart’ engineering.

Roofs covered with sedum herbs and similar must fulfil the BRoof (t2) fire classification to avoid violating the BBR. As has been discussed above, a sedum-herb roof does not pass this test; this is likely due to shortcomings in the testing method for organic and non-smooth roof coverings, rather than any insufficiency in terms of the fire-resistance properties of the roof covering itself.

Tests should be conducted in order to ascertain whether this type of roof covering entails a greater likelihood of fire in itself and, if this is the case, possible protective measures should be investigated.

Sustainable building and climate-smart solutions appear to be part of the future of societal development. Should knowledge of current materials, testing methods, and standards not follow this development, then? Is it not time we looked into how the buildings of the future will impact the way we see safety and building today, rather than taking the opposite perspective?