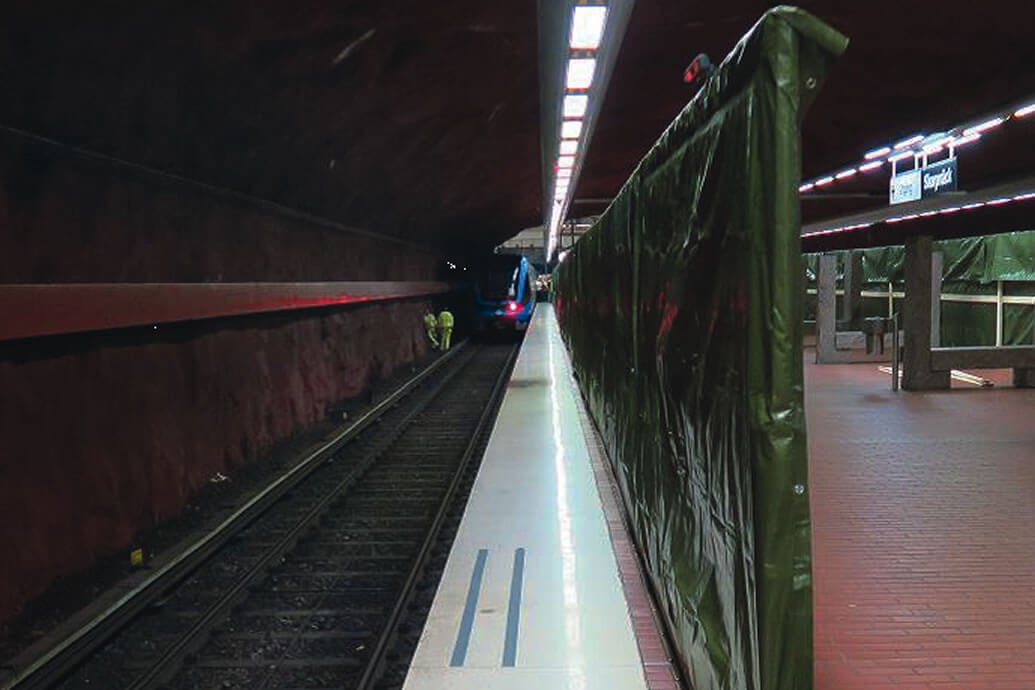 In autumn 2016, an experiment was carried out at the Skarpnäck subway station in Stockholm with the aim of studying people’s behaviour and movements during evacuation along elevated platforms in the event of a fire. The project was a collaboration between RISE and Brandskyddslaget, and was commissioned by the Swedish Transport Administration. The purpose of the experiment was to study human behaviour when evacuating along an elevated platform for different scenarios and the overall project objective was to develop guidelines for fire safety design concerning evacuation along elevated platforms.

As the Skarpnäck subway station does not feature an elevated platform, a 93.6 m long screen wall was built along the edge of the platform adjacent to the northern track. By moving the screen wall sideways, altering the distance between the wall and the edge of the platform, it was possible to alter the width of the walkway for different tests. The widths that were tested were 1.2, 1.05, and 0.9 m. Along the first half of the elevated platform, a train was parked next to the walkway. At Skarpnäck subway station the platform is in level with the train floor, making the height difference between the walkway and the track 1.4 m.

The tests were performed with a mixed population

A total of 111 people participated in the experiment; 54.6% were men, and 45.4% women. The youngest participant was 18 years old, and the oldest 77. Three people were wheelchair users; one man and two women.

The experiment comprised five tests. In Tests 1, 3, and 5, the entire test group moved from one side of the elevated platform to the other. In Tests 2 and 4, the test participants were divided into two groups (A and B); Group A moved along the elevated platform as before, while Group B began inside the train and joined the flow on the platform when Group A passed the train doors. In addition to the five tests, reference tests were conducted in a 30 m long corridor built with two screen walls on the southern end of the platform. Both individual and group tests were performed and the widths that were tested were 1.2, 1.05 and 0.9 m. After the experiment, the participants were asked to complete a survey, which 99% of them did.

The flow rate was measured at four positions:

The results show that the flow rate decreased with the width of the walkway. This was true for all analysis points.

After studying the video material from the experiment, it can be seen that the participants did not walk close to the platform edge (no one used the 10 cm closest to the track area). This was true for the full length of the walkway, independent of the width. It was also seen that the participants walked closer to the platform edge when there was a train parked next to the walkway than they did when it was open to the track area.

When there was enough room for participants to be able to walk independently of one another, they generally chose to do so close to the screen wall. Those who knew one another prior to the experiment often chose to walk side by side, while the other participants generally preferred to walk in single file. When it became more crowded, the test participants adopted different formations depending on the width of the footpath. In the tests during which the width of the walkway was 1.2 m, the participants walked in two columns; in those where the walkway had been narrowed to 1.05 m, the participants still walked in two columns but in a staggered fashion, and in the test during which the walkway was 0.9 m wide they walked in single file.

In order to make the evacuation process along elevated walkways more effective, the possibilities for people to overtake others walking slower than themselves, should be further reviewed. Since nearly half of the participants could not, alternatively experienced difficulties, passing others one suggestion for future studies is to investigate how the design of an elevated walkway can be improved to make overtaking easier.

The difference in height between the elevated platform and the track area affected the test participants in several ways; the flow rate along the walkway decreased and the width of the walkway was not used to the same extent where it was open to the track area as compared to the part of the walkway that the train was parked next to. The height difference also affected one of the wheelchair users to the extent that this person stopped in the middle of the walkway in two of the tests, and chose to not participate at all in the remaining ones. The suggestion for further study is thus to investigate how elevated platforms can be designed, and with what aids they could be equipped, in order for the difference in height to have less effect. More information on the results is available in SP Report 2017:11.