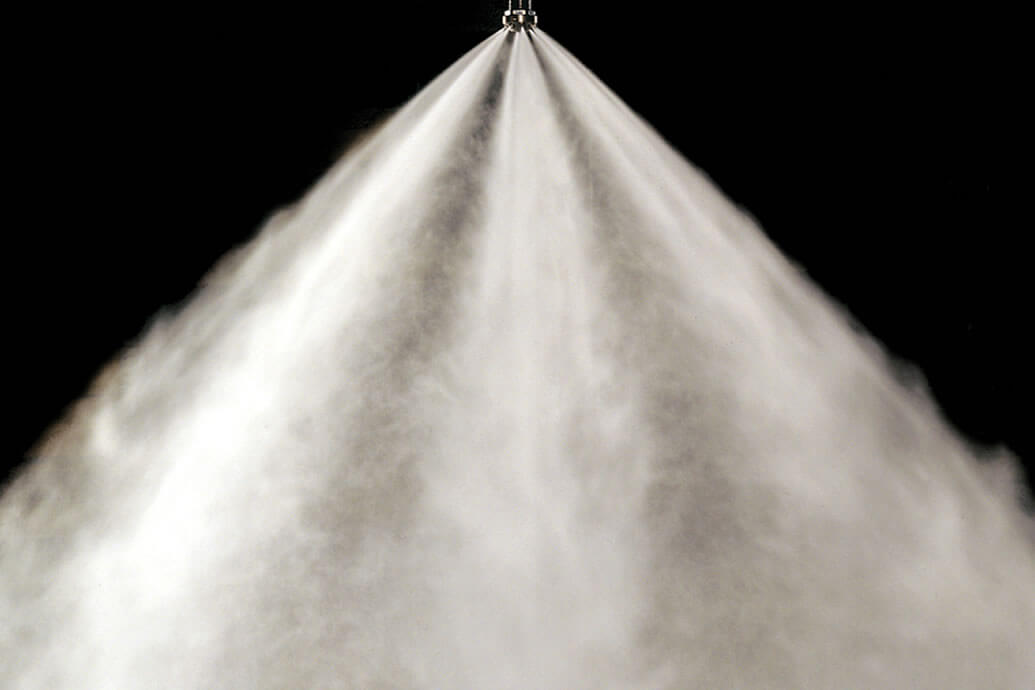 Watermist fire protection systems are fire suppression systems that have emerged as an alternative fire safety solution for specific applications over the past few decades – but are they suitable for commercial low-hazard occupancies?

A watermist system is a fire suppression system that, when activated, will discharge a spray of water droplets from a nozzle (or array of nozzles). The sizes of watermist droplets will ­typically be smaller than those discharged by ­traditional sprinkler systems. A system may operate automatically when nozzles are exposed to a sufficiently high level of heat to activate a frang­ible glass bulb or solder link contained in a nozzle.

Some systems can be linked to a detection ­system and use open nozzles, while other systems can be manually operated. The system will comprise a number of components to provide a water reservoir, water pressurising system and pipework to deliver water to spray out from the system ­nozzle/s. Different watermist systems operate at different system pressures between about 3-bar and 100-bar or more. Watermist systems can ­suppress fires by wetting, cooling and through localised oxygen displacement (by conversion of water droplets into steam in the flame zone).

In the UK and elsewhere, watermist systems are increasingly being considered and used for the fire protection of buildings, including offices, hotels and other commercial premises. Watermist is seen as an exciting new technology by many in the fire industry and systems may also offer additional environmentally attractive design. However, for those responsible for specifying systems, approving building designs and insuring properties, there is a challenging lack of relevant, independent advice and information on their suitability.

Watermist systems for protection against the damaging effects of fires come in a multitude of different shapes and sizes. Historically, different systems have been tested and demonstrated to be effective against a number of specific applications. A few examples include their use in cabins on board ships, in machinery spaces or for specific localised protection of objects. There are further examples of effective watermist systems tested for the protection of small rooms (such as hotel ­bedrooms, prison cells or domestic dwellings).

The mechanisms for successful watermist ­operation in a fire event and the variables that influence the effective performance of systems – where the volume of the compartment is limited – have now become well established through many testing and research programmes.

Watermist systems will typically discharge sig­nificantly less water than traditional sprinkler ­systems. For many applications this is an advantage both in terms of the design requirements of the system and the reduced potential for water damage in the event of a system operation. However, what is critical is that the ability of a system to tackle a fire using less water is not compromised. For large open spaces where there may be significant ­quantities of combustible material, the suitability of watermist protection needs to be carefully assessed.

Due to the diversified nature of watermist systems and their many bespoke designs it has been a great challenge to standards writing authorities and third-party certification bodies across the world to establish suitable standards and certification schemes. This has led to a loosely regulated installation history for watermist systems and often, a lack of confidence in their fire suppression performance.

To address this issue, The Loss Prevention ­Certification Board (LPCB) in the UK will be ­publishing a Loss Prevention Standard (LPS 1283) and certification scheme for the approval and listing of watermist systems for use in commercial low-hazard occupancies. The scheme will support and a­ugment the requirements of DD 8489 ‘Fixed Fire Protection Systems – Industrial and Commercial Watermist Systems’. In addition, LPCB also intends to establish a watermist system installer scheme (LPS 1284).

Manufacturers and suppliers will be able to undertake LPS 1283 to verify the components and design methodology of their watermist system. Installers of the manufacturer’s watermist systems will be able to undertake LPS 1284 to verify their competency for design, installation and main­tenance. End users of watermist systems will be responsible for the on-going maintenance of ­systems and in particular maintenance of the building fire load and fire hazard classification ­consistent with the watermist system design. This will mean it is necessary for the ‘Responsible ­Person’ under the Regulatory Reform (Fire Safety) Order, 2005 in the UK and more broadly anyone responsible for fire safety in buildings, to conduct a fire risk assessment and ensure compliance with the specified criteria of the certified system.

As stated previously, critical to the successful operation of a watermist system are the system design details. Of equal importance are the building design details – the fire loads, obstructions, ventilation, ceiling height, compartmentation and openings in the protected space. These design details need to be fully addressed in both the fire performance tests and installed systems to ensure their effectiveness. Therefore, the LPCB certification scheme will contain restrictions with respect of floor area (for certain systems), ceiling height, ventilation, fire load density, fire growth rate, height of combustibles and obstructions. The development of this Loss Prevention Standard
was underpinned by a programme of research by the BRE Trust as explained below.

The BRE Trust has recently funded a three-year watermist research programme, supported by industry partners. The programme included large scale fire tests conducted by BRE Global at its Burn Hall laboratory near Watford in the UK.

To assess the performance of watermist systems, three key experimental tasks were undertaken:

1        A series of single wood crib fire tests to evaluate the influence on the effectiveness of the ­watermist system fire suppression capability of; water flow/pressure, nozzle position in relation to fire position, obstructions, ventilation and compartmentation.

2        Development of a full scale fire test protocol for commercial low-hazard occupancies based on a ‘stylised’ office fuel loading.

3        Testing of a sprinkler system and industry ­provided low and high pressure watermist ­systems to establish their performance against the ­developed fire test protocol.

Key Findings from the Research

1        From the series of tests with a single wood crib, it was demonstrated that, for the specific conditions tested:

2        In the development of the full scale test protocol an assessment was made of typical open office areas. Information was gathered and reviewed from an office survey, office fire load surveys, office fire test data and standard test fires. A ‘stylised’ office scenario was arranged consisting of two combustible walls, a chipboard table with foam sheets, cardboard and paper loading and with two wood cribs (but also containing plastic material) beneath the table top.

The scenario met the following criteria:

3        In the full scale tests carried out, the results were as follows:

The scope of the testing was necessarily limited and other system arrangements may perform ­differently.

Overall, the full-scale test results were of concern. A significant number of watermist system arrangements were not able to provide expected levels of fire protection for the tested scenario (open plan area with obstructed fire loads and a high ceiling). In terms of the design of the tested systems, in many instances, the spacing between nozzles was too great and the quantity and momentum of water discharged too low to provide effective fire suppression. The test work demonstrated that watermist system effectiveness cannot be assumed and that it is essential to verify system performance against realistic, reliable and repeatable fire test protocols.

A report titled “Watermist fire protection in offices: experimental testing and development of a test protocol”, published by IHS BRE Press (FB 34), provides the detailed results from the research ­carried out. The report describes the experimental study and provides fire test evidence to assist in the understanding of watermist systems.

The test protocol has now been adopted by the British Standards Institute and forms part of a recently published watermist draft for development standard in the UK, DD 8489 ‘Fixed fire ­protection systems – Industrial and commercial watermist systems’.

For many in the fire industry, watermist systems will continue to offer an alternative to more ­traditional systems. The progress being made now has the potential to result in robustly tested and certified watermist systems for low-hazard ­commercial premises. This will help to provide ­confidence to authorities having jurisdiction, ­building owners and insurers that a watermist ­system is suitable for the intended application to which it is being installed.

For further information, go to www.bre.co.uk