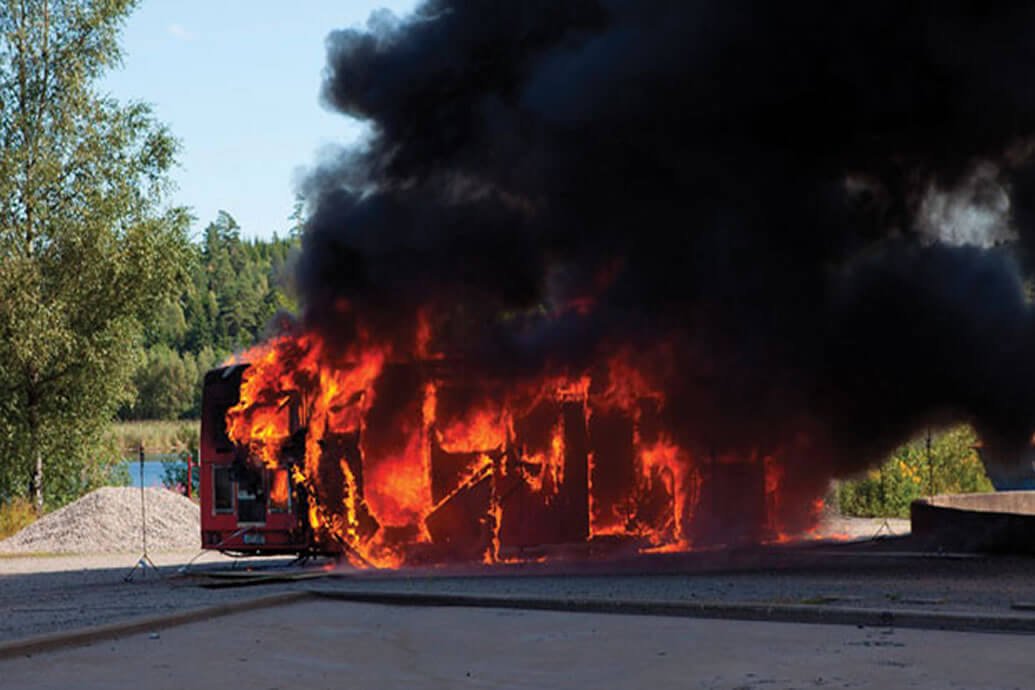 Successful Evacuation from a Burning Bus – A serious bus fire occured after two CNG buses collided at Ättekulla in Helsingborg on 14th February 2012. The fires in the two buses spread very rapidly, to the extent that both vehicles were completely engulfed in flames when the fire service arrived. Fortunately, no-one was injured in the accident, but the fires grew so rapidly that the Swedish Accident Investigation Authority decided that a full investigation was needed. SP Fire Technology was part of the group that performed the investigation.

The fire started when a Volvo bus drove at slow speed into a stationary MAN bus. Although the speed of the collision was low, it was sufficient to cause a gas and oil leak in the engine compartment of the bus that was hit. The subsequent fire investigation showed that the gas leak had been ignited by sparks from a damaged, but still energised, light.

At the time of the accident, there were only a few passengers on one of the buses. They, together with the drivers, escaped in good time, but it was found that the driver of the rear bus had had some difficulties in opening the bus doors. This, together with the strikingly rapid progress of the fire, gave reason for the Accident Investigation Authority to investigate evacuation conditions more closely. As part of the investigation, SP carried out fire tests with CNG buses in the autumn of 2012 at the Södra Älvsborg Fire and Rescue Services’ training centre at Guttasjön.

The objective of the fire tests was not to create an exact reconstruction of the actual accident: the main purpose was to measure temperatures and gas concentrations in the interior of the bus, i.e. parameters that have an impact on the evacuation conditions. The tests were conducted on one bus at a time, copying the progress of the fire in the bus that was hit by starting the fire at a simulated gas and oil leak in the  engine compartment of the bus. For safety reasons, the gas tanks on the roof of the bus were empty.

In order to obtain an idea of the length of time needed for evacuation of a city bus, two evacuation tests were carried out at SP on a later occasion.

The tests represented one case, in which all the bus doors can be used for evacuation, and a second case in which the driver cannot open all doors or when several are blocked by, for example, a stroller, or by the fire. The trials involved 74 passengers over an age group of 59 to 93. Several of them used mobility aids, including two walking frames with wheels.

Available time for evacuation may be too short

The tests showed that a fire resulting from gas or oil leaks in a bus engine compartment can develop very quickly, from  a limited local fire to one creating critical conditions for passengers on the bus. How quickly depends certainly on many factors, such as whether the engine is running or not, whether the bus is moving, the materials and ventilation conditions in the engine compartment and, not the least, the construction of the partitions between the engine room and the passenger compartment.

In our case of a city bus with the engine not running, high CO concentrations were measured at one of the doors after only 3:13. Evacuation of the passengers took 1:28 with all the doors available for evacuation. In this case, therefore, the driver would have to become aware of the fire and decide to evacuate the bus within 1:45 from original ignition. It is therefore worth noting that, judging by the films and photographs that were taken of the original accident, the spread of the fire in the accident was considerably faster than in the tests.

In the original accident, the fire was detected quickly, since it started as a result of the collision. However, this is far from always being the case:  instead, many fires occur while the bus is moving, and it can take a long time before the fire is detected. The test case without a detection or suppression system shows that it is doubtful whether a driver would have noticed the smoke during the first two minutes of the fire. For this reason, a reliable detection system, generating an alarm to the driver, can be decisive in ensuring a safe evacuation.

The gas tanks did not affect evacuation conditions

The temperatures at the gas tanks’ safety valves were measured during the tests. The results indicated that the valves would have opened after 10 minutes and 43 seconds, which is several minutes after critical temperature and gas concentrations would have been exceeded in the passenger compartment. This shows that the gas tanks, in this example, did not present any danger to the conditions in the bus during the time required for evacuation.

However, the increase in the heat release rate and thermal radiation levels resulting from a fire in the released gas can later affect evacuation conditions and conditions for the fire and rescue services in the area around the bus. This applies particularly if the bus is close to buildings or beneath a roof, such as in a bus station.

Detection and suppression systems make a difference, but must have sufficient capacity

Although the fire suppression system did not extinguish the fire in the test, it had a good effect in slowing down the growth of the fire.  Critical conditions in the passenger area were delayed by about ten minutes, in comparison with the results in the test of the bus without a suppression system. Ten minutes can be decisive in an evacuation situation. Although some of the time difference can be due to minor variations between the two tests, such as wind conditions etc., the difference is nevertheless significant. The large quantity of extinguishant (13 litres) wet the engine compartment and thus delayed the spread of the fire.

The position of the detector, a detection tube in this case, is critical for how quickly the fire is detected. When the tube was enveloped by the flames, the fire was detected after nine seconds. However, positioned further from the fire, it did not detect the fire until after three minutes. The tests show the importance of conducting a thorough risk assessment and properly designing the system when installing detection and suppression systems in bus engine compartments.

The results of the investigation are available in the final report from the Swedish Accident Investigation Authority, which can be downloaded from their website. It concludes with four recommendations to public authorities as given below.

The Swedish Civil Contingencies Agency is recommended to take the necessary steps to ensure that:

Public fire and rescue services develop procedures etc. to ensure that their personnel are trained and have access to the necessary equipment to handle fires in buses in general and CNG buses in particular (RO 2013:01 R1).

The Swedish Transport Agency is recommended to take the necessary steps to ensure that:

Requirements concerning inspection of the fire suppression systems are included in the normal process of vehicle inspection (RO 2013:01 R3).

Professional training requirements for bus drivers include, and must involve exercises in, fire safety and evacuation (RO 2013:01 R4).