A Hot Test: Outbreak of fire in a high bay Warehouse 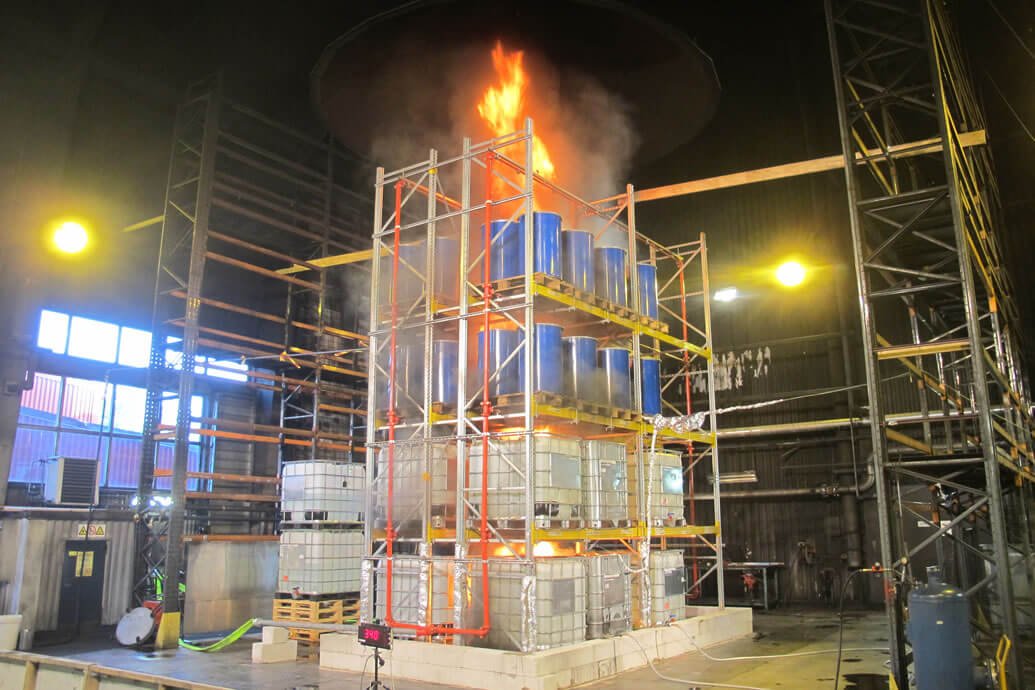 In a spectacular test, evidence has been provided that in the case of an outbreak of fire in a high-bay warehouse full of hazardous materials, extremely efficient extinguishing success can be achieved using compressed air foam.

There are very few facilities in Europe in which large-scale fire tests can be conducted. One of these is Fire Research at RISE Research Institutes of Sweden, which operates a huge firehouse in Borås near Gothenburg. There, Rosenbauer was able to install a hazmat pallet store in order to ascertain under controlled conditions just how suitable a compressed air foam system (CAFS) is for firefighting in such highly sensitive surroundings.

Cafs instead of light foam

Stationary CAFS are in operation in numerous locations protecting machinery, paint cabins, recycling plants and transport belts, to name but a few applications. By contrast, their use in a hazmat warehouse is something new and was the reason for the test in Sweden. To date, the standard type of firefighting in such situations consists of blanketing the entire hall with high expansion foam and thus suffocating the fire. The disadvantage of this approach is that people must leave the danger area prior to the start of extinguishing, which delays the process. Furthermore, the fire services cannot intervene because everything is covered in foam and even with a heat imaging camera there is zero visibility. As a result, trapped persons may suffocate or lose their sense of direction. Moreover, a large store requires massive quantities of extinguishing agents, as exemplified by the fact that ten million liters of high expansion foam would be needed to fill a 1,000 m2-hall up to a height of ten meters (excluding installations).

By contrast, the use of compressed air foam means that only the burning material and its surrounding area are covered and hence cooled and extinguished, without the entire hall being submerged. This enables targeted firefighting and also a marked reduction in extinguishing agent consumption. Furthermore, the fire service can see where the source of the fire is located and intervene at any time in order to conduct people out of the danger zone.

Unlike high expansion foam CAF is not created by means of passive foaming in the branch pipe, or the foam generator, but instead through active foaming in a CAFS mixing chamber. This provides it with its unique quality, as compressed air is sprayed into the water-foaming agent mixture, which results in virtually the entire volume of water forming small bubbles with a high foam surface. Consequently, the water can penetrate deeply into the burning material, thereby creating an excellent cooling effect. In addition, CAF is highly resilient and owing to its homogenous structure adheres well to smooth and vertical structures. It also forms a barrier layer between the burning material and the surrounding air, which interrupts the supply of oxygen to the source of the fire and thus greatly reduces the risk of burn-back.

The pallet store erected by Rosenbauer in the firehouse of the Swedish research institute was 8 m high and full of containers and barrels in which highly flammable materials can be transported and stored. The CAF system consisted of a pressure pump and a mixing chamber with compressed air supply via a compressor, as well as lines installed over the entire high bay shelving and fitted with special CAF full cone spray nozzles. Week-long preparations terminated in a spectacle lasting just a few minutes, as the fire was no sooner ignited than it was very quickly brought under control and effectively extinguished a short time later. The foam enveloped the shelving, containers and barrels with lightning speed and thus gave the fire no chance. This provided convincing evidence that with compressed air foam a very fast, lasting and resource-protective extinguishing success can also be achieved in a hazmat warehouse.