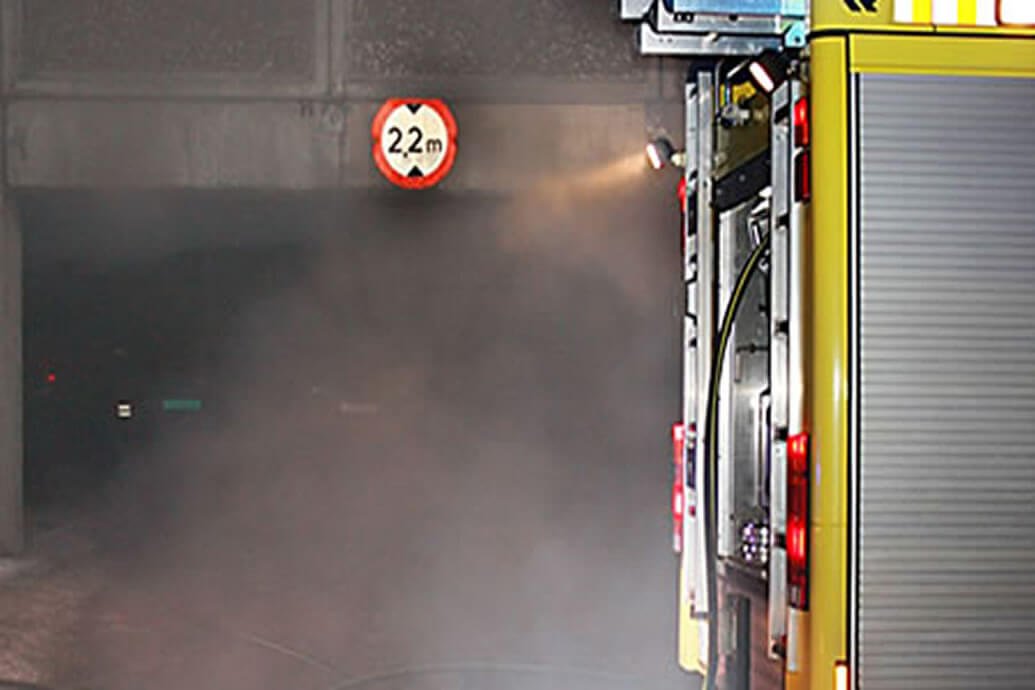 Fire risks related to vehicles in underground car parks – The number of electrical vehicles (EVs) in Norway has doubled each year since 2010 and the first mass-produced hydrogen cars are now available on the market. The increasing use of new energy carriers in the transport sector is an important means to fulfill the government’s effort to reduce CO2 emissions. On the other hand, new energy carriers have different technical fire properties than conventional fuels, which may introduce unforeseen fire scenarios.

The very fast introduction of EVs has led to skepticism among firefighters and inconsistencies related to whether or not car park owners allow parking of EVs together and new gas-energy vehicles in the garages. SP Fire Research has recently published a report regarding fire risks related to vehicles with new energy carriers in enclosed compartments. The report concludes on a need to increase the knowledge related to several issues regarding new energy carriers in car parks.

There have been a number of severe car park fires in Europe during the last 15 years. An enclosed fire in a car park may behave quite differently from an outdoor car fire. In an enclosed fire, the compartment may rapidly be filled with black, hot smoke, which restricts the view and worsens the working conditions for fire personnel.

Compared to older cars, the increasing amount of plastics used in modern cars produces hotter fires that are more likely to spread. This is independent of fuel type, since there is no difference between a fire in a conventional car or in a vehicle with new energy carriers if the fuel or battery pack is not on fire. Still the discussion about car park fires has risen to a new level due to the fast introduction of new energy carriers.

The car park buildings in Norway, not unlike in other countries, have a variety of sizes and geometries and are built over a period of several decades. The entrance of a typical car park is normally too low for fire trucks to enter, which makes the working distance for fire fighters significantly longer than for an outdoor car fire. In general, a car park fire is a challenging fire scenario.

•    There is not sufficient statistical data to conclude whether an EV has a different probability to catch fire than an internal combustion engine vehicle (ICE). Based on statistics, a car fire is in general prone to occur in older cars. It remains to be seen if this tendency is valid for vehicles with new energy carriers, considering their low age. The lack of information and experience on how a car park fire involving an EV battery pack will behave with regard to heat release rate and extinguishing time causes skepticism and uncertainty among users as well as firefighters.

•    The battery sizes (16 – 23 kWh) that have been used in most of the published full scale fire tests are not representative for the largest batteries on the market today. Tesla Model X, for instance, is delivered with batteries up to 90 kWh. The question is therefore whether or not these tests are relevant for the larger battery sizes and different battery chemistries on the market.

•    There is a lack of data on how fast an EV fire may evolve, how well the safety mechanisms of the battery work and how much heat a modern EV releases.

•    Compared to an ICE, tests indicate that extinguishing an EV fire may require more water and longer time. However, the required amount of water, sufficient extinguishing techniques and how long time it will take to extinguish fires in different EV car models are not completely known. Additionally, there is little published information on how an EV fire will behave when impacted by a sprinkler, sufficient water flow, and the type of sprinkler that is best suited to handle such a fire.

•    Thermal runaway (TR) is an uncontrolled chemical reaction which produces a large amount of heat. The process starts when the temperature of a battery cell reaches 130 – 200 °C. The heat from TR may be sufficient to ignite the flammable electrolyte inside the battery. If a battery is exposed to heat above the TR-temperature limit, e.g. in an enclosed fire in a car park, TR will eventually be initiated, but there are no published full scale tests that reveal how fast TR will occur in a typical car park fire.

Fires in gas vehicles
•    Gas driven vehicles have safety systems to prevent the gas from exploding in case of a fire. There have been several incidents where the safety systems have not worked as intended.

•    The gas tanks have a temperature based pressure relief device (PRD) that will release the gas when the surrounding temperature reaches a certain level. In a car park fire, the surrounding temperature may reach 1000 °C, which is enough heat to activate the PRD. However, it is not known how long this may take, and whether the gas may be released without catching fire. If so, gas may accumulate and be ignited at a later time, resulting in an explosion.

•    To our knowledge, Norwegian car parks do not have detection systems for hydrogen gas or sufficient ventilation systems to effectively ventilate a gas leakage.

Car parks should be sufficiently constructed to reduce the consequences of car fires, regardless of fuel types. This requires that new car trends and technologies are continuously followed by research and full scale tests to reveal knowledge of related fire risks and how they should be dealt with.

SP Fire Research will continue to look into challenges related to vehicles with new energy carriers, like fuel cell vehicles and EVs with Li-ion batteries.