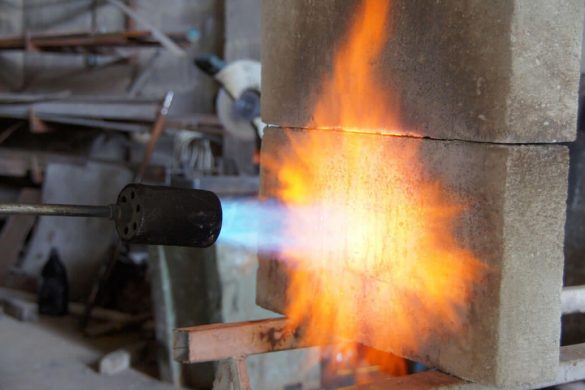 The fire resistance of building materials are often assessed in furnace tests in which the thermal environment is similar to a flashover room fire. In large spaces, like terminals and atria a fire is not likely to develop into the flashover scenario. Instead, fires tend to be local, with large temperature gradients and localized exposure to the construction elements. SP has investigated the thermal exposure of different localized fires to a six metres long steel column. The results show that predictions made from the Eurocode consequently overestimates the thermal impact and that the temperature distribution around the circular column is highly asymmetric. In addition it was shown how the temperature distribution can be accurately calculated using input from plate thermometer (PT) measurements close to the column surface. All experimental raw data can be downloaded from the SP website.

The experiments were carried out in the large fire hall of SP, 20 m by 20 and 20 m high. A 6 m tall circular unprotected steel column with diameter 200 mm and a steel thickness of 10 mm was exposed to circular pool fires with various burning areas. Along the column extensive measurements of steel temperature and temperatures of both plate thermometers (PT) and small thermocouples were made. The fires sources were two diesel fires (Ø = 1.1 m and 1.9 m) and one heptane fire (Ø = 1.1 m). The heat release rate of the fires was estimated to 3.3 and 1.0 MW for the large and smaller diesel fire, respectively.

The PTs and the small thermocouples displayed almost the same temperatures at most positions. Some of these are shown in figure 2. The similarity is probably a consequence of a large engulfing flame and high gas velocities. For the large diesel fire the temperature at 1.2 m above the fuel surface varied between 900-1000 °C in the position of highest thermal impact, i.e. the position in which the flames tilted.

The thermal impact to the column can be predicted according to the technical rules specified in EN 1991-1-2 Annex C, “Localised Fires”. However, the Heskestad plume equation used in this chapter overestimates the plume temperatures compared to the measured results. This leads to an overestimation of the temperatures for the exposed steel structure of several hundred degrees at times.

The PT temperatures were used to first calculate the Adiabatic Surface Temperatures (AST) of the fire in all positions. Thereafter, a 2D finite element model (FEM) was created in order to calculate the thermal distribution over the column. The internal heat transfer was also considered in the model. However, thermal conduction within the steel cannot account for the total thermal transport experienced in the tests. Thus, also internal surface-to-surface radiation was considered. The results show a very good comparison between the experimental values and the simulated ones at 2 and 4 metres.

Spreadsheet data of steel temperatures, fuel mass loss as well as PT and small thermocouple temperatures for all three fires can be downloaded from the SP website: http://www.sp.se/en/index/services/localized_fire/sidor/default.aspx.

The analysis is published in a report available online Thermal exposure to a steel column exposed to localized fires SP report  and will appear in Journal of Structural Fire Engineering.