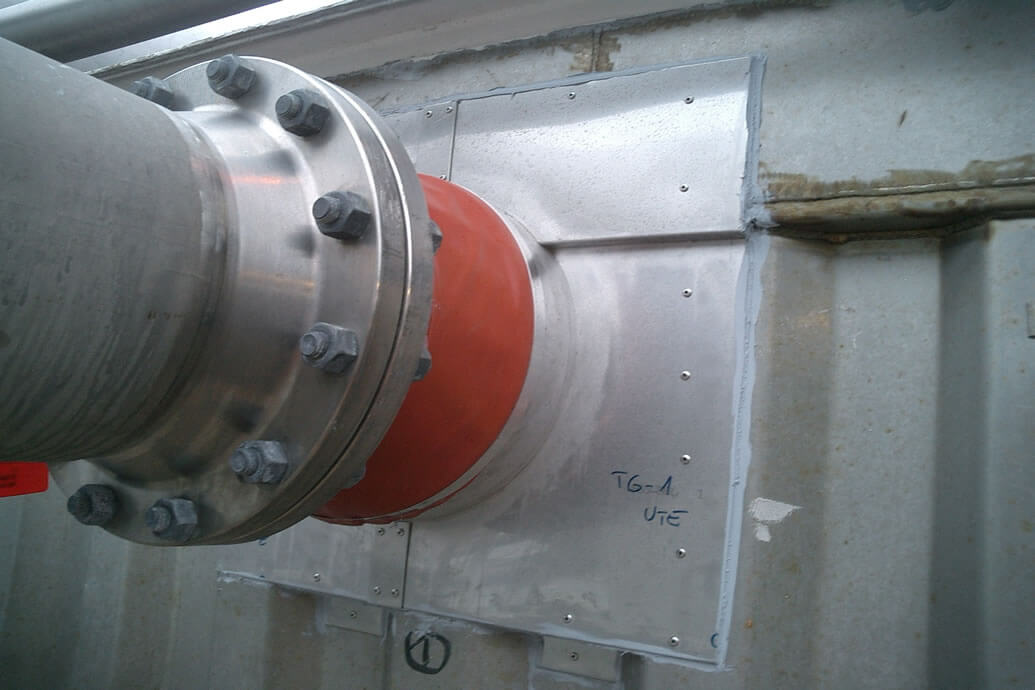 Introduction: Nowadays buildings are fitted with numerous technical installation services for power supply, computer networks and transportation of water and sewage. In many cases these services penetrate fire separations in places that are mostly hidden away above ceilings and in alcoves. Since they are usually hidden from plain view it is especially important that penetration is fitted with suitable protection that fulfil the fire safety requirements.

What are penetration seals?

Generally, a penetration seal is a system to maintain the fire resistance of a separating element at the position where technical services pass through. More specifically, these services are pipes and electrical cables (including  bus bars and coaxial cables), but not ventilation systems. One condition is that the services actually pass through the separating element, thus an electrical socket is not a penetration but is part of the partition.

The European Committee for Standardisation (CEN) has developed standard fire resistance tests for service installations, for penetration seals in standard EN 1366-3. The edition currently in use was published in 2009. This standard describes a method of test for assessing the contribution of a penetration seal to the fire resistance of separating elements. The technical installation services that are currently covered, represent services that can commonly be found on building sites in Europe, such as cables and pipes in various configurations.

During the fire resistance test, assessments are performed to determine the integrity and insulation performance of the separating element, the sealing system and the penetrating services. The worst result obtained determines the result of the sealing system. The integrity criterion is determined by using cotton pads to capture hot gases escaping through cracks and by visual observations of sustained flaming, which is defined as continuous flames on one location for a minimum duration of 10 seconds. The insulation criterion is determined by measuring the surface temperatures on the non-exposed face of the separating element, where a temperature rise of 180 K generally constitutes a failure.

As part of CEN’s revision cycle, this particular test standard is undergoing extensive changes to make it more user friendly and better suited to products that are currently in the market. Through continuous testing and new insights, some of the current rules will change and new rules will be added for more widely used services such as conduits containing cables.
If all goes well the revised test standard will be published late 2015.

European regulations
With the full implementation of the Construction Products Regulation (CPR) on July 1, 2013 manufacturers of constructions products have the obligation to CE mark their products when they bring them into the market in European member states. But this is only applicable if that specific product is covered by a Harmonized European Product Standard (hEN); penetration seals are not covered by a hEN at the moment. However, it is still possible to obtain a CE mark for such products, but the products characteristics must be based upon a European Assessment Document (EAD). For penetration seals the European Organisation for Technical Assessment (EOTA) has developed European Technical Approval Guideline N° 026 (ETAG N° 026), which serves as an EAD. In addition to the fire resistance of the product or system, other product characteristics such as durability and serviceability, airborne sound insulation or reaction to fire class can, and sometimes have to, be determined. An obtained CE mark is a way for the manufacturer to declare the material properties, it is not a quality mark.

Some key players in the European market have already obtained European Technical Assessments (ETAs) for their penetration seal systems, which makes it easier to sell their products on the European market. Without these ETAs they would have had to obtain national approvals in separate European member states.

SP Technical Research Institute of Sweden
SP has testing facilities to determine the fire resistance of penetration seals in all possible configurations, in both vertical and horizontal constructions. Also, testing for offshore applications according to the International Code for Application of Fire Test Procedures (FTP Code) is part of SP’s services.
In addition to fire resistance testing, all other product characteristics mentioned in ETAG N° 026 Part 2 can be determined by SP. And to conclude the process for CE marking, SP can issue the ETA and CE Certificate.