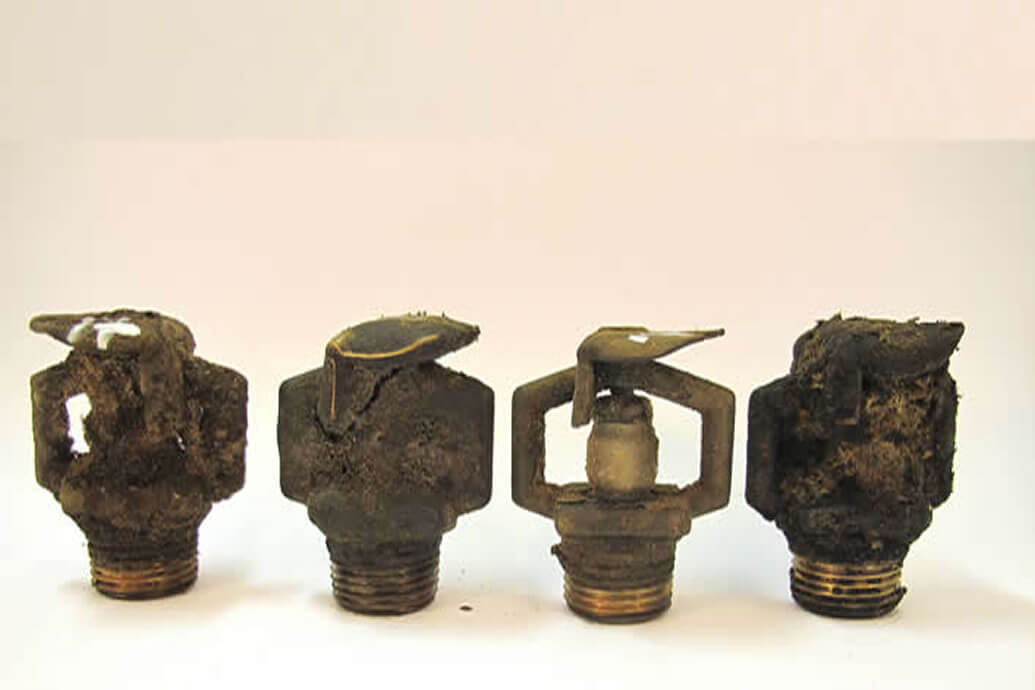 For several years, SP Fire Research has performed sprinklers field sampling testing  which have been disconnected from sprinkler systems in Sweden and Finland. Results show that most sprinklers perform satisfactorily, but that it is relatively common for thermal sensitivity of the sprinklers to exceed acceptable values.

According to the Swedish standard for water sprinkler systems, SS-EN 12845:2015 ‘Fixed firefighting systems – Automatic sprinkler systems – Design, installation and maintenance’, and The Swedish Fire Protection Association’s (SFPA) supplementary document SBF 120:7, ‘Regulations regarding automatic water sprinkler systems’, inspections should be carried out no more than 25 years after installation. For dry pipe systems, the requirement is 10 years. In addition to an inspection, the sprinkler samples should be disconnected and tested. At least 20 sprinklers of each type should be tested in order to form a sufficient basis for an assessment of the performance of sprinklers in the real system.
The sample is considered to be representative of all installed sprinklers, and should be randomly selected. If the environment of the section or space in which a sprinkler is placed is considered to be unusual for any reason, or if a sprinkler shows signs of manipulation, that sprinkler may be specifically selected.

According to the recommendations in SS-EN 12845:2015, sprinklers should be assessed with regard to:
a)    Operation.
b)    Operation temperature.
c)    Change of K-factor.
d)    Impact on spray pattern by damages or deformation.
e)    Impact on spray pattern of parts that are caught on the sprinkler frame arms or deflector plate at activation (‘lodgement’).
f)    Sensitivity to heat (RTI value) of the sprinkler’s thermal device.

The operation temperature is usually measured for between four and six sprinklers, and the RTI value for the remaining sprinklers. During the measurement of the RTI value, the sprinklers are pressurised with water, which thus also tests performance, as well as if parts are caught on the sprinkler frame arms or deflector plate at activation (’lodgement’).

Figure 2: Existing sprinkler manufacturers among the tested sprinklers. Here, it is shown that a few manufacturers have dominated the Swedish and Finnish markets.

Visual examination and assessment is conducted for all sprinklers, before and after testing. Any actual testing of the K-factor is not performed unless visual examination gives cause for it; for example, if the sprinkler’s inlet is obstructed.

All information about the sprinklers, along with the results of the tests, is entered into a database, and some of the results so far are presented in this article. At the time of writing the database contains information from the testing of just over 1200 sprinklers.

Which manufactures have been tested?

Figure 2 shows which sprinkler manufactures that were represented in the tests. It can be seen that some manufacturers – Grinnell, Reliable Automatic Sprinkler Co. (RASCO), GW Sprinkler A/S, and Viking Corporation –  have dominated the markets historically. In a few cases, it was not possible to determine the manufacturer.

Other information about the sprinklers and systems

Perhaps the most serious malfunction involves cases in which a sprinkler does not activate at all, or if a greater water pressure is required in order for the valve to open. Such malfunctions are relatively uncommon; they occurred for just under 3% of the sprinklers. Examples of causes of this include paint on the valve, the sprinkler being covered with fibres, use of an O-ring seal, or damage to the sprinkler glass bulb. One example of sprinklers that were covered in cellulose fibres is shown in Figure 3. The sprinklers were installed in a paper mill, and manufactured in 1980.

A more common malfunction, and one which is not as visually obvious as that discussed above, occurs when the thermal sensitivity (RTI value) of the sprinkler exceeds what can be considered to be an acceptable level. Just over 10% of the sprinklers that were tested malfunctioned in this this way. There is often a connection between a heightened RTI value and a heightened activation temperature, and for this reason it is important for the sample to contain a sufficiently high number of sprinklers, so that both of these properties can be tested.

A change in the K-factor is normally determined visually, by inspecting the sprinkler’s inlet and orifice opening. In cases where there is some doubt, a flow test can be performed, but this has so far never been deemed to be necessary. The normal scenario is that inlets are coated with a thin or very thin layer of deposits. In cases where more sediment has been noted, it is most often so loosely attached that it is flushed out upon activation. In a real sprinkler system it is, however, important that the pipe system is flushed clean, so as to avoid clogging of the sprinkler.

Negative impact on the spray pattern caused by parts that are stuck on the sprinkler frame arms or deflector plate at activation (’lodgement’) is also highly uncommon. It is, however, a possibility that comes under greater scrutiny during type approval testing today than in the past.

Mechanical damage to primarily the deflector plate can occur, but this is often probably not systematic but the result of individual sprinklers being damaged at or after installation. If it occurs frequently in a real installation, the sprinklers should, naturally, be replaced.

Unfortunately, SS-EN 12845:2015 does not contain any recommendations as to when a renewed control should be performed. However, intuitively speaking, the interval should be shorter than 25 years, especially if the interval for the first testing was exceeded or the sprinklers are placed in a harsh environment which is likely to affect their functioning properly.

This article was provided by SP and published in Brandposten.

Main Image: Sprinklers that have been installed in a paper mill and which are covered in cellulose fibres to varying degrees.