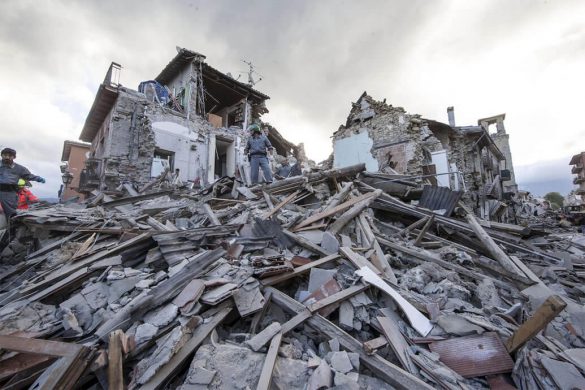 Earthquakes can cause catastrophic loss of life. Certain regions of the world, because of their unfortunate close proximity to a tectonic plate boundary, have experienced many strong earthquakes throughout history. However, the secondary effects such as Post-earthquake fire risks can cause more damage than the primary earthquake event itself. Despite the inevitability of earthquake occurrence, understanding the relevance of fires in earthquake death toll could save many lives. These journal articles detail risk factors and prevention methods for fire spread after an earthquake event.

The Great East Japan Earthquake that occurred on 11 March 2011 was the largest earthquake in recent Japanese history, and resulted in the generation of large amounts of disaster waste. As a result, many ‘outdoor storage areas’ were established within disaster areas. These piles include various combustible materials such as wood, paper, and plastics, as well as non-combustible materials from destroyed buildings. More than 30 fires occurred in succession at waste storage areas in the Tohoku region, from May to September 2011. One of the causes of these fires is believed to be the proliferation of microorganisms and fermentation of organic material present in the waste piles; the heat generated during fermentation may ultimately result in spontaneous ignition. In this study, we collected samples from outdoor storage areas at which fires have occurred. We then conducted thermal analyses to obtain basic data, and finally developed safety measures to prevent the recurrence of fire. Based on the results, it was reveal that when the amount of heat generated exceeds the amount of heat discharged, the possibility increases for the heat of fermentation that arises from the rotten tatami mats and wood chips and the like to trigger of spontaneous ignition. Read the full article here.

An evaluation method for urban post-earthquake fire risk is presented. Urban fires and urban evacuations are highly dependent on uncertain factors, such as the number and locations of fire outbreaks, the wind velocity and direction, and the population distribution. To implement effective measures to ensure the safety of buildings and individuals in fires, a method to evaluate the effectiveness of the various safety measures that consider the influence of the uncertain factors is essential. Risk is introduced into the proposed method, in which the risk is defined as the probability that the ratio of burned-down buildings or fire fatalities in a district will exceed a threshold within a given time period after an earthquake. The risk is calculated by a combination of Monte Carlo simulation and physics-based fire-spread/evacuation simulation, in which uncertainty is considered in the following inputs: (1) the number and locations of fire outbreaks; (2) the firefighting at the initial stages; (3) the weather; (4) the earthquake-related structural damage to buildings; (5) the initial evacuee locations and (6) the obstruction of roads. In this paper, the risk of Kyoto City was evaluated for eight types of inland earthquake to demonstrate the use of the model. As a result, the effectiveness of countermeasures that improve the fire resistance of buildings could be quantified in terms of risk reduction. This result indicates that the method could be an effective tool for disaster prevention. Read the article here.

Fires following earthquake (FFE) are dangerous secondary disasters occurring after large earthquakes, leading to severe property and life losses in certain cities with dense wooden buildings. In order to explore the complicated behavior of fire-spread and to assess the fire-induced losses after a large earthquake scenario, an integrated software system based on GIS (called GisFFE) was developed to perform a dynamic simulation of FFE. The purpose of this paper is to introduce the details of GisFFE, including its architecture, models and simulation flow, and to present a case study. The architecture of GisFFE consists of 4 components: an urban geo-database, a model library, a simulation center and outputs. The urban geo-database provides basic spatial and statistical data used in the GIS platform for FFE simulation; the model library contains three sub-models (ignition, fire-spread and fire-suppression models), which correspond to the three key stages involved in FFE; the simulation center serves as an operation center that integrates data and models; after the simulation is complete, statistical maps and charts are the resulting output. Read the full article here.

Extracts taken from articles published in the Fire Safety Journal.