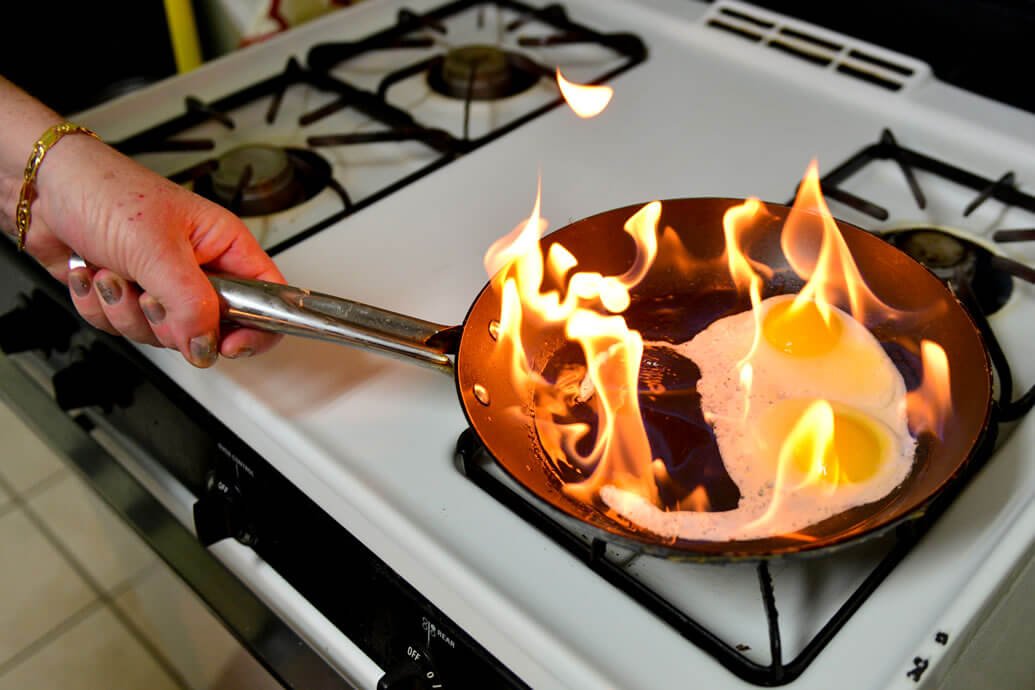 The European Union published its new standard for stove guards (EN50615) at the beginning of March this year. The new EU standard introduces minimum requirements for all cooker safety products, aiming to decrease the amount of kitchen and house fires across Europe.

Cookers: a major cause for house fires

Cookers cause over a half of house fires in the OECD countries (1). The fires are usually caused by user errors and risky usage habits (2), and could be prevented with high quality cooker safety products. Cooker fires are especially worrying because of toxic gas formation and fire spreading rapidly: the formation of toxic gases starts a long time before the fire ignites. Toxic gases, carbon monoxide and hydrogen cyanide (HCN) are responsible for 60 – 80% of fire deaths (3).

A smoke alarm was present in 66% – 84% of larger and more serious fires that started from a cooker (4). However, traditional smoke alarms do not always effectively help in preventing serious fires, as they are not equipped with a functionality to shut off cookers in case of danger. Furthermore, smoke alarms are not recommended for kitchen use in general, as they do not react quickly enough in case of real danger and can produce false alarms.

This is where modern, standard-complying stove guards step into the picture: by monitoring the cooker’s temperature, they are able to identify dangerous situations even before toxic gases are produced and a fire can start. The most advanced models even self-adjust to the user’s cooking, resulting in improved alarm accuracy and extra safety. In general, more widespread use of standard-complying stove guards could contribute to a significant decrease in the number of kitchen fires everywhere.

The new EU standard: ensuring the quality and safety of stove guards

Until recently, the lack of commonly agreed specifications for stove guards and other cooker safety products has slowed the spreading of new fire safety solutions.

The European Committee for Electrotechnical Standardization published the standard EN50615 on 6th March 2015, giving specifications for cooker safety products in the EU. Safety devices that meet the standard’s requirements prevent kitchen fires effectively. The new standard brings clarity to the market and acts as an aid in purchase decisions for those wishing to improve fire safety in their homes.

The standard is a welcome addition in many ways, the main reason of course being the amount of kitchen fires being so high, despite the advancement of cooking technology. Even modern induction cookers are not as safe as is usually presumed: their use can result in fast, explosive fires caused by faulty or wrong kind of pots or pans.

The new standard also helps consumers in understanding what a stove guard or cooker safety device really means and what kind of protection can be expected from using it. There are currently several different products being sold in the market as stove guards, each offering various levels of protection, with differences in operation and reliability. For example, stove turn-off timers – currently sold as “stove guards” – do not offer comprehensive protection from cooker fires, as they only help in turning off a cooker that has been left on for a long period of time. Also, devices (some of them also sold as “stove guards”) that monitor user presence in the kitchen can in some cases, due to the implied minimum time limit, not respond fast enough to prevent a fire.

The new EU Standard for cooker top fire prevention has been developed by a working group made up of leading European manufacturers and policy makers. The standard introduces minimum requirements for stove guards, grouping the stove guards into three distinctive categories:

To meet the new standard, a stove guard must be able to cut off the cooker’s electricity supply before the temperature on the cooker reaches 320°C. Furthermore, for a minimum of 10 minutes after the cut-off, the temperature must not exceed 350°C. Electricity cut-off must not be triggered by a false alarm.

Stove guards must disconnect the appliance from the supply before ignition, and give an audible warning of at least 65 dB for a maximum of 15 seconds, during which time the electricity supply must be cut off.

Norway: first to introduce a law for stove guards

The current hotspot of stove guard research and development is in the Nordic Countries. In 2012, long before the new standard came into effect, Norway passed a law – the first of its kind in the world – that requires all new kitchens with electrical cooking tops to have a stove guard installed. Norway has traditionally been a forerunner in fire safety, and the country’s high percentage of wooden buildings with difficult access (often in mountainous areas) has likely had an additional effect on the law being passed.

In Finland – another international forerunner in fire prevention and stove guard development – the company Innohome has developed its Stove Guard products for over 10 years. Innohome’s products are the first cooker safety products to have been demonstrated to fulfil the standard, tested in a third-party, accredited test laboratory.

“For the development of the whole industry – and of course, even more importantly, for better safety of kitchens and homes everywhere – it is critical that the quality and safety requirements for stove guards are the same for everyone. This means that customers can be sure to trust the safety of the stove guard products they invest in”, says Matti Myllymäki, founder and Technical Director of Innohome, the first company with standard-fulfilling stove guards.

“We were honoured to be a part of the EU Standard Committee, and are proud to have had an effect on the new standard for stove guards. The whole standardization process was extremely interesting and eye-opening. As an example, we were surprised by how potentially dangerous even the most modern induction cookers can be in certain situations. There is still a lot of work to be done, but we are glad that our products comply with the standard and lead the way in offering better fire safety for homes everywhere”, adds Myllymäki.