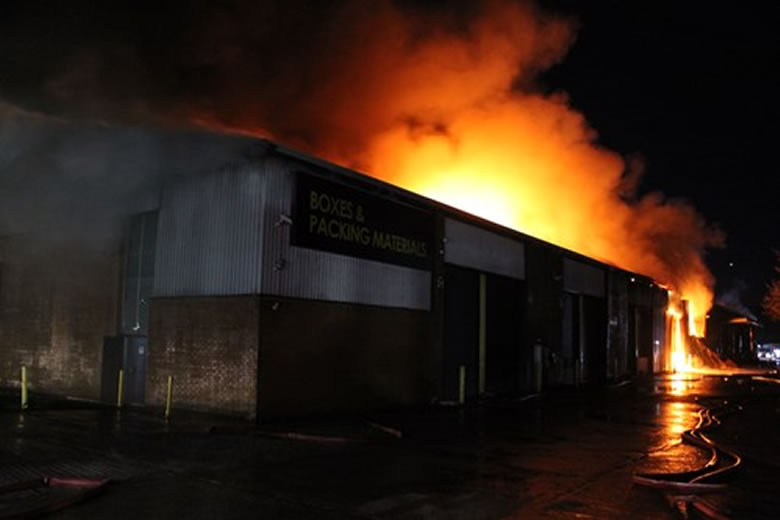 The Greater Manchester Fire and Rescue service was called to a large fire which broke out at a self-storage warehouse in Cheadle. Destroying hundreds of rented units, the blaze once again brought into sharp focus the wider impact of fire and the vulnerability of unsprinklered buildings.

A major incident was declared when over 130 firefighters and 25 fire engines were called to battle the blaze at the Armadillo Self Storage facility on February 26th. The fire brought disruption to the local area, with the building close to an arterial road out of Manchester, and residents were forced to shut all windows due to smoke. Fortunately, there were no fatalities, but the wider impact to the hundreds of people who had rented units and lost stored goods will be felt long after the fire was extinguished by the fire and rescue service. With two units in the facility, Armadillo Self Storage customer Dipple Tipple and Co reported losing all the stock from its spirit business with only a delivery van, a laptop and some tablecloths remaining.

These fires are challenging to contain due to the large quantity of furniture and often unknown materials which are normally tightly-packed into facilities of this type. These incidents create large fires that burn hard for a long time, creating a lot of smoke which in this case could be seen across Manchester.

The fire in Cheadle follows similar fires from the Safehouse fire in 2017, Shurgard as we left 2018 and through to the Twinwoods Business Park fire in 2019 and Denton fire in 2021. The catastrophic Shurgard Self Storage fire in Croydon destroyed every one of its 1198 storage units. The site was un-sprinklered and the cause of the blaze was filed as undetermined. Shurgard’s replacement four-storey facility opened in 2020, with the owners making the decision to include sprinklers in the rebuild despite not being required to by building regulations.

“One of the big questions with these self-storage facilities is how anyone can claim protection against fire based on the light separation between units and the lack of knowledge of what people are putting into their individual units,” said Iain Cox, Chair of the Business Sprinkler Alliance. “Can self-storage operators assume that a fire will be contained in such circumstances and therefore offer comfort to their customers?”

Fire incidents tell us a lot about the challenges of such concentrated amounts of combustible storage and the challenges to firefighting by the fire service to contain them without the early intervention of systems such as sprinklers.

Sprinklers are a proven method of controlling fires. They allow fire crews time to safely gain access and extinguish the fire. The BSA welcomes their consideration as a way of ensuring that properties of all types are adequately protected.

By Iain Cox, Chair of the Business Sprinkler Alliance, for more information about the BSA visit the www.business-sprinkler-alliance.org