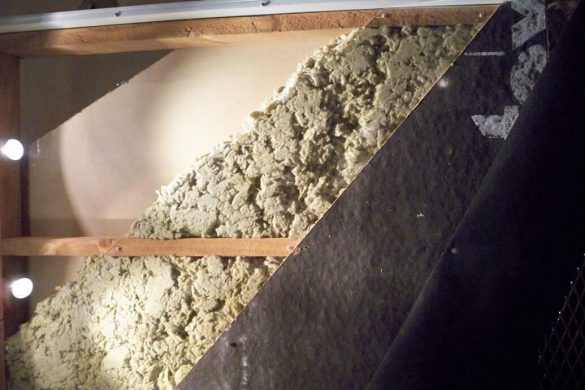 Insulation can trap the heat from a fire and prevent the fire from spreading.  But is the behaviour of the fire within the space affected by how well it is insulated?  This was the central question in a Insulation Fire Test dissertation, and of particular relevance due to the increasing number of low energy buildings.

The initiative for the work of the dissertation came from SP Fire Technology, which was looking for better understanding of the development of fires in vessels built from thermally insulating composite materials.  The work, which was carried out by Anna Back as conclusion of her fire safety engineering degree at Lund University, was extended in scope towards more general application in order to be applicable to ships as well as low energy buildings.

A test arrangement was designed, with the aim of identifying potential differences in the development of a fire.  This design was then used as the starting point for modelling and full scale tests carried out by SP Fire Technology.  A standard 20 foot steel container, which was either insulated with mineral wool on the outside (see Figure 1) or not insulated at all, provided the fire room in the tests.

Parameters measured during the tests included the gas temperatures in the container and the heat release rate from the fires.  The test arrangements are illustrated in Figure 2.

Effect on the fire development

The rapid progress of the pool fire was due to the fact that heptane easily evaporates into flammable gases when heated, while wood must be thermally broken down before flammable gases are generated.  Increased combustion resulted in higher temperatures, further increasing combustion, resulting in gas temperatures in the insulated container several hundred degrees higher than in the non-insulated container.  Figure 3 shows how the heat release rate in the heptane tests was affected by the insulation.

Calculations and computer simulations of the fire developments were also performed, both before and after the tests.  However, both manual calculations and computer simulations are very sensitive to the quality of the input data, to the extent that the results generally failed to agree with those from the experiments.  Many of the available models require a heat release rate curve as an input parameter, but even with the correct curve many models failed to deliver satisfactory results.  Manual calculation based on the MQH method  gave equally good results as the FDS simulations (which are considerably more time consuming) when the values for heat release rate and material properties were uncertain.  In purely general terms, the modelled results showed themselves to be incapable of representing complex fire spread and fire growth behaviours of the kinds encountered in this experiment.

Anna Back’s dissertation is entitled ‘Fire development in insulated compartments: Effects from improved thermal insulation’ and can be downloaded from www.brand.lth.se.  Supervisor at SP Fire Technology was Franz Evegren.