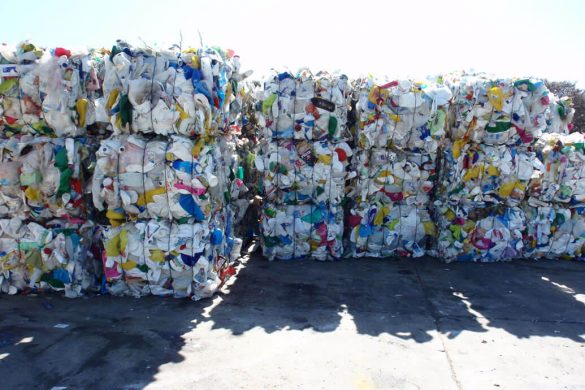 During the spring of 2013, SP conducted a series of ignition tests of waste bales, carried out as part of PhD candidate Mohammad Asim Ibrahim’s investigations of fire risks in waste depots. The work was performed in conjunction with Linné University in Kalmar as part of the remit of the fuel storage safety competence platform. The main aim of the tests was to detect differences in ignition behaviour depending on incident radiation and the amount of plastic used to wrap the bales.

Waste plays an important part in today’s society as a source of recyclable and/or recoverable materials, or to provide as much energy as possible. However, one problem with organic waste is that it can self-ignite when kept too long in storage.

For several years, Mohammad Asim Ibrahim has investigated the effects of baling on waste. His PhD project has concentrated primarily on how waste should be handled in order to avoid self-ignition. His work shows that, between 2000 and 2010, the costs resulting from such self-ignition have amount to almost SEK 50 million, and that this cost could be reduced by baling.

When baling waste, plastic is often used as the baling medium. However, the amount of plastic used, and how it could contribute to, or protect against, self-ignition, the spread of fire and higher fire loading in the case of a fire, have never been investigated. These tests used low density polyethylene as the baling medium.

Several scenarios were simulated during the tests. The first scenario simulated a fire occurring in the vicinity of the bale. Using a radiant panel, heated with LPG, this test was carried out with a continually increasing rate of thermal exposure, from zero to 15 kW/m² over about ten minutes. The same approach was used for a few test with 20kW/m2. Another scenario that was simulated represented the immediate effect of two thermal exposures, 15 and 20 kW/m², to represent the effect of exposing the bale to these high thermal radiation powers without rising gradually from zero. Tests were repeated in order to check that they had produced relevant result values.

Tests were also carried out to simulate the effect of a grass fire. The ignition source consisted of two smaller cubes of porous wood fibre sheets, soaked in heptane in accordance with an IMO standard.

It is mainly the contents of the bale and the intensity of the incident thermal radiation that determine the bale’s time to ignition. In the scenarios in which the entire bale is exposed to thermal radiation, the plastic on the side exposed to the radiation melts away relatively quickly, without seeming to have any greater effect on ignition. However, in the case of small local ignition, such as from a grass fire, the plastic does provide some help in spreading the fire. Another parameter that played a major part in determining the ignition time was that of the composition of the bale. Some bales were better packed, while others were somewhat more porous. The porosity meant that waste often fell out of the bale when exposed to heat. Heated waste fell out of the bale, exposing new, unheated surfaces, which delayed ignition. There was a substantial difference in time to ignition between 15 and 20 kW/m² exposure. When exposed to 20 kW/m², bales ignited considerably more quickly than when exposed to 15 kW/m².