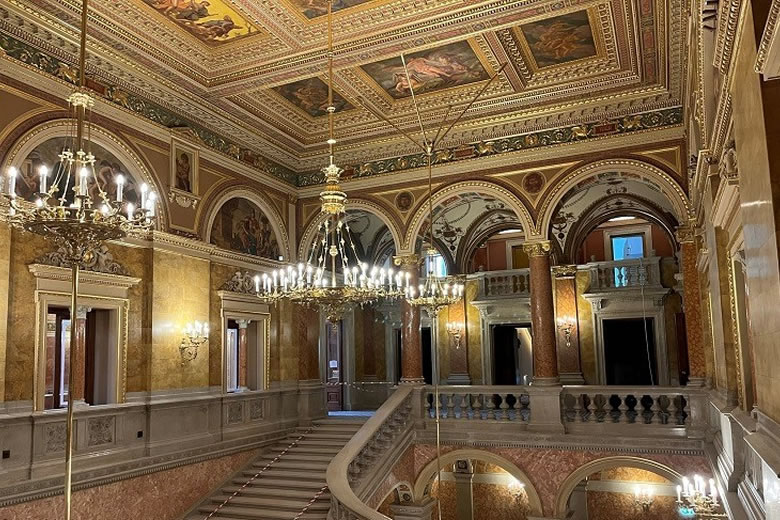 After 15 years of reliable service at the Hungarian National Opera in Budapest, the Securiton fire alarm system has been replaced by an up-to-the-minute safety solution. Hungarian subsidiary Securiton Kft has equipped the renowned building with high-quality SecuriFire, SecuriStar and SecuriSmoke detection systems.

Following almost five years of construction at a cost of some EUR 155 million, the Hungarian State Opera House in Budapest reopened in March 2022 with a festival lasting several days. The listed Neo-Renaissance-style building is Hungary’s largest opera house and one of the most highly regarded of its kind in the world.

Securiton has a long history in Hungary. The first scattered-light smoke detectors from Hekatron were approved in 1975, and the partner there has been installing Securiton fire alarm control panels and optical smoke detectors since 1983. This successful partnership resulted in the founding of the subsidiary Securiton Kft in 2007. In the same year, Securiton Kft announced the installation of a SecuriPro fire alarm system with several SecuriRAS aspirating smoke detectors.

After 15 years of extensive renovations, the Securiton fire alarm system in the prestigious building was brought right up-to-date with the installation of state-of-the-art products. In addition to the renovation of the facade, the decor, the decorative lighting and the roof of the building, a new SecuriFire fire alarm system was also installed. It comprises several networked control panels, 1800 SecuriStar multi-criteria detectors and 25 intelligently integrated SecuriSmoke ASD 535 aspirating smoke detectors. The fire alarm system was handed over in March 2022 and opera performances are already underway once more. Its 139th season finds the Hungarian State Opera presenting more than 500 performances and programmes of various kinds.