Fireproof Artwork in the UN Building in New York 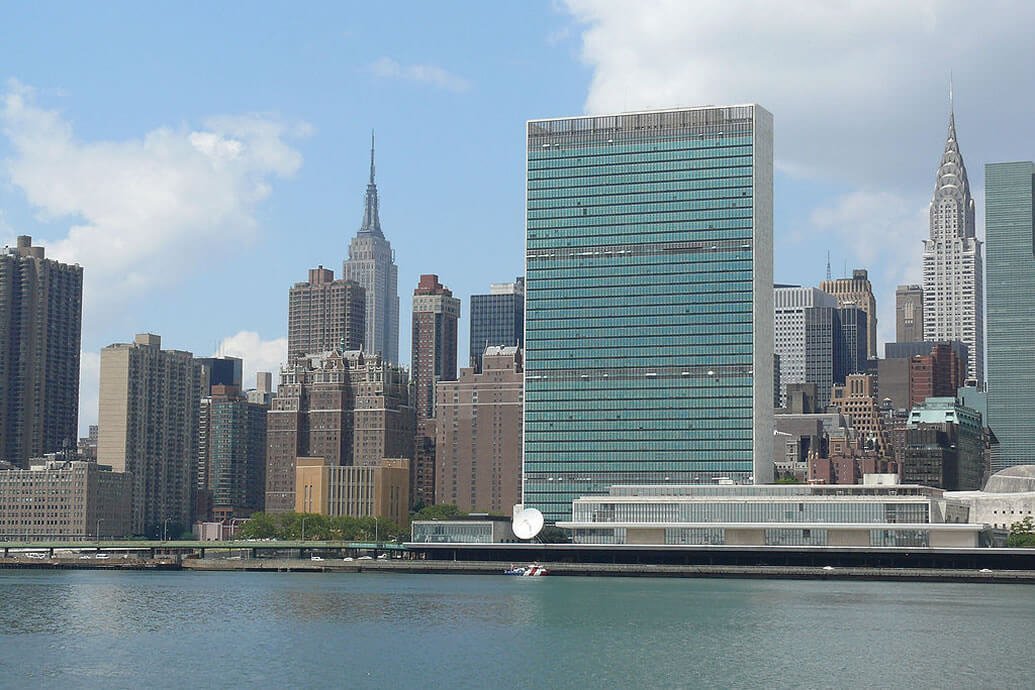 The 22nd of April 2013 saw the unveiling of the ‘Dialogos’ artwork in the UN Building in New York by Sweden’s Minister for International Development Cooperation Gunilla Carlsson, in the presence of the UN Secretary-General Ban Ki Moon and Assistant Secretary-General Jan Eliasson.  The artwork, in the form a long woollen fabric curtain (7 x 25 m) was designed by Ann Edholm and made by H V Ateljé in Stockholm.  However, it had been a long road to reach this point, involving many decisions and obstacles, which included a fire test in accordance with American standards. This permits the canvas to be recognised as a fireproof artwork.

The UN Headquarters Building Complex in New York, completed in 1952, has been under renovation since 2008.  After over 50 years’ use, the buildings were badly in need of renovation by the beginning of the current century.  The Capital Master Plan for the Renovation of the United Nations (CMP) faces a difficult and enormous task – particularly as the work and activities of the UN must not be hindered.  Two buildings have been completed by 2013:  the Secretariat Building (the actual ‘UN skyscraper’) and the Conference Building.  However, this does not complete the work:  the General Assembly Building is next in line for renovation.

The UN headquarters buildings were designed by Wallace Harrison, assisted by a group of world leading architects, including Le Corbusier, Oscar Niemeyer and Swede Sven Markelius.  When the Conference Chambers in the Conference Building were to be fitted out, the Secretary-General at the time, Tryggve Lie, suggested that the Nordic countries should perform the design work and provide the interior fittings as a gift to the UN.  Norway’s Arnstein Arneberg designed the Security Council Chamber, and Dane Finn Juhl designed the UN Trusteeship Council Chamber.

The largest chamber, that of the Economic and Social Council (generally referred to as ECOSOC) was designed by Sven Markelius and provided with furniture, carpets, the marble floor and wood panels from Sweden.  However, the largest and the most striking element was the large curtain in warm red, orange and violet tones hanging in front of the large window on to the East River.  Designed by Marianne Richter, the work of weaving it involved ten weavers at Märta Måås Fjetterström AB in Båstad for a year.  At that time, it was the largest and most expensive textile work of art that had been created in Sweden.

In the same way as with other items in the UN Headquarters, and in accordance with the City of New York’s fire protection regulations, Marianne Richter’s curtain was fireproofed when it was hung in 1952.  However, after only a few years, complaints started to arise concerning the appearance of the curtain, as its fireproofing treatment had caused it to shrink and it was now showing signs of falling apart.  It was sent back to Sweden for conservation.  Statens Provningsanstalt – SP’s original body – found that the particular fire retardant (Flamex) that had been used, consisting of ammonium sulphamate and other substances, was a contributory cause to the poor condition of the curtain.  Together with the effects of heat and strong light from the window, the flame retardant’s salts were breaking down the textile material.  Washing the curtain with water in Sweden failed to cure the problem, and the curtain remained a constant worry until it was finally taken down for good in 1988.

In 2008, the UN asked Sweden for help in dealing with ECOSOC when it was finally due for renovation.  The work was handled by the Swedish National Heritage Board, working in conjunction with the Public Art Agency, Moderna Museet, and the Ministry for Foreign Affairs.  It was decided to replace the curtain with a completely new textile work of art.  Four artists were invited to compete for the design of the curtain, which would be Sweden’s gift to the UN.

But how would the problem of the UN’s very stringent requirements in respect of safety, which include requirements in respect of flame retardant treatment, be dealt with?  The Swedish National Heritage Board had previous experience of other textile works of art that had been destroyed by fire retardants.  Sweden wanted the new curtain to have a good expectation of life, capable of being hung for at least 60 years – i.e. until the next renovation would be due.  This could not be reconciled with experience of the life of textile works of art that had been treated with flame retardants:  retardants were still being used, of essentially the same type that had damaged Marianne Richter’s curtain, i.e. using nitrogen or phosphor-based salts.  The Board’s Conservation Science Department started an investigation that has now resulted in a report ‘Sustainable textile art?’ and general advice (www.raa.se/vardaval) as well as a Preventive Management Plan for the artwork and furniture in the ECOSOC..
SP Fire Technology was brought in to discuss technical aspects and to assist in communicating with CMP and the fire authorities in New York.  In parallel with the Board’s investigations, SP Fire Technology’s Per Thureson discussed the conditions in ECOSOC with colleagues in the USA.  What were the rules?  How should the rigorous safety requirements be dealt with?  Was there any way in which flame retardant treatment could be avoided?

The artists invited to compete for the design were given suggestions as to which materials would be the safest to work with.  Natural materials, such as wool and silk, have good fire resistance properties, and the winning artist, Ann Edholm, submitted a design for a 100 % wool curtain, lined with Trevira CS (a polyester material with an inherent flame-retardant property).  In order to provide a further demonstration of the resistance of the curtain’s materials to easy ignition, it was decided to submit it to a full-scale fire test in the form of the Steiner Tunnel test, ASTM E 84-12.  The test was performed by the South West Research Institute in San Antonio in Texas.  When the 7 x 1.5 m large test piece passed the test with relatively good results, the UN decided that the curtain would not need to be treated with flame retardant.

After several years’ work – and not least with considerable challenges in transporting and hanging the curtain in New York – it was finally time for the now fully restored ECOSOC Chamber to be re-inaugurated, supported by the unveiling of ‘Dialogos’ – Dialogos, to encourage conversation.

Margareta Bergstrand
Consultant (previously with the Swedish National Heritage Board)