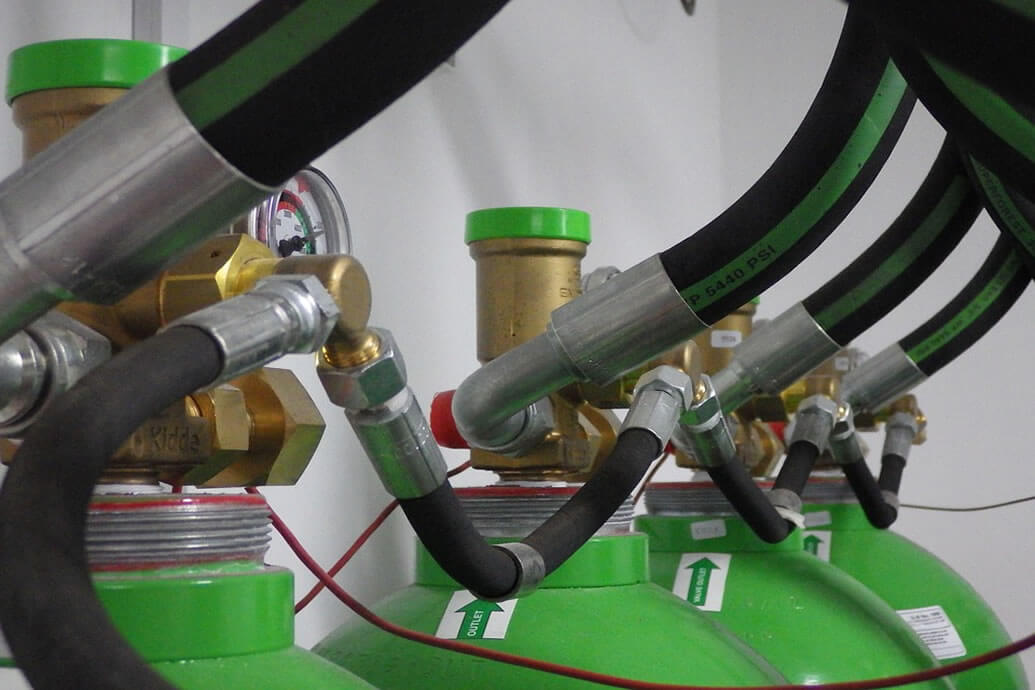 Nowadays the use of water-based fire suppression systems in tunnels has attracted much attention and the regulations and standards are also changing with regard to its use [1]. At present it is clear that by equipping a tunnel with a deluge water-based fire suppression system of enough capacity, e.g. greater than 10 mm/min for a water spray system, the design fire can be reduced to a lower level [2]. It is, however, not clear how the combustion products are released in such cases. As the fire is suppressed due to the intervention of the water sprays, strong interaction between the combustion and water sprays exist. This results in changes in the production of combustion products, which in turn changes the environment in the tunnel. Therefore this issue is very important for analysis of evacuation in a tunnel fire after activation of a suppression system.

Fire tests with and without a low-pressure fire suppression system were carried out to investigate the effect of fire suppression on production of key combustion products. The key parameters accounted for in the tests include fuel type, ventilation velocity, suppression and activation time.

Pre-tests were carried out in a fire laboratory under a large industrial calorimeter measuring heat release rates and gas flows. This was followed by tests carried out in a 15 m long, 2.8 m wide and 1.4 m high model scale tunnel with a scaling ratio of 1:4, see Figure 1.

Figure 1: A photo of wood pallet fire in the tunnel right after activation of the fire suppression system. (Photo: Ying Zhen Li)

The CO yields in the free burn tests tend to decrease slightly with the ventilation velocity and the time. In tests with fire suppression, the CO yields generally increase with the decreasing heat release rates. Significant increases (3.5 to 4.5 times) in CO yield are found in tests with later activation when the fire is close to the extinguishment (low heat release rates), especially for wood pallet fires, see Figure 2. However in most tests with suppression, the contribution of the high CO yield (Figure 2) to the CO production rate (Figure 3) is limited as the corresponding heat release rates are at a low level. Given that the maximum CO concentration at mid tunnel height in the free burn test is still the highest for all the fuels and velocities tested, see for example Figure 4, the free burn tests could still represent the worst scenarios from the point of view of CO concentration and evacuation. It is also found that early activation reduces the CO concentration significantly.

The soot yields in the free burn test tend to decrease with the ventilation velocity and increase with time. After activation when the heat release rate is lower than a certain value, e.g. 150 kW – 200 kW, the soot yields increase significantly with time. This period is very short and also corresponds to very small heat release rates. Therefore the contribution to the smoke production rate is limited even if the soot yield is high. In all the tests the maximum soot production rate in the free-burn test is the highest. During the whole period, it can be concluded that the free-burn test can be considered as the worst case in terms of visibility.

The visibility in the free burn tests for all the fuels is generally the lowest compared to fire suppression tests due to the fact that the heat release rate decreased immediately after activation of the fire suppression system.

Based on the test data and the above analysis, it can be concluded that for the fires tested, low-pressure fire suppression does not cause significant adverse effect in case that the fire can be effectively suppressed after activation, that is, the fire size has been reduced to less than 40 % of that in the free-burn test. To achieve this goal, early activation and high water density is required. In case that the fire is not effectively suppressed, e.g. when the water density is too low or activation is too late, the CO concentration and visibility could be worse than in the free-burn test.

Therefore, from the point of view of production of combustion products, only fire suppression systems with sufficient capability and early activation are recommended to be used in tunnels.#

This article was written be SP and published in Brandposten.