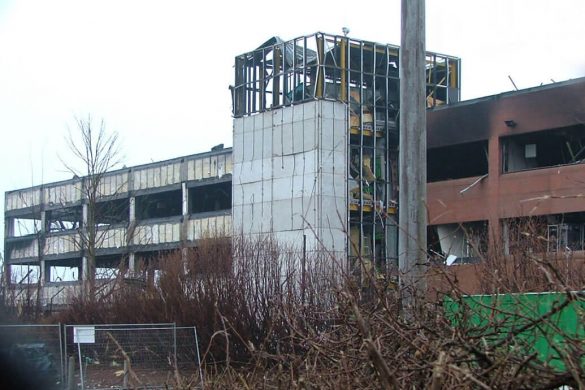 Buildings, parking garages, bridges and concrete‑lined tunnels are examples of structures that can be damaged by fire.  Although, in many cases, concrete can withstand the effects of fire and retain much of its load-bearing capacity, exposure for a long time, or to too intensive fires, can seriously damage the concrete.  Being able accurately to assess the condition of concrete after a fire is important not only for safety reasons but also for economic reasons.  Depending on the results of such assessment, a decision can be made as to whether the structure should be repaired or demolished.

Listen to whether the concrete is damaged

When assessing the condition of damaged concrete, visible damage and the results of measurements are used to identify damage and assess its magnitude.  Visible damage can be such as cracks, spalled areas, deformation etc.  Figure 1 shows a parking garage, in which the concrete surface above the burnt‑out cars has spalled.  There are several ‘simple’ instruments that an inspector can use to assess the condition of the concrete.  Tapping the concrete with an ordinary hammer, and listening to the sound, is a way of discovering damaged areas.  Concrete becomes more porous when heated, giving a duller sound to the tap than does undamaged concrete.  If the material has delaminated, the sound has a more booming character.

When exposed to fire for a longer period, the reinforcement bars in the structure can be heated up and cause deformation, as the reinforcement is deformed more easily at higher temperatures.  When assessing the condition, it is therefore important to measure deformation of elements such as beams and pillars.  Residual deformation cannot be repaired.  Pre-stressed reinforcement is more sensitive to heating than ordinary non‑stressed reinforcement.  Figure 2 shows a factory in Borås destroyed by fire.  The fire burnt for a long time, with the result that the pre-stressed T‑section beams were severely damaged.

Ultrasound can measure the depth of damage

Visual inspection and hammer tapping are effective methods of identifying damaged parts of a structure.  When more information is needed about the damage, it can be provided by ultrasonic measurements and microscopic analysis.  The velocity of sound through concrete depends mainly on the material’s density and stiffness.  When exposed to heat, concrete is degraded and its stiffness falls.  Heat also causes the concrete to crack, which further degrades its stiffness.  Measuring the velocity of ultrasound through drilled cores parallel to the surface on different depths provides means of estimating the depth of the damage.  The presence of cracks, and changes in the material that can be seen under a microscope, also indicate the temperature to which the concrete has been exposed at different depths, as shown in Figure 3.  The maximum temperature to which reinforcement has been exposed is of particular interest.

Examination of the motorway bridge that was damaged by a tanker fire in the autumn of 2005 employed microscopic analysis and temperature calculations in order to decide what repairs were needed (BrandPosten no. 34, 2006).  The investigation showed that the prestressed reinforcement had not been exposed to high temperatures, and also the depth to which the concrete was damaged.  The damaged layer was chipped away and replaced by new concrete.

Concrete is a thermally slow material, resulting in high temperatures at the surface, with the temperature falling off rapidly further into the concrete.  However, when exposed to fire for a longer period, large parts of the concrete will be heated up.  The uneven temperature distribution in the concrete during a fire results in changes in mechanical properties at different depths into the concrete.  Traditional single‑axis compression tests can be used to determine the compressive strength and modulus of elasticity of undamaged concrete.  However, if a test core from a fire‑damaged concrete structure is tested in the same way, the results will be misleading as the weak zones closest to the area affected by the fire will be compressed more than the less affected zones further into the concrete.  In addition, such testing will not provide any information on the depth of the damage.

Using a non‑contact (optical) measurement system, which continuously measures the change in shape of a test core when exposed to a compressive load, enables the mechanical properties of the concrete to be determined at different depths.  Together with SP Building and Mechanics and CBI Betonginstitutet, SP Fire Technology has evaluated this new method of testing in a research project.  The elastic modulus of concrete falls almost linearly from room temperature up to about 800 °C.  Figure 4 shows the test arrangement used in the project.  The two high‑resolution cameras record the deformation of the test core by tracking changes in the pictures, while the compression testing machine records the load level.  The tests that have been performed clearly show how the mechanical properties vary along the section through the concrete.  The inner zones of the cores can often be used as references to estimate the reduction in mechanical properties of the areas affected by fire.  If the fire has not affected the entire structure, reference cores can be taken from undamaged parts.  Based on these results, the designer is in a good position to determine the load‑carrying capacity of the parts of the structure damaged by fire.  Figure 5 shows test results from fire‑damaged concrete and from undamaged concrete of the same type.  It can be seen that, at a depth of about 90 mm in from the damaged area, the concrete is largely unaffected by the fire.

The project also included an overview of common methods for assessing the condition of fire‑damaged concrete.  The results from the tests using the optical measurement system were compared with traditional methods of evaluating the condition of fire‑damaged concrete.  The project is described in SP Report 2011:19, which can be downloaded from SP Fire’s website.  The project was financed by the Swedish Fire Research Board.