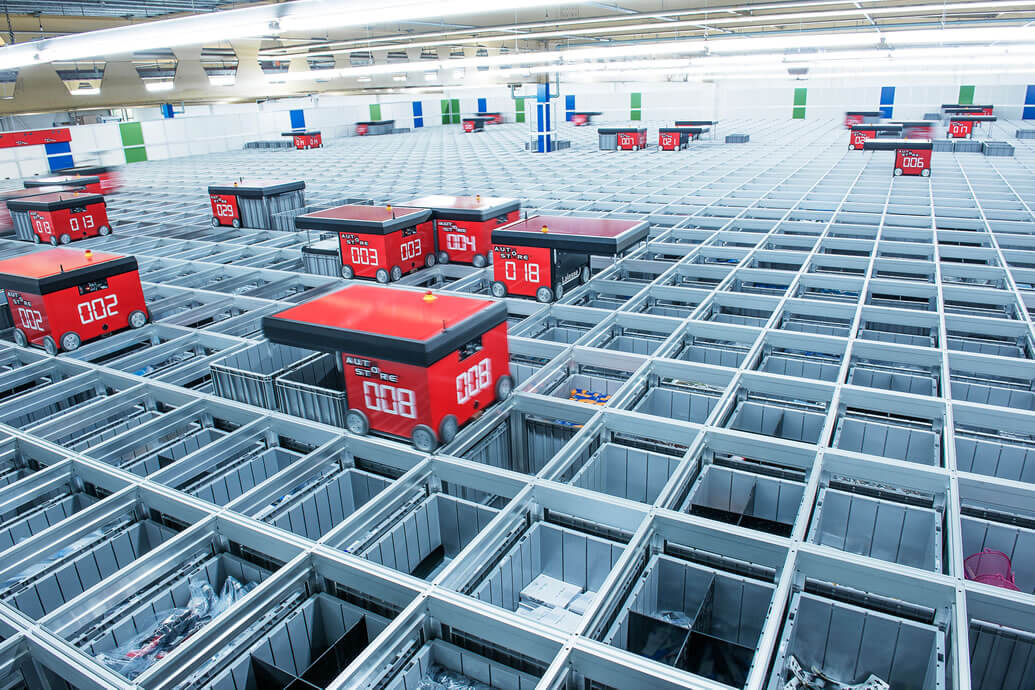 Four large-scale fire tests have been conducted with the AutoStore compact storage system. The objective of the tests was to establish an efficient sprinkler protection concept. The tests were overall very successful, but the damage criterion was exceeded in one of the tests.

Several previous articles in BrandPosten have described the AutoStore compact storage system and the work by SP related to fire characteristics and fire protection measures. The long term objective has been to develop an adequate sprinkler protection concept. Recently, a series of four large scale sprinkler tests were conducted at Underwriters Laboratories, USA.

The probability for fire is low

People have not normally access to the storage area of the AutoStore system. The probability for unintentional or intentional ignition caused by humans is therefore restricted. The robots at the top of the grid remain a possible fire risk. However, the design of the robots fulfills the requirements of the electrical safety standard IEC 60950-1 and the probability for fire in a robot is expected to be low. This standard covers the flammability of the materials used, fault testing and temperature measurements during both normal and at abnormal/fault operation. Additionally, the storage of flammable liquids is not allowed and storage of commodity containing large amount of expanded plastic material is not likely. Fire tests have also proven that a fire starting inside a bin will self-extinguish due to oxygen depletion.

• The storage is very compact with narrow flue spaces. Air movement through the array is therefore restricted and a slow fire growth rate is anticipated. This was proven during free burn fire tests; refer to BrandPosten no. 42, 2010.
• The flue spaces are always regular.
• The storage array is very stable. Collapse or leaning of stacks across flue spaces is not likely to occur during initial fire development.
• The vertical aluminum supports limits the possibilities for horizontal fire spread.

The possible disadvantages include:

A reliable and efficient sprinkler protection concept to be developed

The objective of the tests was to develop and efficient sprinkler protection concept able to suppress a fire at an early stage and limit fire spread and the total damage. This is achieved by and determined through a reduced number of activated sprinklers. The protection of the ceiling structure of the building holding the storage is also considered essential. Finally, the damage to the array of bins should be well within the array used in the tests. Prior to the tests, it was therefore decided that the following acceptance criteria should be met:

• The number of operating sprinklers should not exceed 10.
• The temperatures of a steel beam positioned at the ceiling above the point of fire ignition shall not exceed 540°C for more than one minute.
•Ignition on the inner faces of the stacks of bins surrounding the center 5 by 6 cells was not allowed.

It could be noted that the ceiling steel temperature requirements are identical with the requirements used in large-scale fire testing of storage sprinklers under UL 199, “Standard for Safety of Automatic Sprinklers for Fire Protection Service”. These measurements are done with a steel beam equipped with thermocouples.

The tests were conducted in the large scale fire test hall at UL in Northbrook, IL, USA. The test hall at UL is specifically designed for large scale sprinkler tests and measures 40 m by 40 m with an overall height of 18 m. The test hall is equipped with a moveable sprinkler ceiling measuring 30.5 m by 30.5 m. A total of 100 upright, ordinary temperature (68°C) rated quick-response, K160 (K11.2) sprinklers were installed at the standard spacing of 3.05 m by 3.05 m.

The grid and the fire ignition source

The grid had 7 by 10 cells which equals a footprint of 4.9 m by 4.8 m. Each cell contained 16 bins made from high density polyeten, HDPE and the overall height was 5.28 m. The total number of bins was accordingly 1120 pcs. Each bin was loaded with three small sized Group A Standard Plastic commodity cartons. Each carton contained 12 polystyrene cups.

The ignition source consists of a cube made from pieces of low density fibre board. The cube was soaked with heptane and wrapped in a polyethylene plastic foil bag prior to a test. The igniter was positioned at floor level, at the centre point of the grid, between two stacks of plastic bins facing each other.

In total, four fire tests were conducted, where the fill rate of the cells of the grid, the point of ignition relative to the sprinklers at the ceiling, the discharge density and the ceiling height was varied, refer to Table 1.

A 30 minute test duration time was applied after the activation of the first sprinkler. Directly thereafter, the sprinkler system was shut off and manual firefighting was undertaken.

The fire test results are summarized in Table 2.

The fire was clearly suppressed in Test 1, as visually observed and by the fact that only three sprinklers activated. The fire was not completely extinguished but the discharge density was sufficiently high and sufficiently uniform to limit horizontal fire spread. The overall fire damages were small and did probably to a large extent occur prior the activation of the sprinklers.
The fire was controlled in Test 2, as determined visually and by the fact that only one sprinkler activated. Due to the pipe shadow effect of the sprinkler branch line, the discharge density over the fire area was non uniform. This allowed a slow horizontal fire spreading and the fire damages were larger than in Test 1. Although the criteria based on the maximum allowed number of sprinklers and the steel temperatures at the ceiling were well below stipulated criteria, the damage criterion was exceeded. It could, however, be concluded that the fire had not re growth potential for multiple sprinkler activations during the 30 minute test duration time. Figure 2 shows the fire size at the activation of the first (and only) sprinkler.

From Tests 1 and 2 it appears that the fire growth rate is slow and fairly repeatable with a completely filled grid. The slow fire growth rate was also experienced in the free burn fire tests at SP. Based on the increased fire damages of Test 2, the decision was made to reduce the ceiling height from 10.7 m to 8.3 m and increase the discharge density of the sprinklers from 24.5 mm/min to 30 mm/min for Tests 3 and 4. It was also concluded that the scenario where the point of fire ignition was directly under one sprinkler seemed more challenging for the sprinkler system than having the point of ignition of the fire between four sprinklers. The remaining two tests were therefore conducted with this point of ignition relative to the ceiling sprinklers. For Test 3, the cell directly under the sprinkler was only filled with four bins. The adjacent cell was filled with 12 bins. The intent was to reduce the compactness of the grid, thereby allowing enhanced access of air to the seat of the fire and potentially increase its severity.

For Test 3, the fire growth rate was indeed faster and activation of sprinklers occurred earlier. A total of four sprinklers activated. Although the fire was not immediately suppressed fire damages were limited.

For Test 4, the grid was completely filled with bins. Once again, the fire growth rate was experienced to be slow. The fire was immediately suppressed and the recorded fire damages and steel beam temperatures were the smallest recorded over the entire series of tests. It can be observed that the steel beam temperature was considerably lower during this test as compared to Test 3.

For the first two tests, firefighting after the completion of the tests was undertaken by the activation of a separate water deluge system over the array combined by crew with handheld water nozzles working from scissor lifts. For the two later tests, the water deluge system was not used and crew used a traditional fog nozzle with foam injection to create non-aspirated, low expansion foam. This approached turned out to be more effective and the fire was secured relatively shortly.

Overall, test results were considered very successful. The tests confirmed the slow fire growth noticed in previous tests at SP due to the compactness of the storage. The number of activated sprinklers and the steel beam temperatures at the ceiling (see Figure 3) were well below what was determined as the maximum allowed.  It is also important to notice that no pool fire formation of melted plastics was noticed during the tests which commonly are the most challenging scenario for fires involving plastic commodities.

However, the damage criterion was exceeded in Test 2. The primary reason was that only one sprinkler activated and due to the pipe shadow effect of the sprinkler branch line. The discharge density over the fire area was therefore too low and non uniform. Although the fire was under control it was able to slowly spread horizontally.

Based on the test results, a sprinkler protection concept, including means for manual firefighting, will be formulated.

AutoStore is a new concept for the rational storage and handling of smaller items or products. The system has been developed by the Norwegian company, Jakob Hatteland Logistics AS. Benefits of the system include better use of available warehouse floor area and storage volume as well as practical and effective automation of goods and item handling.

The system consists of an aluminum grid organized in rectangular cells. Each cell has room for several bins that are stored on top of each other. The bin is currently available in two different heights and can be produced in different plastic materials in order to achieve particular properties, for example anti-static bins for the electronics industry. Standard inner measurements are 600 mm by 400 mm, with heights of 210 mm or 310 mm. There are tracks for the battery-powered robots on top of the grid. The robots hoist the bins to and from their storage positions and to and from work stations positioned around the periphery of the store. The outside of the store consists of a cladding of non-combustible sheet materials. Storage height is about 5.3 m, with a total installation height of about 6.5 m, including the surrounding walls. Currently, the largest sized grid contains 70 000 bins but there are plans to build a grid that contains 100 000 bins.