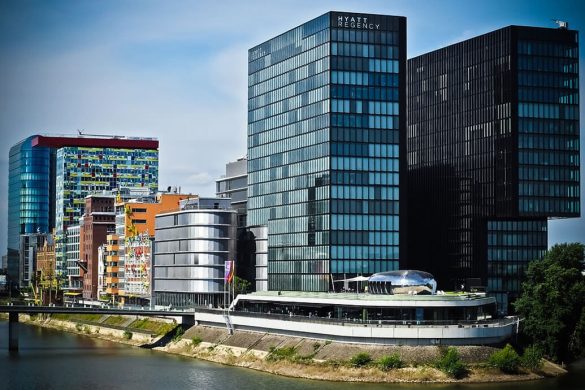 The reliable and safe evacuation of large buildings and complexes has always been a big challenge: how do you get every occupant safely out of the building in time, without risking injury to the evacuees? These articles examine building evacuation in detail, including proposing changes to building design elements and modelling evacuee behaviour in order to better understand how to safely evacuate everyone from a building.

With the development of modern cities, numerous buildings over 40-storey have been constructed in recent decades. Fire safety issues, especially evacuation, are of the major concerns for building designers, occupants, as well as governments. To ensure the safety of ultra high-rise building evacuation, different performance-based designs have been proposed. In this study, we propose a quantitative and viable elevator aided ultra-high rise building evacuation model which simulates both pedestrian movement and elevator transportation. After validation and calibration, the proposed Ultra high-rise building Evacuation with Elevators (UEE) model is adopted to explore two main evacuation strategies, i.e., phased evacuation and total evacuation with the aid of elevators. In these two strategies, refuge floor plays an important part because it not only provides a place for temporarily stopping, but also for the transition from stair evacuation into elevator evacuation. Thus, the effect of refuge floor interval on the high-rise building evacuation process is further investigated. It is found that the interval design of refuge floors has a direct relation with the characteristics of the elevators and building occupants. In the case that a proper ratio of the building occupants is transported to the ground level by fast elevators while others are evacuated by stairs, the evacuation process can reach an optimised state. Full article

Safe evacuation is the most fundamental requirement of fire safety measures in buildings. Traditional building evacuation design is governed by prescriptive building codes which neither have a clear statement of design objectives, nor proper consideration of the interactions between different components of the evacuation system. With rapid developments in performance-based fire engineering, computer evacuation models have been widely used by fire engineers and government officials in fire safety design of buildings. Two approaches are usually used to represent the buildings in evacuation models: fine and coarse networks [Gwynne et al., A review of the methodologies used in the computer simulation of evacuation from the built environment, Building and Environment 34 (1999) 741–749]. For large and complex buildings, such as high-rise or assembly buildings, owing to their spatio-temporal complexity, neither of the 2 network approaches in isolation is satisfactory. The fine network model requires extensive computational power while the coarse network model may not be adequate in representing details of the evacuation process. This paper presents an approach that integrates both network approaches for efficient and detailed assessment of evacuation in large and complex buildings. To demonstrate the advantages of using the integrated approach, this paper presents the results of evacuation simulation for 2 representative buildings. It has been found that the fine network approach (FNA) is inadequate to simulate evacuation of large complex buildings on a normal PC in terms of computational resources. In contrast, the integrated approach can not only perform evacuation analysis for the whole building but is also able to give detailed movement pattern in places of interest without consuming a large amount of CPU time, which makes it possible to directly identify the potential “bottlenecks” in the building. Full article

A probabilistic approach for the analysis of evacuation movement data

This paper presents a probabilistic approach to analyse evacuation movement data. The approach relies on a detailed video analysis of people movement and pattern reconstruction. Conditional probabilities for travel path trajectories, walking speeds, and physical area occupied on stair landings are calculated for the evacuee population. The approach has been applied as a case study using data from an evacuation drill performed in a six-storey office building in the United States. The evacuation drill was filmed and occupant’s behaviours on stairs were analysed using the new method. A comparison with the deterministic methods currently employed in engineering practice has been performed. The benefits of the probabilistic approach are discussed, including (1) a more accurate representation of people movement and (2) the use of probabilistic data for modelling purposes, i.e., model validation and model development. Full article