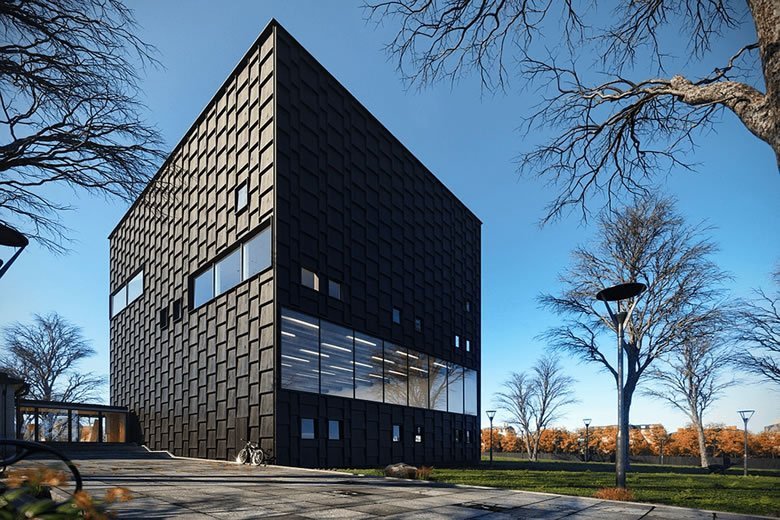 Building Facade and Fire, the building facade is an important part of the building as it provides a significant proportion of the building’s thermal insulation and is also the outward face of the building. We have recently read both national and international reports of several fires involving the facades of buildings, with the result that there has been a lively debate on the use of flammable insulation in exterior walls.  This raises the question of what our regulations have to say, and whether they can be interpreted in different ways.  However, one thing that we can say for certain is that this is an area in which more research is required, and that international cooperation is essential if we are to ensure the design and construction of robust fire resistant facades.

That facade present a challenge in terms of fire protection is well known, particularly now with growing demands for the use of flammable materials not only on the surface of façades but also within the structure of exterior walls.  If, for example, we build a timber building, we want to show this on the outside, i.e. to use visible timber in the façade.  Flammable insulation, such as EPS, can be used to provide a simple and cost effective solution that meets the energy targets.  At the same time, however, the applicable requirements for fire protection must be fulfilled, making it important to handle the material in the light of its potential fire risks.

The 19th edition of the Swedish Building Regulations, BBR 19, specifies the following requirements for exterior walls in Class Br 1 buildings:

We can ask how we are to verify fulfilment of these requirements.  The general guidelines in the Building Regulations give details of certain parts, but they are unclear in some respects and can be interpreted differently.

Item 1 above is unclear.  According to the guidelines, this requirement is fulfilled if the exterior wall has a separating capability, but it is not clear as to what capability is reasonable.  Some can interpret it as being the same as that of the floor/ceiling structure, i.e. EI 60.  This is the cautious interpretation, but the question is whether it is reasonable.  Windows are excepted from the requirements if the distance is at least 1.2 m, but if so other parts must also fulfil the requirements of EI 60, which is not the practice today.

In addition, the guidelines in BBR 19 state that an exterior wall design that meets the fire test requirements of SP Fire 105 fulfils the requirements of Item 1, which is not correct.  SP Fire 105 can be used to assess the risk of the spread of fire along the surface of a façade and within the structure of the wall itself, and can also to some extent be used to assess the risk of falling materials.  The fact that SP Fire 105 does not test fulfilment of Item 1 will be corrected by the Board when the Building Regulations are revised in 2013, but the uncertainty concerning the level of separating function between fire cells remains.

According to the guidelines in BBR 19, spread of fire within the wall and along the surface of the façade up to a height of two storeys above the burning room is accepted when testing in accordance with SP Fire 105.  This means that the test accepts a burning interior of walls that are also intended to provide separation between fire cells.  From this, there is naturally a risk that the fire can spread through a neighbouring fire cell, even though the wall itself meets the separating requirement when it is based on the total fire resistance of the entire section of the wall.

Item 4 above is also unclear.  The guidelines text first states “… that the risk of falling parts of the building, such as shards of glass, small pieces of plaster etc. is limited”.  If we then read on, and see what the requirements are after testing in accordance with SP 105, the guidelines text says “… no large parts of the façade fall down, e.g. large pieces of plaster, sheets or panes of glass …”.  So what is it that is meant:  shards of glass or large sheets of glass, small bits of plaster or large pieces of plaster?  All this results naturally in varying interpretations of the requirements.

As described above, the fire resistance of façades in Sweden is now tested in accordance with SP Fire 105.  This is a national Swedish test method, but the results can also be used in Denmark, Norway and (to some extent) Finland in order to show whether the structure meets the requirements in the respective countries’ Building Regulations.  However, the Nordic countries have different limitations concerning applicability of the test, e.g. relating to the number of storeys.  The test is intended to represent a fire scenario of a fire in an apartment, of which the window has failed, with the result that a larger mass of flame surges out.  The test can also represent a burning rubbish container on the ground beside a façade.  SP Fire 105 tests façades on full scale.  The size of the test façade is 4 m wide x 6 m high, and must represent the actual façade system as closely as possible.  The length of fire exposure is about 20 minutes, and the fire must not spread along or within the façade too far from the source of ignition during the test.  Any falling pieces or droplets are noted and assessed.  The temperatures of the fire gases above the panel are measured, as is the heat flux towards the panel.  The aim of these measurements is to decide whether the façade system itself contributes too much to the progress of the fire.

A European development project for facades and their fire protection is at present in progress.  The work is being carried out jointly by a number of parties within EOTA, with the aim of developing a method of evaluating the fire resistance of facade systems so that it can be included in a European Technical Approval for facades.  The work is aimed at developing a common European method for testing and classification of the fire resistance properties of building facades.  SP is participating actively in the work with the aim of developing a method for full scale testing and ensuring that the method addresses the most relevant fire resistance properties, in the same spirit as SP Fire 105.  Another objective of our work is that the method should include methods of measurement and clear requirement levels for factors such as the spread of fire and falling materials.  It is important to avoid arbitrary assessments of test results.  It is very unclear as to when the European test method will be published.  With the introduction of CPR on 1st July 2013, both EOTA and the ETA system will cease to operate, but the work will probably not be completed by then.  If so, SP will press for the work to be taken up and concluded by some other organisation.  ISO TC 92 has developed a large scale method for testing facades:  it is possible that this method, suitably modified, could be a candidate.  It is most important to ensure that fire protection of facades is treated realistically.

Research into Building Facade and Fire

Research is being carried out by SP Fire Technology in order to obtain a better understanding of the fire dynamics and effects on building facade materials of a fire when tested in the SP Fire 105 rig.  Additional measurements have been made in a number of tests, giving us a detailed picture of the progress of the fire and assisting the description of comparisons using models.

Using FDS (Fire Dynamics Simulator) we have simulated our facade test rig using computational fluid dynamics.  Using our numerical model, we can represent the large scale effects on the building  facade with close agreement to the results of experiments.  In future, this will permit us to make certain forecasts of how the effect of fire changes when conditions are changed.

Some of the latest research results were presented at a conference in Fire Computer Modelling in October in Santander in Spain.

The fire safety of building facades is of international interest.  As a result of increasing environmental requirements and stricter rules for energy efficiency, the use of new, flammable building facade materials (often as additional insulating materials) will increase.  It is therefore very important that fire protection of facades should be properly treated in response to the coming large scale changes, which present new risks to facades.