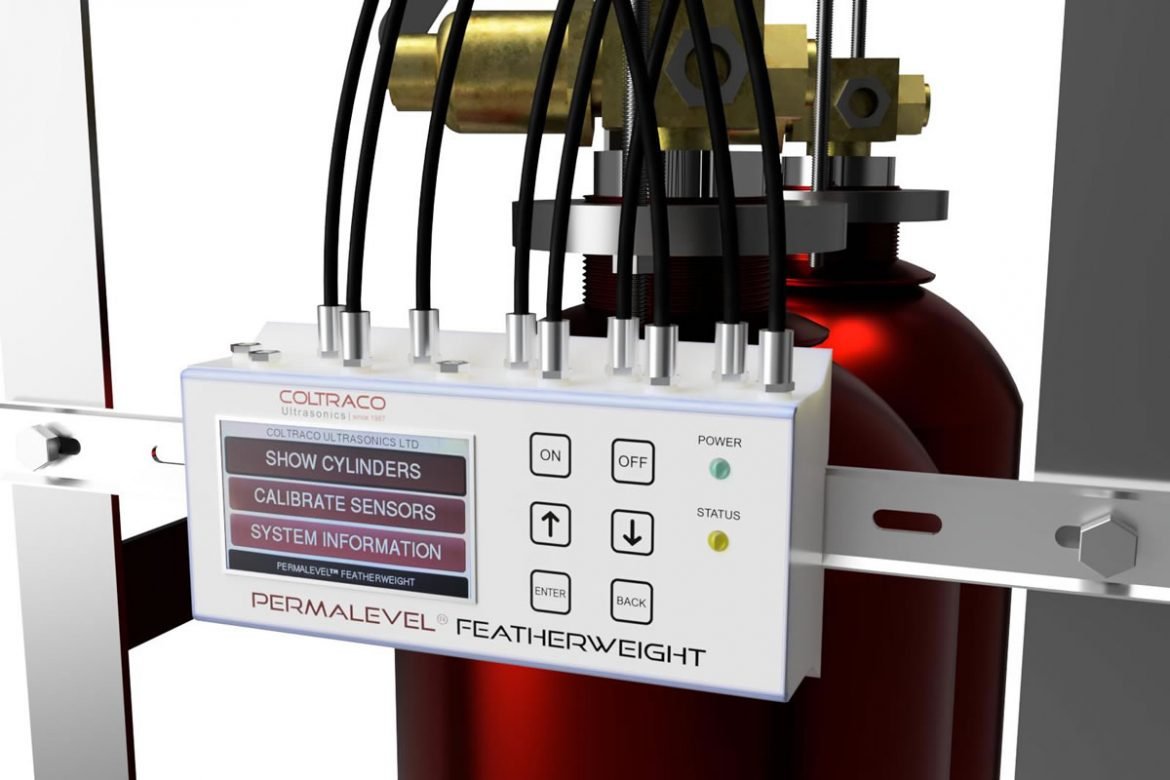 Coltraco Ultrasonics have designed Permalevel™ Featherweight, a constant monitoring system for CO2, Inert Gases and the combined weights of Clean Agents and Nitrogen, all in one lightweight system. In this article the author considers its application on Inert Gas systems.

Non-liquefied, pressurised inert gas systems currently rely on pressure gauges to determine their contents, as it is known that the pressure (adjusted for temperature) of a gas is directly related to the quantity of the gas. In fact, the ISO regulations for non-liquefied gases are as follows:

9.2.1.3 The storage container contents shall be checked at least every six months as follows:

Permalevel™ Featherweight directly relates a change in pressure of a cylinder at a known temperature to a change in its mass. The well-known ‘ideal gas’ equation predicts a 1:1 relationship between fractional changes in pressure and mass. The truth is that there is an intrinsic relationship between the two, however, it is more complicated than this and depends on the specific contents of the cylinder. At Coltraco, we are able to account for this in specific cylinders and inert gas agents, allowing us to accurately and reliably convert a change in mass to a change in pressure.

Mass, like pressure, is a direct measure of the quantity of a fixed volume of gas and, in fact, is a superior metric as it cannot be affected by external factors, like temperature; a cylinder system’s mass will only decrease if there is a loss of the agent from the cylinder.

On top of this, there are a number of other advantages to using the PML® Featherweight to monitor a cylinder’s contents by their mass compared with measuring their pressure.

Accuracy: The PML® FW can detect a change in mass of <1% in high pressure Inergen systems. Pressure gauges are not only unreliable, they are limited in their accuracy as they use an analogue scale. Pictured is a typical pressure gauge that would be used on a high-pressure inert gas cylinder. For a 20MPa (200 bar) cylinder, the accuracy of this gauge is limited to 2.5% of the fill pressure. This is compounded by the potential for human error in reading any analogue scale; two people reading the same analogue scale could report slightly different values. In contrast, a digital scale will give the numerical value as accurately & precisely as it is capable of doing.

This accuracy can be achieved for all high-pressure Inergen/inert gas systems. Inergen is one of the most common inert gas fire extinguishing agents, and itself comes in 3 common blends, IG541, IG-55 and IG-01. The vast majority of Inergen systems use one of eight types of cylinder. <1% accuracy can be achieved for all of these blends in any of the common cylinders, (in many cases, even <0.5%).

If a fast leak forms, far more than a 5% decrease in pressure could occur between measurements. The ISO regulations shown above only require pressure to be tested once every six months. A fast leak, or indeed a slower leak occurring shortly after a check, could lead to an incredibly unsafe environment, where any fire would almost certainly fail to be extinguished. This could potentially go unaddressed for months.

Constant, automated monitoring. The PML® FW addresses this issue, as once a cylinder is mounted, it is continuously monitored. If the agent mass drops by more than 1%, the cylinder is marked as ‘LEAKING’. If mass loss exceeds 5%, the system will initiate an alarm and note a ‘CRITICAL LEAK’ on the cylinder.

How do we achieve this accuracy?

The PML® FW is fundamentally simple: the cylinder is threaded onto a high-precision load cell, which, once calibrated, will return the weight of the cylinder, accurate to approximately ±100g. Therefore, any cylinder with an agent mass greater than 10kg can be measured with precision greater than 1%. However, simply monitoring the weight of a cylinder is not sufficient to deduce fractional changes in the agent mass.

The output of the load cell is the total mass of the cylinder and its contents. To determine percentage change in agent mass, therefore, we have developed unique algorithms to allow us to accurately and reliably calculate the initial mass of the agent based off the cylinder volume, its fill pressure and temperature and molecular makeup of the agent.

The most common method to determine the mass of a pressurised gas is to use the well-known ‘ideal gas’ equation, which is an approximation that ignores some physical properties of the gas molecules.

At Coltraco, however, we believe that this equation does not deliver sufficient accuracy, so we use more complicated and more accurate equations, to develop the unit’s algorithms which takes into account the physical size of molecules and the interactive forces between them.

This allows us to calculate the initial agent mass to a high degree of accuracy, as well as converting changes in mass to changes in pressure at constant temperature.

Carl Stephen Patrick Hunter OBE is Chairman of Coltraco Ultrasonics, a high-exporting manufacturer of monitoring systems of gaseous extinguishing systems for the global fire sector. Their flagship instrument is Portalevel™ MAX and Portasteele™ Calculator which pioneered the ability of fire technicians to converts contents readings to ones of agent mass. For more information visit https://coltraco.com/