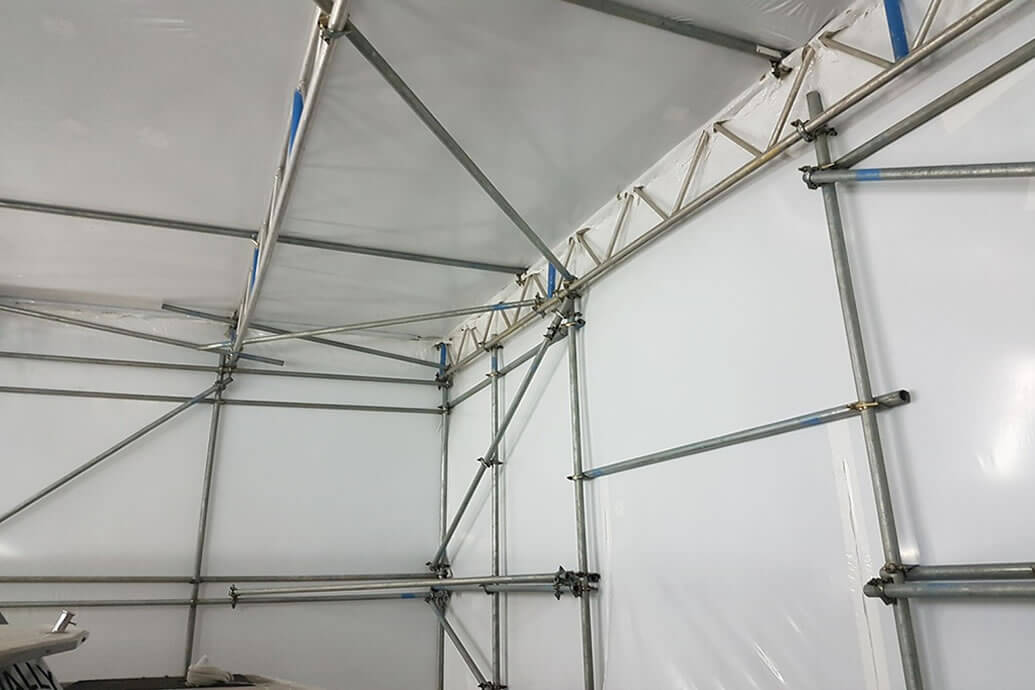 SP Fire Technology and Brandskyddslaget have now concluded a research project investigating the fire risk of textile membranes when used in temporary building structures.  The work has evaluated small-scale test methods and validated the results against large-scale tests.  The main result is a proposal for revised test methods and requirements ensuring closer harmonisation with those applicable to textile membranes in permanent buildings.

This project has investigated the existing fire protection requirements in Sweden for public tents and other large temporary textile structures.  The regulations for public tent buildings were under revision by MSB (the Swedish Civil Contingency Agency) at the time of the project.  A goal of the project was to ensure that the fire safety for textile membranes in large tents was maintained, and further to define requirements for the new applications.

The work in the project has focused on the requirements and reaction-to-fire behaviour of textile membranes.  The issues regarding fire resistance of the load carrying structure and evacuation from a textile building structure during a fire have not been addressed.

The Swedish fire safety regulations for public tent buildings are governed by the Public Order Act and are regulated by requirements and guidelines from MSB.  These rules are designed specifically for larger tents (> 150 persons) and the fire safety requirements are based on tests with a small flame (SIS 650082) or alternatively a large-scale test.

It has been seen that these regulations most often are applied properly for traditional public tents, where there are requirements on inspection and a type approved textile membranes. Regarding the new types of textile buildings, it seems that requirements from authorities have been unclear and have varied from case to case.  The reason for the unclear requirements is that authorities seem often to require “material difficult to ignite” instead of referring to a specific test or regulation.

With regard to fire safety requirements for textile membranes in weather protection applications, there appears to be no clear regulation.  In some cases, there are requirements from the local rescue service or from the builder for test approval according to EN 13501-1. In other cases, there are probably no fire requirements requested whatsoever.  It is clear that Arbetsmiljöverket (the Swedish Work Environment Authority), which is the responsible authority in this case, should provide clear requirements to raise the safety level.

The fire performance requirements generally referred to in Europe today, for textile membranes in permanent buildings, temporary buildings and weather protection, is EN 13501-1.  Requirements for particular Euroclass ratings for different applications vary from one country to another.  It can be noted that most of the Nordic countries have based their requirements on the Euroclass system.

Evaluation of methods for classification testing

Classification tests with typical textile membranes for some selected applications were conducted.  The products investigated included a range of PVC coated polyester fabrics (PVC/PES), textile membranes that are used for large tents and event building.  One of these PVC/PES products was for use as weather protection.  Additionally a polyethylene membrane for weather protection applications on scaffoldings was included in the test programme.

All products were tested with the current Swedish classification tests, SIS 650082, and EN ISO 11925 2, which is a small flame test required in EN 13501-1.  The conclusion from these tests was that EN ISO 11925 2 with 15 s edge application was equivalent, or harder to pass, compared to the present application of SIS 650082 for textile membranes.  This test procedure with EN ISO 11925 2 corresponds to Euroclass E.

A few of the PVC/PES membranes and the polyethylene membrane were selected for tests with EN 13823, the SBI-method.  This is a medium scale test method for determination of heat release rate, smoke production and flame spread.  This test method, together with 30 s flame application with EN ISO 11925 2, is required for Euroclasses superior to E.

The results of the EN 13823 tests showed that the mounting of the textile membrane is important for the outcome of the test.  A metal support for mounting the corner of the test specimen resulted in a more accurate test.  Generally, this mounting procedure results in a lower Euroclass but gives more repeatable results compared to the standard installation without a corner support.  Another observation was that EN ISO 11925 2 tests with 30 s flame application against the specimen surface give better correlation with EN 13823, compared to edge application of the flame.  It was thus found that that there is a need to formalise the test procedures better for applications with textile membranes for building applications.

The main results of the tests with the PVC/PES membranes were that they showed good fire properties with limited fire spread, and they were basically self-extinguishing when the fire spread away from the flames of the ignition source.  The problems found were smoke production and burning droplets.  It has previously been assumed that smoke will be ventilated out by a rapid formation of a hole in the membrane caused by the fire.  But the tests showed, however, that there will be no hole formed in the ceiling when the ceiling height is large compared to the size of the ignition source, and a hole in the corner of the building is not effective for venting out smoke.

Experiments with the polyethylene fabric showed self-sustaining fire spread and falling flaming droplets / particles.  The fire spread was less severe as it was rather slow, but the flaming droplets formed pool fires on the ground, which must be considered as a severe hazard.  Such pool fires may contribute to the spread of fire to adjacent materials and buildings.

The justification for the proposal is that this gives the requirements under the same classification standards that now apply to textile membranes in permanent buildings in Sweden and are applied in most other European countries.  The proposal also includes that a differentiation of the requirements depending on the type and use of the temporary building. The requirement is proposed to be higher (Euroclass C-s2, d0 ) when the building has more than one floor or where there is a raised platform or similar that is higher than half the maximum ceiling height of a single-storey building.  These higher requirements are proposed for reducing the risk from smoke in an evacuation situation.  For textile membranes used in weather protection applications is proposed a minimum requirement of Euroclass E (with edge ignition).

Article and report provided by SP Fire Technology and Brandskyddslaget.