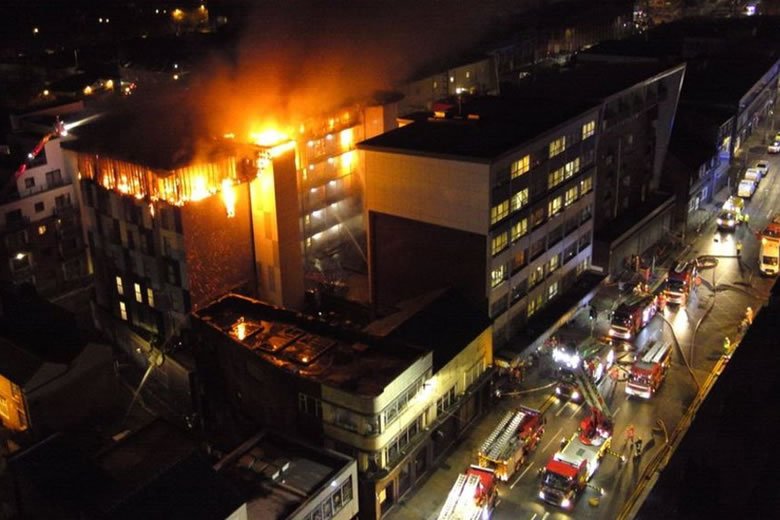 Students ignored a fire alarm in Bolton blaze at a block of student flats because fire alarms go off “almost every day.” Hundreds of University of Bolton students were evacuated when the fire broke out at private student halls, The Cube, in Bolton town centre.

Around 200 firefighters and 40 fire engines tackled the fire which broke out about 20:30 GMT before spreading quickly and was described by witnesses as “climbing up the cladding.”

Although not the same type as that used on the Grenfell Tower (ACM), the cladding used on the accommodation block (HPL) “causes concern”, Mayor of Greater Manchester Andy Burnham confirmed at a press conference in Bolton. One person was rescued by crews via an aerial platform, whilst two people were injured in the fire, amid confusion among residents because, as one said, fire alarms go off “almost every day.”

More than 100 people were successfully evacuated and all residents accounted for, but students say people initially ignored the fire alarms, resident Afnan Gohar told the BBC she thought it was a false alarm. “We didn’t take notice of it until a girl came running and screamed, telling us to get out and we didn’t believe it at first,” she said.

Indicative of alarm fatigue, special effects makeup student, Lauren Cobb told The Guardian: “I heard the alarm go off, however it goes off pretty much every day and everyone kind of got used to it. I assumed it would stop soon and it didn’t. “My flatmate was the one who actually started to bang on my door and told me this fire was real.”

Elise Millward, a fellow makeup special effects student, also initially dismissed the alarm because it goes off multiple times a day, but heard screams from peers and noticed smoke coming under the doors of her flat. False alarms allow for a laissez-faire attitude towards fire alarms, but they can be prevented, as recommended in BS 5839-1:2017 manual call points can be fitted with a protective cover preventing false alarms whether accidental or malicious, halting alarm fatigue.

Alarm fatigue occurs when a person becomes desensitised to an alarm, such as a fire alarm, due to repeated false alarms and therefore fails to react appropriately in an emergency situation – as evident with the residents of The Cube. Students also told the Manchester Evening News they heard but initially ignored the fire alarm, a student who was in his first-floor room told them: “The fire alarm was going off but nobody was paying attention.

“Then someone knocks on my door and it’s only a small fire at that stage. Everyone got out well before it was anything serious. To me it looked like the fire was climbing up the cladding. I’m here, I’m out and I’m alright. “But if it had gone up in the middle of the night everyone would have slept through the alarm. We have slept through them before when there were non-emergencies.” Fire chiefs confirmed the fire could have been disastrous if it had broken out in the early hours when residents would have been asleep.

Other students only fled the tower block fire when they saw a post on a Facebook group confirming the fire was real, admitting they “didn’t think anything of it because we have had that many.” Alarm fatigue can have a dangerous effect on a fire evacuation and failing to react appropriately in a real emergency can prove fatal, especially when every second counts – the blaze in Bolton is a stark reminder of that.

Whether accidental or malicious it is imperative to eradicate false fire alarms, eliminating the threat of alarm fatigue before it is allowed to manifest and present an additional barrier to fire safety, and ultimately survival.