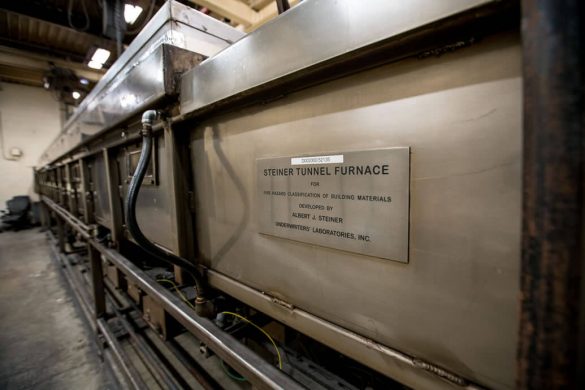 Towards the beginning of the 20th century, major fires in US buildings aroused public concern and demonstrated the need to address and regulate the burning characteristics of building materials. In the early 1940s, fires at the Boston Cocoanut Grove Nightclub, La Salle Street Hotel (Chicago), and Winecoff Hotel in Atlanta resulted in over 650 deaths. These three fires had a common theme – rapid flame progression along the surfaces of the interior finish greatly contributed to uncontrollable fire spread. There was a dire need to manage these types of building fires through passive fire protection and regulating material characteristics. By the 1940s, research work at UL (Underwriters Laboratories, Inc.) had led to this prevailing “reaction to fire” test method using a 25 foot long tunnel to characterize the surface burning fire and smoke characteristics of interior finish materials.

The 25-foot tunnel became known as the Steiner Tunnel, named in honor of the primary UL Engineer, Albert J. Steiner. Its prominence in the fire protection community was based on its ability to provide cost effective, repetitive testing and use of a sample size that could characterize interior finish materials used in actual installations. After a few refinements the first formal test method was published as Standard UL 723 by UL in 1950. The test method was formally adopted by American Society for Testing and Materials (now ASTM) in 1961. The National Fire Protection Association later adopted the method as NFPA No. 255 in 1955. Today this method is currently described in UL 723 and is also commonly known as ASTM E84.

The regulation of rapid progression of fire on interior finish materials is as relevant today as it was 70 years ago. A more recent example of the need for interior material fire assessment is the Rhode Island Station Nightclub fire of 2003. In this fire, rapid progression of flames of the interior materials, which were not examined to proper standards, led to the building being engulfed within minutes.

The tunnel apparatus is constructed such that materials under test have an exposed area of 18 inches wide by 24 feet long, up to a thickness of approximately 5-6 inches, maximum. The test is conducted with the sample mounted in the “ceiling” position of an enclosed tunnel furnace measuring 18 inches wide by 12 inches deep by 25 feet long. Two burner outlets, spaced eight inches apart, deliver a nominal 5000 BTU/min., 4½ foot flame to provide the ignition source to the underside of the mounted specimen. The test continues for a 10-minute duration. A controlled inlet draft of 240 feet per minute facilitates horizontal flame propagation throughout the test.

With all of the controls set for the tunnel operation, the room is darkened, and the gas burners are ignited. Observers record the distance and time of maximum flame front travel through the tunnel observation windows. Flame front advancement is recorded at the time of occurrence or at least every 30 seconds, if no advancement is noted. The test continues for a 10-min period. A light and photoelectric cell, mounted in the exhaust duct, records smoke obscuration during the test. Flame spread and smoke developed indices are reported in comparison with calibration materials of red oak lumber and inorganic reinforced cement board. Red oak propagates flames to the end of the tunnel in approximately five and a half minutes and generates a flame-spread index of approximately 90. A smoke developed index of 100 is assigned for red oak. Inorganic reinforced cement board generates flame spread and smoke developed indices of zero. UL 723 and ASTM E84 are found throughout US model codes and many jurisdictional requirements. Many US Codes require a Flame Spread of 25 or less, and a Smoke Developed of 50 or less for materials used within plenums. For materials used as interior finish, most US codes require the following Class ratings for various installations and based on occupancy types:

The Steiner Tunnel test method, as described in UL 723 and ASTM E84, is one of the most popular “reaction to fire” test methods within the US. This method has been used for decades with success to assess the comparative surface burning characteristics of building materials for several decades. The selection of materials with appropriate, code compliant results has proven to be a useful tool in mitigating the hazards associated with flame propagation on interior surfaces. UL continues to provide the latest fire research and testing capabilities to the building products industry. With unmatched experience and insight, we help develop many of the industry test standards that are referenced in building codes worldwide. To learn more about UL´s 120 years of fire safety testing, click here to access our educational series of fire safety articles drawing on UL´s history.