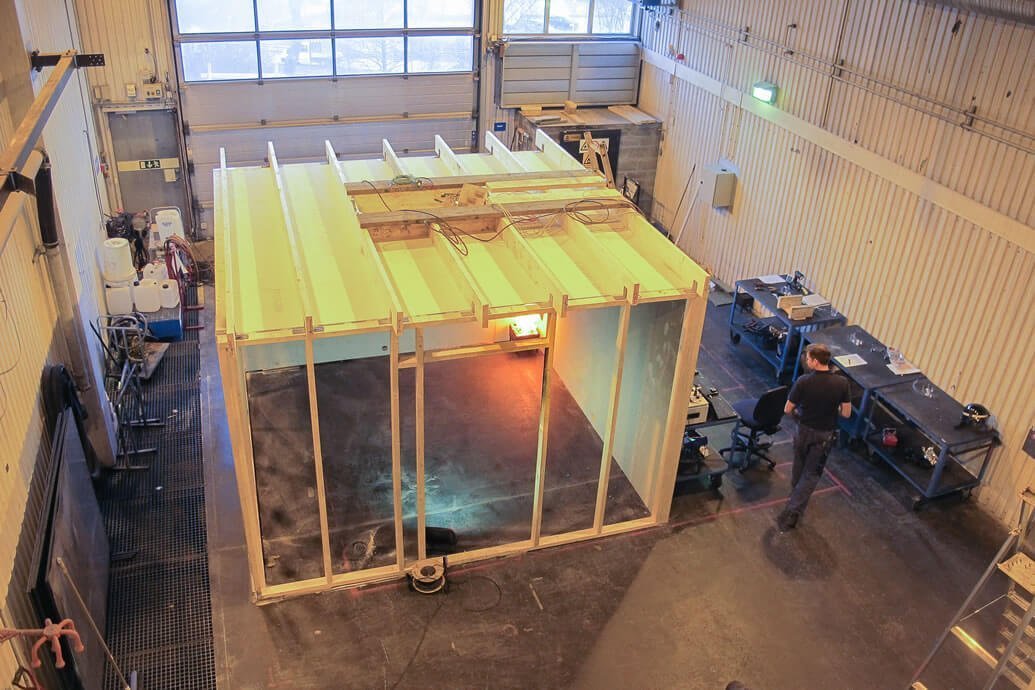 The response time of fire sprinklers is essential for their performance, especially in applications where life safety protection is desired. The earlier the sprinkler activates, the smaller the size of the fire. The aim of this study was to determine the response time – and the corresponding heat release rate – of different sprinkler glass bulbs in a residential room fire scenario.

A series of fire tests were conducted inside a square compartment measuring 3.66 m by 3.66 m (12 ft by 12 ft) having a ceiling height of 2.5 m. The compartment was either enclosed or had two walls removed to provide a fully ventilated scenario and to mimic a larger sized room. A propane gas burner was positioned at one of the corners of the compartment. The mass flow rate of the gas was controlled such that either ‘slow’, ‘medium’ or ‘fast’ fire growth rate scenarios were simulated. The compartment is shown in Figure 1.

In each test, nine Response Time Index (RTI) and operating temperature glass bulb combinations were tested. Each test was replicated three times and the response times of the glass bulbs were measured by the use of electrical micro switches. In addition to the sprinkler glass bulbs, two commercial multi criteria detectors were installed at the same radius from the compartment corner with the propane gas sand bed burner. If considerably faster than sprinkler glass bulbs, combined heat and smoke detectors may be a viable option for the detection of fire allowing the activation of deluge sprinklers or water mist nozzles within a room.

Another observation is that the nominal operating temperatures of the glass bulbs have a stronger effect on the results than does the RTI. This is true for all three fire growth rate scenarios. In other words, a reduction of the nominal operating temperature of a sprinkler glass bulb has a larger effect on the speed of response than a reduction of its thermal sensitivity. The result for the slow fire growth rate scenario is shown in Figure 2.

Test results for the fire detector

The fire detection threshold of the fire detectors was set at a fixed-temperature limit of 40°C. For the activation of a separate sprinkler system using heat detectors, a temperature limit this low need to be combined with additional fire detection criteria, such as the detection of smoke. However, this feature of the fire detectors was not tested as the propane gas burner generated little smoke. The heat sensors of the detectors typically detected the fire prior to the activation of the first sprinkler glass bulb for the slow fire growth rate scenario. However, for the medium and fast fire growth rate scenarios, some of the sprinkler glass bulbs activated prior to fire detection. This is specifically noticeable for the fast fire growth rate scenario. The explanation may be a change of the gas flow profile and velocity of the ceiling jet (at the centerpoint of the compartment) with an increase in the fire growth rate. This may make the position of the glass bulbs relative to the ceiling more exposed to the hot flowing gas as compared to the thermal sensors of the heat detectors. The fire detection times of the heat detectors were barely influenced whether the compartment was closed or open. This is in line with the observation that the sprinkler glass bulbs having a lower RTI was less influenced by the compartment conditions than the glass bulbs with a higher RTI.

Jürgen Teschner from Job GmbH provided the sprinkler glass bulbs, Bernhard Abels from Tyco Fire Protection Products the compression screws and disc springs and Jan Blomqvist from Siemens AB the fire detectors and associated equipment as well as provided help with the data recording. The technical input and support from these people is gratefully acknowledged. The tests were financed by the Swedish Civil Contingencies Agency (MSB) under the project “Analys av brandsäkerhetens fysiska bestämningsfaktorer och tekniska åtgärder som stöd till nollvisionen”.

Main Image: The mean heat release rates at the activation of the sprinkler glass bulbs for the ‘slow’ fire growth rate scenario.