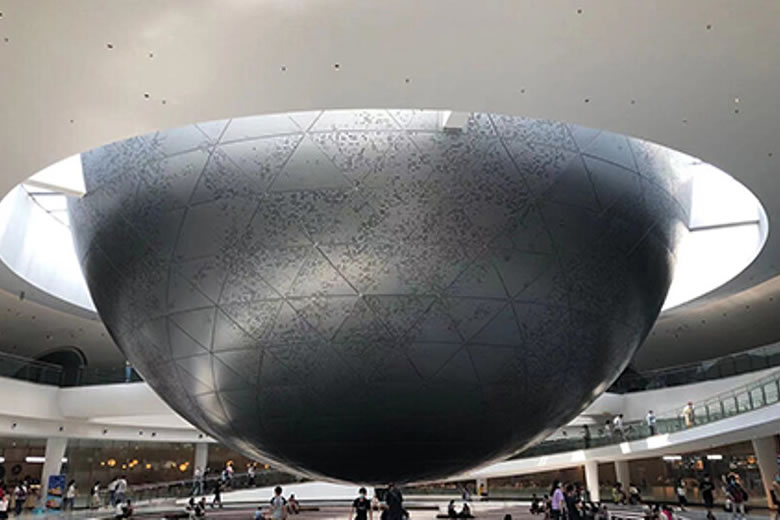 The Astronomy Museum in the Chinese metropolis of Shanghai is an architectural marvel. Built without any straight lines or right angles, it is inspired by astronomical principles.

However, when it comes to fire protection, the interior of the world’s largest astronomy museum uses tried-and-tested earthly products in the shape of aspirating smoke detectors from Securiton.

Emerging China is investing in spectacular buildings. The Astronomy Museum in Shanghai opened to the public in July 2021. Not only is it the largest museum of its kind in the world, designers Ennead Architects have ensured it is also arguably the most spectacular.

According to Ennead Architects, the design concept of the Shanghai Astronomy Museum is based on embodying in the architecture some of the fundamental laws of astrophysics that prevail in space.

The three-body problem of celestial mechanics is considered one of the most difficult mathematical challenges. It concerns the attempt to determine the course of three bodies under the influence of their mutual attraction. The building contains no straight lines or right angles; its volumes are spheres, curves and domes. And the three large volumes in the museum work rather like a gigantic sundial.

Large open volumes such as theatres, atriums and airport terminals pose a wide range of challenges in terms of fire protection. Point-type smoke detectors are often ineffective due to smoke dilution and stratification.

This is where Securiton’s reliable SecuriSmoke ASD aspirating smoke detectors come in: these early warning devices benefit from multiple alarm levels, enabling staggered responses according to the situation for the preservation of life and property.