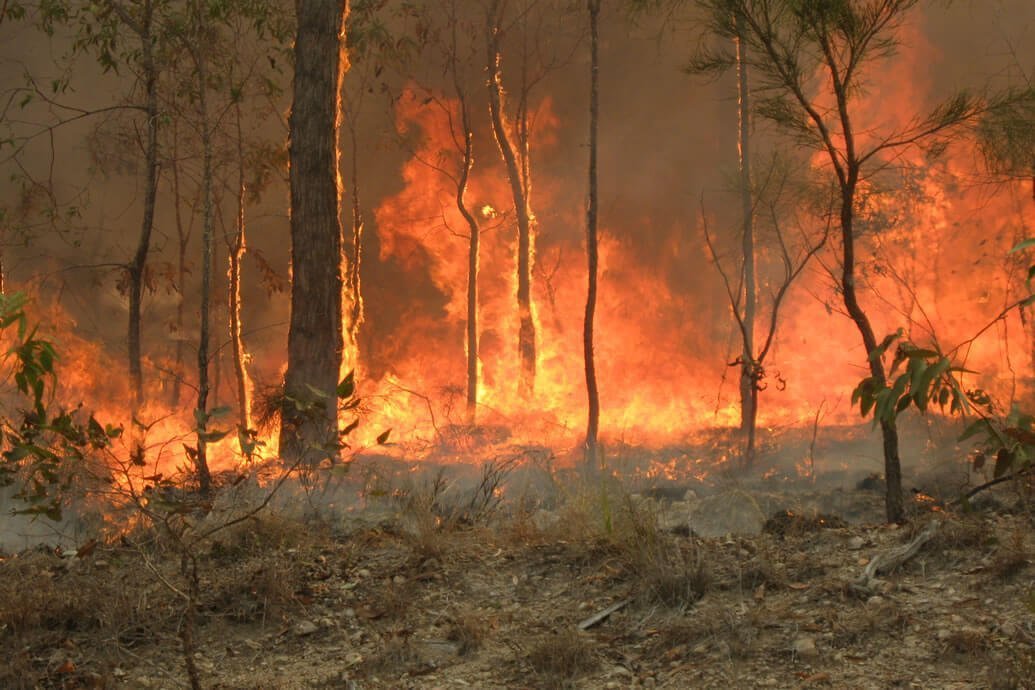 The 2009 Black Saturday bushfires in Victoria, Australia were a tragic illustration of the vulnerability and risk many communities face in the event of an uncontrolled wildfire occurring on a large scale. Having lived through a natural disaster of such magnitude, the Victorian government, and Victorians themselves, recognised the necessity and urgency of protecting the lives of vulnerable communities.

Following Black Saturday, the Victorian Department of Education and Early Childhood Development (DEECD) initiated a substantial and wide ranging review of bushfire and emergency management arrangements. One significant project established by the Department was the School Bushfire Protection Project (SBPP).

Through this project the Department engaged a consortium to manage a site visit and works programme at schools identified as being at high bushfire risk. The primary objective of the project was to improve the bushfire protection of students and staff at schools in high bushfire risk locations in a practical and timely manner. The consortium engaged by the Department included experts in fire risk modelling, threatened species assessments and engineering solutions for bushfire-prone locations. The team were directed by the Department to find solutions that improve safety, reduce bushfire hazards and minimise the impact of bushfire on the school site.

There have been significant developments in the understanding of bushfire modelling, engineering and incident response planning since the Black Saturday fires, with significant potential for improved planning, prediction and fire protection engineering.

Aurecon, a global engineering, management and specialist technical services business, was chosen to lead this consortium. The project focused on the use of multi-disciplinary teams that included government advisors, botanists, fire engineers (buildings), planners, environmental managers, engineers and procurement specialists. The strength of this approach was that it allowed for a systematic approach to risk identification and management, using the best techniques and approaches from government and industry.

Programme delivery involved assessing and managing works at 301 schools in Victoria identified as being particularly bushfire prone. The focus of the project was to identify, at each school deemed to be at bushfire risk, a school-specific shelter in place (SIP) and other mitigation measures that could be implemented to reduce risk from bushfires. A school’s SIP is required as part of the school’s emergency management planning and is a place of absolute last resort after all other options have failed.

While predicting fire behaviour under Code Red conditions is extremely problematic, a categorisation scheme for bushfire does exist and is based on Australian Standard AS3959-2009, which allowed for the categorisation of at-risk school buildings into one of six bushfire attack levels (BAL). The BAL system is in turn linked to a series of provisions under the Building Code of Australia that relate to protection from radiant heat and embers.

These assessments were undertaken on educational infrastructure and buildings across Victoria, classifying them from low to extreme, commen¬surate with geographic location and perceived vulnerability. Subsequent to this initial assessment of BAL ratings, the SBPP commenced in September 2010, with a scheduled completion date for those schools where works were required being November 2011.

The programme and methodology was specifically designed through workshops with school principals and representatives of the Department, who had full access to the senior team of project ¬managers, fire safety and fire protection engineers, ecologists and GIS experts. The resulting approach was structured to provide a high level of strategic direction, quality control, technical output and project coordination.

•    The level of risk exposure to vul¬nerable communities, specifically school children and teachers, would have been elevated if the February 2009 bushfires had occurred on a weekday, rather than a weekend.

•    The provision of a shelter in place (SIP) at each school would provide, for the first time, an independently assessed building into which ¬students and staff could retreat while awaiting evacuation, or as a shelter in the absolute last resort.

•    Investigations to determine the SIP requirements, and the capital investment to construct them, were relatively nominal and ranged from AU$ 10,000 to AU$ 200,000 for each school site.

•    The programme had the prospect to reduce the potential for bushfires to impact on schools through targeted and sensitive vegetation management. The blend of bushfire management, environmental and building fire engineering expertise allowed for significant flexibility and innovation in designing solutions for individual schools.

Working with technical partner Ecobiological, the team developed a methodology for delivering the BAL assessment programme in conjunction with the DEECD and other stakeholders.

The methodology followed a process that allowed the field assessment teams to build a bushfire risk profile of individual school sites to provide a powerful decision support tool. The process was cross-disciplined and involved biological sciences, program managers and specialist engineers.

The process was broken down into six key deliverables:

The first and most basic step was determining if the site was within an area designated as bushfire prone land. Registers of bushfire prone areas are most commonly maintained by state and local agencies, and this designation was checked and confirmed by an in-house planning team. All sites within bushfire prone areas are required to ¬consider bushfire risks in accordance with AS3959 Building in Bushfire Prone Areas when building or modifying existing buildings.

2. Classification of Vegetation into Fuel Types

Most areas of Australia have some form of ¬vegetation mapping, but this is normally done on an ecological basis. As bushfire fuel classifications are slightly different, this initial mapping of ¬vegetation was taken as a starting point, and then re-classified into the relevant fuel type under AS3959. This is both the single most important input into the modelling process, and the area in which the most common mistakes are made by inexperienced assessors.
The project fire management experts were backed by senior ecologists with extensive fire management experience to manage this process and provide the highest quality input data to the bushfire modelling.
Ecologically-based mapping was still valuable as this allowed the field assessment teams to identify potential environmental constraints, particularly habitat for threatened species. This is critical as the vegetation management needs to be sensitive to the environmental requirements of surrounding bushland, both now and into the future.

Slope has a dramatic influence on fire behaviour, with the rate of spread (speed) of a fire roughly doubling for every ten degree increase in upslope (steepness). The Geographic Information Systems (GIS) specialists were able to provide an initial calculation of slopes across the site, which was later checked in the field.

The methodology for delivering the BAL assessment involved fine scale, GIS modelling of fire causal factors (such as fuel load, aspect and topography) to create heat contour maps and determine the specific fire risk exposure for each school. Once the fuel and slope affecting the site have been determined, modelling of bushfire risk zones was undertaken and plotted onto a modelled fire extent across the entire site, and was categorised into the following zones:

•    Flame zone — representing the area of direct flame contact and is the most hazardous area. Buildings within this zone need to be specifically engineered if they are to survive and there is extreme hazard to people.

•    Building safety line — representing the zone where 10kW/m2 of heat energy will be -generated. Provided that they are secured against ember attack, buildings have a high chance of survival outside of this zone and it is also the limit of safe firefighter operations, effectively defining the defendable space around a building.

•    Personal safety line — representing the zone where 2kW/m2 of heat energy will be radiated from the fire front. This is the zone where ¬people in normal clothing can be expected to survive with minimal risk of injury.

Modelling is an effective decision support system, but requires careful checking against on-ground conditions. Site visits were used to check for ¬environmental and heritage constraints, and as an opportunity for consultation with school principals and senior staff. The heat contour maps allowed for genuine consultation with affected stakeholders. The visual mapping of risk zones facilitated a discussion on what could be done to address the risk.

The team’s senior fire management specialists for the project included highly experienced ecologists, and these staff have previous experience in designing asset protection zones that are sensitive to the ecological and aesthetic values of the surrounding bushland. Once all practical approaches to reducing the fuel hazard have been developed, the modelled exposure to buildings is re-calculated for the application of engineering upgrades.

Drawing upon expertise in building engineering, the building fire management teams modelled heat intensity to design a range of building upgrades to meet AS3959.

The level of building upgrades were specific to each situation, but commonly included the following elements:

•    Ember screening on all potential entry points (such as windows, weep-holes and roof vents).
•    Upgrades to window glass to increase ¬resistance to breakage under higher heat loads.
•    Changes to exterior building materials, including decking, walls and roof materials.
•    Bushfire shutters on windows and doors.
•    Sprinkler systems to ‘wet down’ the building and surrounds.

Significant among the breadth of the SBPP projects was the establishment of a programme of work in high bushfire risk locations.

Chum Creek Primary school is located 50km north east of Melbourne in Victoria. The school has around 50 students.

Chum Creek represented a school with very high fire risk, and was one of the first schools completed. The school is surrounded on all sides by tall open foothill forest, which places significant portions of the school in the flame zone. The site had crown fires on the grounds during the 2009 Black Saturday fires and the playground areas ¬suffered significant damage. The pine plantation directly to the north of the site was destroyed in the fires and has now been completely removed. This removed a major source of fuel, but the remaining forest still represents a significant risk during high fire danger periods. Road access to the site is also heavily forested, and as a result a dedicated Shelter in Place was an important risk mitigation measure.

The site had an existing shelter that was put in place after the Ash Wednesday fires in February 1983 but significant issues remained with this building, including:

•    Sprinkler/drencher was a pull-start motor that female staff were unable to operate.
•    Window shutters were heavy and could not be closed from within the building.
•    Significant areas of exposed wooden beams.

Works completed at the school include the removal of all eucalypts and acacias, removal of all trees with a diameter greater than 50cm, the application of fire retardant paint to external timber building elements, new fire shutters, new fire doors and the provision of an automatic start pump to the existing sprinkler system.

While the school is still in a high risk category, the vegetation management works and improvements to the Shelter in Place Building at the school have dramatically reduced the risk of loss of life in the event of a fire.

Gerry Quinn is an Executive with Aurecon

For further information, go to www.aurecongroup.com