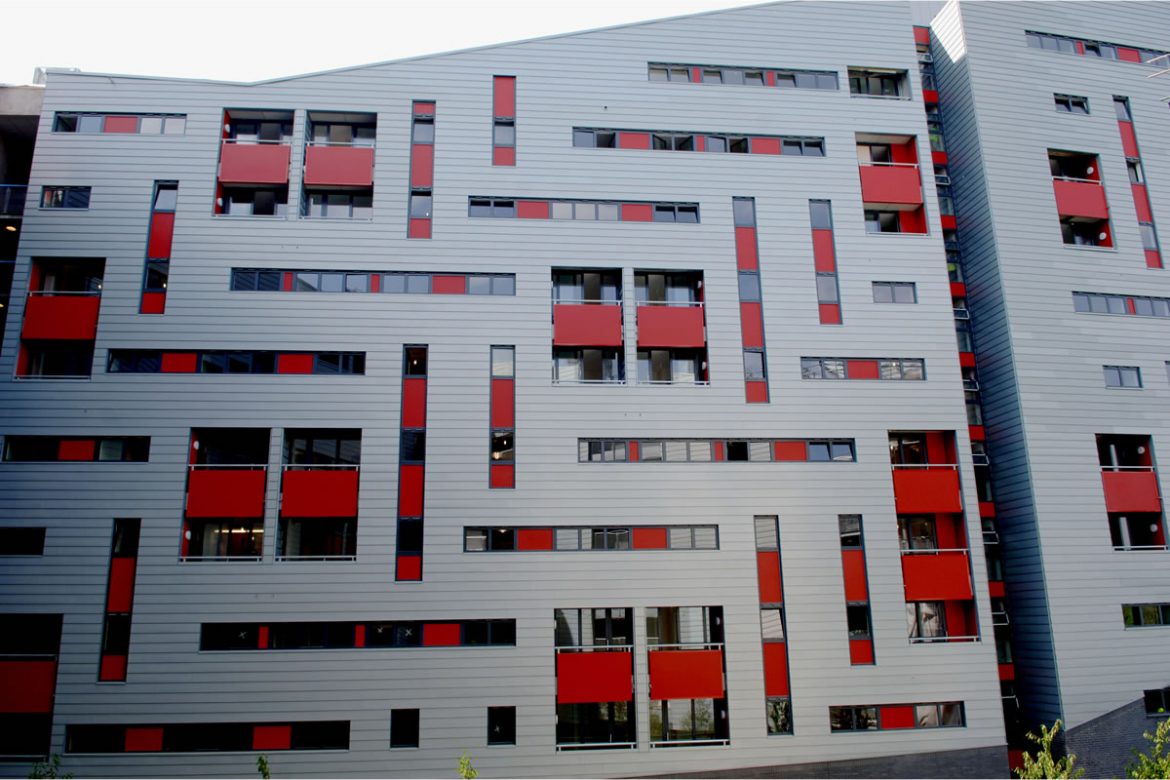 A mixed-use development, Ashburton Triangle comprises 249 flats over 12 floors, along with the ever-popular Arsenal Museum, and encloses a landscaped communal garden. The property is owned and managed by Newlon Housing Trust.

Nittan’s advanced, premium Evolution analogue addressable fire detection system was specified for this iconic development due to its exceptional reliability together with a very high degree of protection against unwanted false alarms. Furthermore, its flexible protocol allows for substantial amounts of information to be transmitted at high speed supporting high-performing cause and effect programming which was a key factor in the decision-making process.

Over 3,500 Nittan devices have now been installed throughout Ashburton Triangle, with a significant number being Evolution EV-DP smoke detectors. EV-DP smoke detectors have been designed to reduce false alarms caused by non-combustion products such as steam, dust and aerosols. Unlike other industry standard (single optical sensor) smoke detectors on the market that claim to distinguish between smoke and non-combustion products, the EV-DP effectively measures the actual particle size in the chamber via its combined IR and blue LED technology. As steam and dust are much larger particles than smoke, the detector won’t false alarm.

The Nittan Evolution devices feed back to eight Advanced MxPro 5 panels which together cater for very comprehensive, but simple to use cause and effect capabilities. The fire detection system integrates with a wide range of third-party safety systems installed throughout the premises, including a sprinkler system, intelligent escape signage, lifts, door entry and access control systems, and dampers for both individual apartments and rooftops.

Nittan worked closely with one of its Elite Partners, Somerset based Coomber Fire & Security Systems, on this extensive project. Commenting on this latest project between the two companies, Adam Pitman, Senior Fire Systems Engineer at Coomber Fire and Security Systems, said: “As a Nittan Elite Partner and long standing customer, we have extensive product knowledge of Nittan’s Evolution range and know from first hand experience just how reliable and flexible it is. The requirements for the Ashburton Triangle development were relatively complex, with extensive cause and effect programming and the necessity for staged evacuation. The high number of dwellings and potential for unwanted alarms also made false alarm management a key driver in our choice and we know the highly resilient Nittan EV-DP with the Dual Photoelectric sensor is more than capable of meeting these needs.”

“Nittan are delighted that Coomber continue to see not only the benefits of being a Nittan Elite Partner, but also the strengths of our individual products such as EV-DP. We look forward to working with Coomber and supporting them on many future projects of this nature.”

For more information, please contact Nittan on 01483 769 555 or by email at sales@nittan.co.ukor go to www.nittan.co.uk.