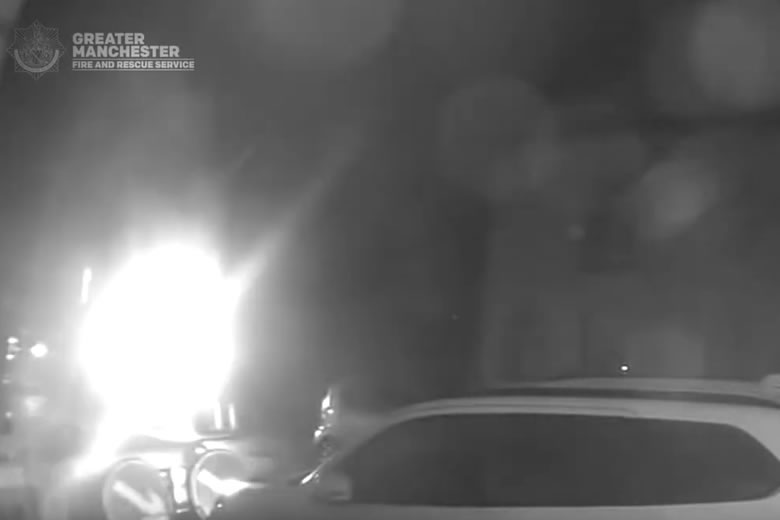 The video, caught on a nearby doorbell camera, shows the front window of a house in Failsworth being blown out following a fire caused by a number of modified electric bikes.

At 5:52am on Sunday 20 November 2022, three fire engines from Hollins, Manchester Central and Philips Park fire stations responded to the fire involving the living room of a terraced house and firefighters used two breathing apparatus and one hose reel to extinguish it.

Two casualties were assessed at the scene by paramedics before being conveyed to hospital for precautionary checks.

Greater Manchester residents are being warned to be careful when buying, storing and charging electric bikes.

The warning comes following a similar incident in August this year where a fire – that was most likely caused by an electric bike being charged – caused significant damage to a property in Manchester. Firefighters from Withington and Gorton were on scene for five hours as they put out the fire.

“This incident shows the devastating effects that a fire involving an electric bike battery can have.

“Batteries can be a fire risk if they’re over-charged, short circuited, or damaged, so it’s important to protect them against being damaged and to charge them safely.

“By following our advice on the storage and charging of electric bikes and scooters, Greater Manchester residents can help to keep themselves safe from fire.”

If you have an electric bike or scooter, remember to:

You can find further advice for the safe use of electric bikes and scooters on the GMFRS website: https://www.manchesterfire.gov.uk/your-safety/fire-safety/house-maisonette-or-bungalow/electrical/e-bikes-and-e-scooters/