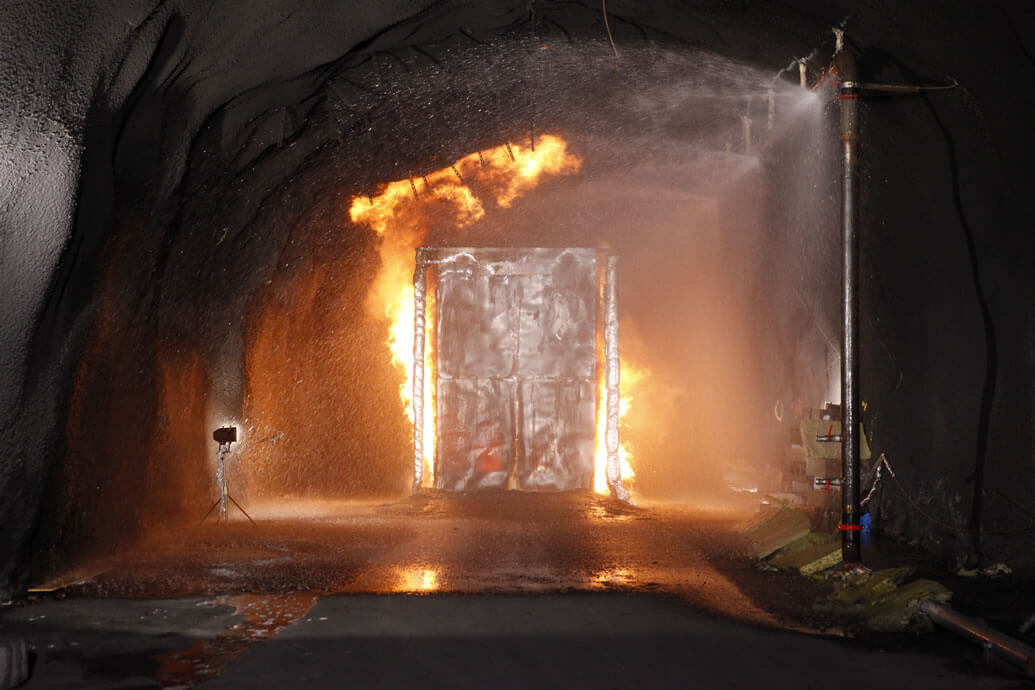 The Latest Research on Fighting Tunnel Fires has been published by TUSC – Tunnel Underground Safety Center – a research and development centre where researchers, engineers, government authorities, and funders gather around a common goal: improving safety in tunnels and underground structures, both today and tomorrow. At present, TUSC’s funding comes from the Swedish Transport Administration, the Swedish Fortifications Agency, SKB (Swedish Nuclear Fuel and Waste Management Company), and RISE. Discussions are ongoing with other possible stakeholders. RISE will be able to carry out research projects on behalf of society and the industry thanks to a total research funding of at least 3.5 million SEK per year for five years. The aim is for this base-level funding to be supplemented with research funding applied for in a traditional manner, such that the total annual turnover for research in the area will be roughly 15 million SEK.

Through the building of knowledge, TUSC’s vision is to contribute to safer underground structures, develop innovative technologies, and ensure that new methods reach those who need them. By communicating, developing, and ensuring that research results reach the market, new solutions to complicated infrastructure projects become possible, the safety of existing structures and rescue operations in underground environments is improved, and the processes behind these improvements are made more efficient.

Building on the previous research platforms created by RISE

For several years, RISE (previously SP) has, with the assistance of strategic competence funds, built knowledge platforms in areas that are of importance to industry and society. The strategic investment ‘SP Tunnel’ operated in the area of safety in underground structures, and is the competence platform that formed the basis for TUSC. Strategic competence funds are time-limited and granted in order to develop a particular area of operations, which must then cover its own expenses. The creation of TUSC through substantial external funding is just one example of the benefits brought about by SP Tunnel, which TUSC continues the work of, and which is already established as an important research organisation both nationally and internationally. At present, TUSC comprises more than ten senior researchers, engineers, and doctoral students, and has a wide network of internal and external competences in the fire research area. The broad range of knowledge embodied by TUSC is a key asset for its continued collaborations with its partners.
Important partners

Since its inception in 2009, SP Tunnel/TUSC has grown to become an important partner to government authorities, universities, and Swedish and international industry. Together, SP Tunnel/TUSC and its partners have proposed new rules and regulations, created educational documents, improved decision support for the design of underground structures, and developed more efficient risk-assessment and evaluation methods. TUSC has also contributed to making rescue operations in underground structures safer and more efficient. TUSC has actively participated in infrastructural and technical projects and conferences, conducted commissioned research, and provided basic education.

Maintaining and further developing the established knowledge base of TUSC requires directed and long-term funding. By developing TUSC in conjunction with key organisations in the government authority sector, trade and interest associations, and infrastructure owners, needs-based research can in time be implemented in the development work of these organisations. In addition, Swedish innovation power can be improved, as can the safety level of infrastructure – both during operations and in the event of an incident. The Swedish Transport Administration, the Swedish Fortifications Agency, SKB in collaboration with Nationella brandsäkerhetsgruppen (‘national fire safety group’; NBSG), and RISE have signed an agreement that ensures five years of funding of 3.5 million SEK per year, and discussions with other possible stakeholders are currently ongoing.

The purpose of the long-term base-level funding is to ensure that the demand for national skills in the underground area is met, and the invested funds will be used in such a way that they contribute to multiple goals, for example by producing answers that can be utilised by multiple stakeholders. Those who seek solutions and contribute to the funding will be able to directly influence the needs-based research that is carried out within TUSC through participation in the TUSC Steering Group. Through consultation with the members of the Steering Group, specific issues relating to the needs of individual organisations will be investigated. Research and development projects can thus be either broad and interdisciplinary – with the intention of solving issues for many stakeholders – or narrower, such that they solve technical issues of a more specific nature.

A saving for society of almost half a billion SEK! This is what fire protection solutions developed by RISE in collaboration with, among others, the Swedish Transport Administration (STA) and Brandskyddslaget have resulted in. The consultancy company Ramboll has calculated the figures.

Between 2010 and 2012, the STA carried out a development project which had the aim of designing an adapted fixed fire fighting system (FFFS) for road tunnels. The project was carried out in collaboration with Brandskyddslaget AB, Nordic Sprinkler, Bravida, and RISE Fire Research (formerly SP Fire Research).

The overall objective was to develop a cost-effective system that suppresses the growth of a fire and prevents it from spreading between vehicles.
The STA initiated the project during the final stages of the planning of the Northern Link tunnel, but also aimed to find solutions that could be used in the Stockholm Bypass tunnel system and other Swedish road tunnels.

Having been commissioned by RISE, the consulting company Ramboll conducted a study that shows that RISE’s work has had a significant impact on many of the decisions relating to FFFS solutions that have been made by the STA. Specifically, the report concludes that RISE Fire Research (together with the STA and the private companies Brandskyddslaget AB, Nordic Sprinkler, and Bravida) has contributed to net savings of almost half a billion SEK. Truly a good return on invested research funds (roughly 10 million SEK) by the STA.

The development of the new concept

During the project, a new sprinkler-based FFFS was developed and tested. The result is a system that features side-wall nozzles (nozzles that emit water towards the walls of a tunnel) with a great range, and water supply systems with pipes that are both less expensive and fewer in number than those found in a traditional sprinkler system. A number of previous issues of Brandposten have contained articles that describe the various tests that were carried out during the development process. RISE Fire Research contributed in the early stages of the project by participating in two hearings, where it was officially asserted that the STA was on the right track in its development of the FFFS. During the development process, RISE Fire Research was able to verify the efficacy of the system through testing and expert knowledge. According to the report, the test results and expertise provided by RISE Fire Research were decisive in the STA’s decision to install the system in the Northern Link tunnel. RISE Fire Research also played an important role in the aftermath of the development project, when the Swedish Transport Agency required further support in demonstrating the well-functioning efficacy of the system. The new FFFS became operational in November 2014, when the Northern Link tunnel was opened to traffic, and the system will also be installed in the Stockholm Bypass tunnel system, which is planned to open for traffic in 2025.

According to Ramboll’s report, the economic effects of RISE Fire Research’s participation in the development work are significant. The final results of the cost-benefit analysis that Ramboll performed show that the project has been very beneficial from a socio-economic perspective, representing a net value of almost half a billion SEK and an income-cost relationship of roughly 50. This means that the socio-economic value of the contributions of RISE Fire Research are approximately 50 times greater than the development costs incurred by the project. This estimation is likely very conservative, as Ramboll only performed calculations for the Northern Link and Stockholm Bypass tunnel systems. The results of the development project have now been disseminated to other tunnel projects in Sweden and abroad. The developed FFFS stands a good chance of becoming the new Swedish standard for road tunnels. The new system also results in savings in other technical systems (ventilation, structural, detection), although these are not quantified in Ramboll’s report.

One of the results of our excellent collaboration with the STA and other organisations is that RISE Fire Research will be able to provide continued support to society and industry through a new centre, TUSC (Tunnel and Underground Safety Center), which has an agreed research funding of at least 3.5 million SEK per year for five years. The funding will be provided by the STA, the Swedish Fortifications Agency, SKB (Swedish Nuclear Fuel and Waste Management Company), and RISE. Discussions are ongoing with other possible stakeholders.