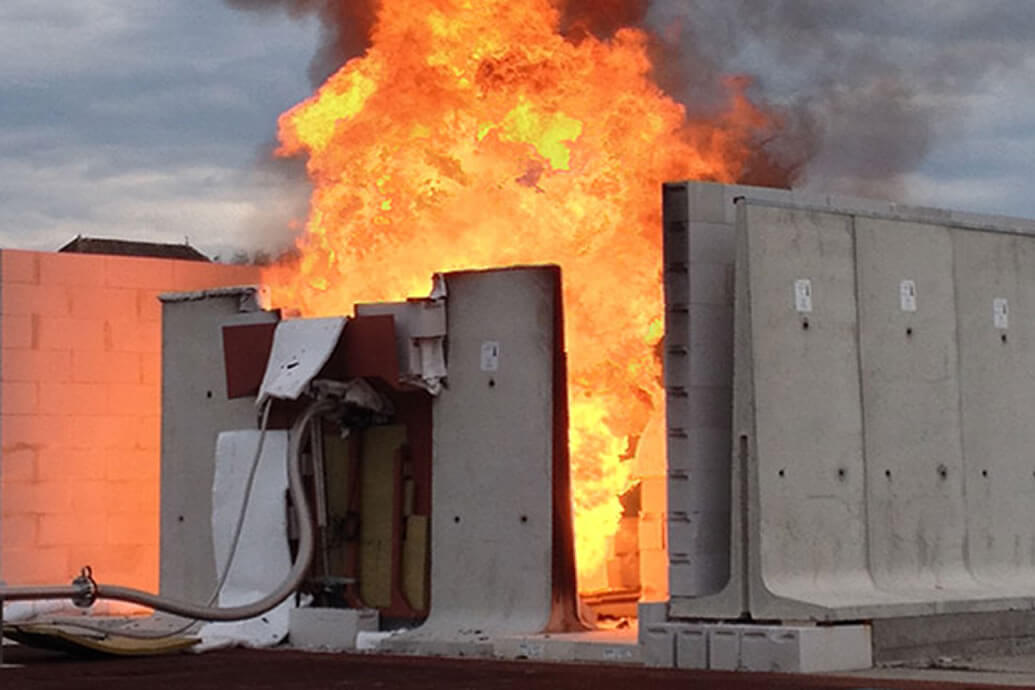 If a leakage of pressurized hydrocarbons is ignited a jet fire may occur, which is highly challenging for equipment and passive fire protection. Therefore rather tough fire tests are needed to be prepared for a jet fire. The petroleum companies are very concerned about this to avoid catastrophic fires as onboard the oil rig Piper Alpha in 1988. SINTEF NBL has been involved since the start of the development of the very first jet fire test method in the 1990’s, and has an extensive experience with performing both standardized and ad-hoc jet fire tests.

A jet fire is characterized by a sonic velocity of the burning gas. This leads to several challenges for a product that should resist the fire exposure, which can be summarized as follows:

In a standard jet-fire according to ISO 22899-1, the tests specimen shall be exposed by a 0.3 kg/s propane flame from a nozzle having an opening diameter of 17.8 mm.The distance between the nozzle and the specimen is 1 m. This produces a gas velocity of approximately 300 m/s at the nozzle opening, and 100 m/s at the specimen surface. The high velocity leads to a high rate of convection, and a rapid heating of the specimen. The non-combusted gas will enter openings and contribute to erosion, or lead to flames on the unexposed side of the specimen. Temperatures in a standard jet fire may vary from 500 – 600 °C in the point where the mixture of gas and air is rich and the propane has a cooling effect, up to 1100 – 1200 °C in areas with high turbulence and effective combustion. This may lead to tensions in the tested material and cause further mechanical stress.

The purpose of the testing is usually to show that passive fire protection will keep the steel temperature below 400 °C, but other acceptance criteria using time to loss of integrity or leakage rate are also used. Every oil company can define acceptance criteria for their own equipment, and this may vary between different process areas. It is often required that equipment shall be tested in jet fire with a heat flux of 350 kW/m2. The jet fire standard does not define any requirements to heat flux level or how this should be measured, so this must be assessed in each single case. By interpreting the heat flux as black body radiation we get a defined relation that can be used when assessing the real heat flux in a jet fire test. If a test specimen shall receive a heat flux of 350 kW/m2, it must have been engulfed by flames with a temperature of at least 1300 °C during large parts of the test. Figure 1 shows the relation between temperature and black body radiation according to Stefan Boltzmann’s equation. These temperatures are higher than the temperatures expected in a standard jet fire test. Therefore we apply a larger test furnace where the test specimen is more enclosed by flames, and thereby higher temperatures. In this way we may distinguish between hot jet fires where temperatures in the range 1300 –1400 °C are obtained, and “cold” jet fires where temperatures of 1000 – 1200 °C usually are reached.

Figure 1: Relation between temperature and black body radiation according to Stefan Boltzmann’s equation.

Image 1:A test specimen of a pipe is engulfed by flames in a jet-fire test. The nozzle and the ignition torch are shown as silhouettes. Photo: Reidar Stølen – SINTEF NBL

Image 2: A standard jet fire furnace with the propane jet coming in from the left side. Photo: Reidar Stølen – SINTEF NBL

Image 3: To obtain higher temperatures, the specimens are enclosed by flames in a larger furnace. This specimen was exposed to approximately 1400 °C. Photo: Sandra Hoddø Steinbakk – SINTEF NBL