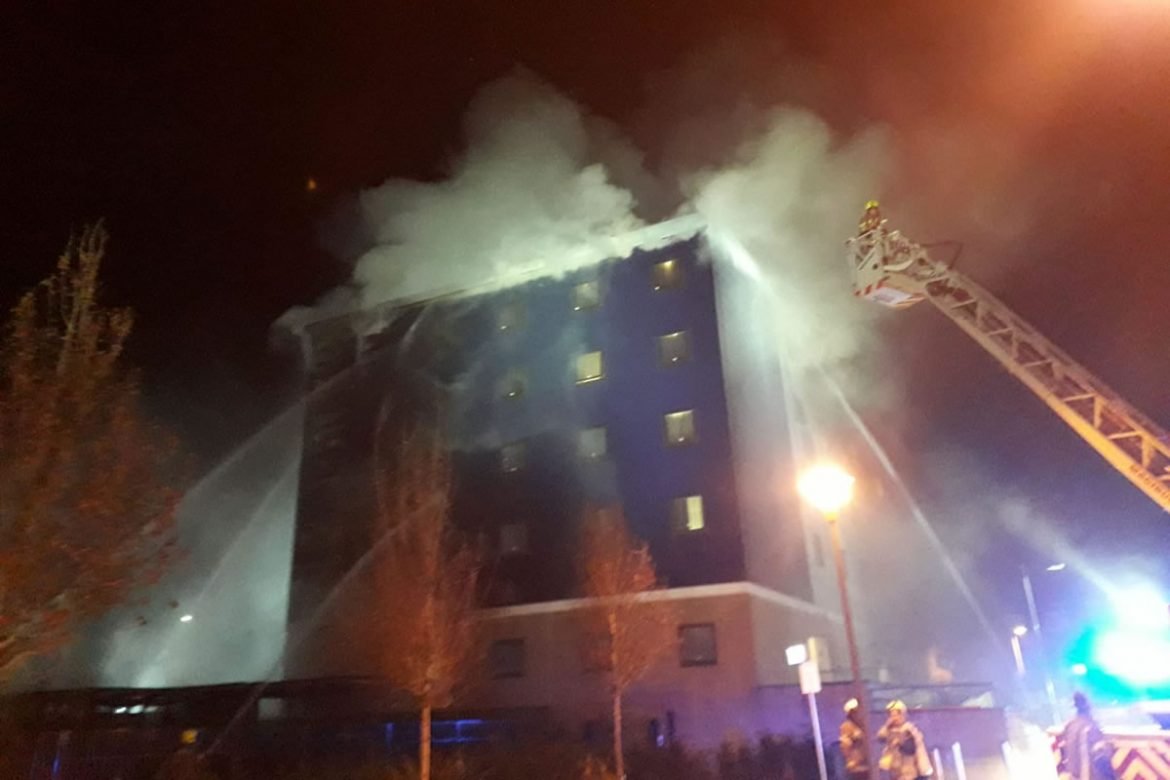 Guests reacted “casually” to a fire at a West London hotel believing the fire alarm to be a “prank.”

Fifteen fire engines and 100 firefighters battled the blaze at a Travelodge in Brentford, evacuating around 160 guests and members of staff – there were no reported injuries.

The fire is believed to have started in the bin room on the ground floor of a neighbouring building before the flames spread up the exterior of the five-floor hotel.

The London Fire Brigade (LFB) were called at 02:52 GMT and the Brigade confirmed the fire was under control four hours later.

The Brentford Travelodge blaze comes just one day after the Grenfell United group warned of another ‘Grenfell-like’ fire in a letter written to Boris Johnson.

Penned in the wake of the fire at private student halls, The Cube, the letter warns: “The Bolton fire must be the final warning. Action is needed now.”

One guest, from Barnsley, who gave his name as Nigel, told the BBC he initially thought the alarm was “a hoax.”

He added: “We woke up and the fire alarm was going off, we thought it was a prank and maybe a few lads having a bit too much ale – but obviously it wasn’t.”

Alarm fatigue occurs when a person becomes desensitised to an alarm, such as a fire alarm, due to repeated false alarms and therefore fails to react appropriately in an emergency – as evident with residents of The Cube, and now the guests at the West London hotel.

MyLondon spoke to two guests, Austin Tant and Jay Phelp, who work for a blacksmiths company in Dorset, Austin, said: “I woke up at about half two to the fire alarm. I casually slung my work gear on as I know these fire alarms don’t often mean the real thing.

“I got outside and the bin shed of the hotel was on fire.

“It spread very quickly up the cladding and it was really difficult for firefighters to actually access the flames with hoses.”

A rest centre was set up by the local authority, with buses brought in to relocate guests to another Travelodge Hotel in Hounslow.

Austin’s colleague, Jay, said: “The first thing I knew, it’s about half two and the fire alarm is going off.

“I thought it was another false alarm or someone was smoking in their room so I laid there for a minute, realised it wasn’t a false alarm, then got up, got dressed and came downstairs, where I saw the fire.

“The fire was well established by the time we saw it.”

An LFB spokesman said “early indications” are that the fire was not thought to be cladding-related, the cause of the fire is under investigation by fire officers and the police.

This is another example of the dangerous consequences that false fire alarms can have; reducing the confidence of the general public in fire alarms, causing alarm fatigue, and allowing complacency to creep in. All contribute to a drastic reduction in response time and evacuation, but they can be prevented.

As recommended in BS 5839-1:2017 manual call points can be fitted with a protective cover preventing false alarms whether accidental or malicious, halting alarm fatigue.

One guest took to Twitter to stress the importance of responding to every fire alarm as if they are real: “Please get out of wherever you are when you hear the fire alarm, so many of us thought it was a false alarm but it was very real, just get out,” she tweeted.

Another commented that guests only began to evacuate the burning building when a member of the public “ran up and down every corridor on each floor telling us to leave.”

As with the Bolton University fire, guests ignored the fire alarm assuming it was caused by a cigarette or an ill-thought-out joke, convinced “fire alarms don’t often mean the real thing” – this time it did.

By the time many guests realised the gravity of the situation the fire had already engulfed the building, and although everyone made it out safe, the reality is that the outcome could have been very different.