Focus on Tunnel Safety in Norway 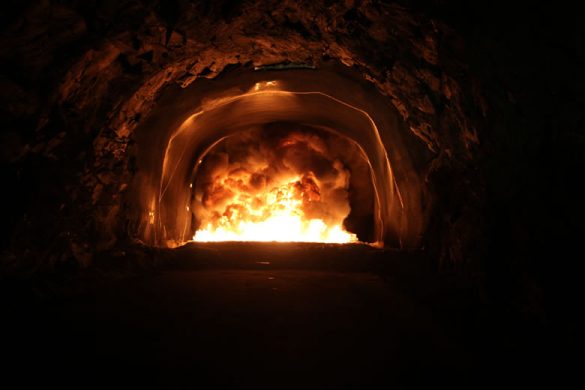 During the last few years there has been an increased focus on tunnels and tunnel safety in Norway. A large amount of money is to be invested in upgrading Norwegian tunnels; this has sparked a growing interest from the industry to develop new and innovative safety measures. RISE Fire Research has been an active partner through this work and is a member of the Norwegian Tunnel Safety Cluster.

In Norway there are approximately 1.100 road tunnels and about 800 railroad tunnels. Several serious fires has occurred in Norwegian tunnels during the last few years. In conjunction with upgrading the tunnels to satisfy the EU tunnel Directive and to reduce the possibility of catastrophic fires, a large amount of money is to be invested in new technical solutions for tunnel safety. One of the challenges is that the Directive is restricted to new innovative solutions, which leads to the need for comprehensive testing and documentation of new solutions in order to deviate from the Directive. One example is the use of evacuation rooms in long single bore tunnels. The Directive states explicitly that the use of evacuation rooms is prohibited, however, it also states that there are to be no more than 250 meters between evacuation exits leading to open air. This is a challenge in long single bore tunnels. Some of the same challenges are seen for ventilation, lighting and other technical systems.

The large amount of money to be invested in upgrading Norwegian road tunnels has sparked a huge interest from industry. More and more organisations are now involved in tunnel safety. Several organisations, both from offshore and onshore industries, are now looking to get a foothold within the tunnel safety sector. The diverse backgrounds of these organisations enhance the possibility to develop new and innovative solutions. A positive outcome of this shift of interest is the establishment of the Norwegian Tunnel Safety Cluster (NTSC).

NTSC was established in 2016. The cluster program is a governmentally financed project that is intended to give added value through sustainable innovation. Helen Roth, who is the leader of NTSC and was a key participant from the start, experienced a great interest from organisations involved in tunnel safety, therefore the number of companies in the cluster increased rapidly. 69 organisations collaborated to develop an application for the cluster program, which was accepted within the cluster program at first try. NTSC has a clear goal: it shall contribute to new and innovative solutions making tunnels safer, resulting in fewer accidents.

In addition to creating an arena for research, innovation and business development for its members, NTSC also arranges an annual conference focusing on technology and humans. RISE is well represented both with presenters during the conference and in the conference program committee. This year’s conference was held in Stavanger 18-19 June. More information can be found at ntsc2018.no

RISE Fire Research, both in Norway (Trondheim) and Sweden (Borås) has been active in tunnel safety work for many years. In Norway we started with full scale tunnel fire testing in the late 1980s and have participated in several large research projects, including the large EU project UPTUN. This project laid the foundation for the EU Directive on tunnel safety. Today RISE is among the world’s leading organisations within the tunnel safety research area and has taken the initiative to establish TUSC (Tunnel and Underground Safety Center). TUSC is intended to facilitate research, development and innovation for the tunnels and underground facilities of today and tomorrow. The project is intended to run until 2021 and has an annual funding of 3,5 MSEK. TUSC was presented in more detail in a previous edition of Brandposten (#56).