Fires in biofuels and waste 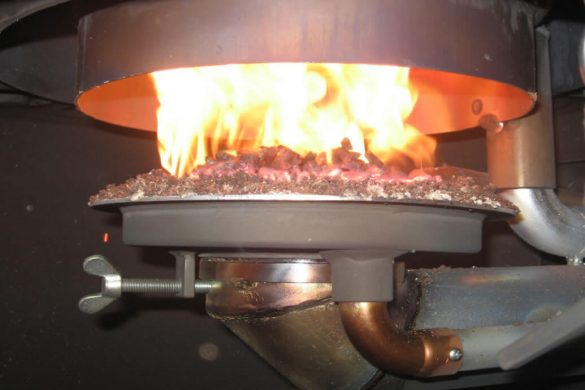 Fires in biofuels and waste

Large scale handling and storage of biofuels and waste, which can involve significant risks of fire, occur in many different business activities around the country.  As part of the work of a Swedish Fire Research Board project, we have collected statistics on the frequency and extent of fires in such facilities.  We have also obtained information on which material fractions are most commonly encountered, and on the ways in which they are stored.

The move from fossil fuels to various types of biofuels/waste as fuel has resulted in considerably more handling and storage of many different material fractions.  A preliminary study carried out in 2008 and financed by the Swedish Fire Research Board (SP Report 2008:51) found that there are no specifically collected statistics on fires in biofuel stores or biofuel plants.  Some statistics were collected for fires in waste heaps and landfill sites at the beginning of the 2000s, but as considerable changes have occurred in the handling and storage of such materials in recent years it can be suspected that these statistics are no longer fully valid.  The objectives of this study have therefore been to obtain updated statistics on fires in such plants, to collate the experience obtained from these incidents, and to improve knowledge of how various types of biofuels and waste are stored.

The work included an analysis of the Swedish Civil Contingencies Agency’s incident data, questionnaires to the industry and to the country’s county administrations, studies of associated investigations and presentation of experience from a number of fires that have occurred.

Outdoor storage in heaps is the most common form

The questionnaire to the industry received 81 replies, from which it appears that about 85 % of respondents stated that outdoor storage, in stacks or in heaps, not compressed, is the most commonly used.  The next most common forms of storage are mechanically compacted heaps and baled materials, but are used by only about 15 % of the respondents.  Cellular storage, i.e. in which the material is stored in pits, compacted and then covered with an airtight material to prevent the access of oxygen, is used by only 6 % of the respondents today, but is a form of storage that is forecast to be increasingly used for the storage of waste.  The greatest quantity of waste that is stored outdoors consists of commercial waste and recycled wood.  As far as biofuels are concerned, sawdust, bark, woodchips from branches and tree tips account for the greatest quantities.

Indoor storage is required for biofuels and various fractions intended for materials recovery in which the material must be protected against moisture.  Most materials are stored in flat storage buildings, though storage in silos is used for some materials.  Silo storage is often used in the pellets industry, but is also often used as an intermediate stage in fuel handling in combined heat and power plants.  Wood pellets are the material that is stored in the greatest quantities indoors.

Statistics from the MSB incident data base show that, on average, about 580 fires per year – linked in some way to biofuels or waste – were reported over the period 2005-2013.  The greatest number of fires (676) occurred in 2008, after which the statistics show a weakly declining trend.  The trend for Fires in buildings is stable, while the number of fires classified as Fires not in buildings (outdoors) vary considerably from year to year.

Among the reported fires there were many that were not relevant to our project, i.e. industrial handling and storage of biofuels/biomass and waste.  We therefore performed a more in depth analysis of the incident reports for 2012.  Of the total of 488 fires, only 154 could be safely regarded as relevant.  One group of 220 incidents could be eliminated, e.g. fires in scrap heaps, grass fires, fires having their origins in domestic fires, arson that could not be linked to industrial storage, spontaneous ignition in compost heaps, bark mulch in flower beds, manure heaps etc.  The remaining 114 fires were regarded as uncertain, generally due to the fact that the incident report had not been filled in with all details.  Thus only about 30 % of the reported incidents were regarded as relevant.  If we assume that the review of 2012 is representative of the entire 2005-2013 period, it means that an average of about 190 fires occur in industrial plants per year, of which about 40 are classified as Fires in buildings (25 % relevant) and about 150 as Fires not in buildings (35 % relevant).

Among the relevant fires, it can be noted that the commonest type of Fires in buildings occurs in CHP/district heating plants and in the wood industry, and from which the commonest starting points are stated as storage, silo and heap.

The commonest outdoor fires occur in a stack or heap of stored material, with woodchips, bark, sawdust, peat and branches and tree tips being the most common.  The MSB statistics and the questionnaires state that the most common cause of the fire is self ignition, both for Fires in buildings and for Fires not in buildings.  Fires in process machinery and conveyors are also relatively common.

The replies to the industry questionnaires showed that fires occur only rarely in most businesses, often with several years between one fire and the next.  However, there are a few particular businesses that suffer considerable more fires, of up to 6-8 per year.  Work in improving preventive measures in these sectors would result in a noticeable reduction in the total number of fires.

A small number of fires account for the high cost incidents

The industry questionnaire asked for information on the costs of incidents and on the quantities of burnt or damaged materials.  The analysis is based on information for 2011 and 2012, with costs for 25 and 29 fires respectively.  Although the limited number of replies represents an uncertainty, they show that the annual cost of fires can vary very widely.  In most cases, the cost of the damage caused by any one fire is less than SEK 1 million.  However, major fires do occur, with resulting costs of SEK 5-50 million and, in some cases, even higher.

On the basis of an average annual frequency of about 200 fires, these figures indicate that the average cost of fire damage amounts to about SEK 150-350 million, and that the quantity of burnt and damaged material amounts to about 6500-7500 tonnes.  However, the costs and quantities can increase very considerably for individual years during which some more extensive major fire has occurred.  As an example, the major woodchips fire that occurred in Mönsterås in 2011 resulted in a total cost of about SEK 300 million, destroying over 50 000 tonnes of woodchips.

About 70 % of the fires were detected through observation of smoke, visible flames or smell.  The use of video monitoring and IR cameras is becoming increasingly common and can be expected to increase further in the future.  The fires are generally extinguished by conventional water application using hose line nozzles or water monitors.

Much can be learnt from experience of earlier fires, and should be utilised more actively.  Unfortunately, in many cases, the documentation of incidents and fires is inadequate, with the result that expensively acquired knowledge and experience are quickly lost.

The report presents examples of the improvements that have been made by making use of the experience obtained from incidents that have occurred.  A common feature of these is that such improvements are the results of a strong response from the company management, implementing organisational fire prevention measures based on some form of risk analysis and the preparation of clear guidelines for operation.  Key factors are to ensure continuous monitoring of the area, ensure that an adequate water supply system is available, enabling fire fighting quickly to be started, and to ensure that all personnel are properly trained and motivated.

Number of reported incidents to MSB linked to fires in biofuels or waste for the period 2005-2013.  However, the number of fires actually relating to industrial handling and storage of biofuels and waste make up only about 30 % of these fires, i.e. on average about 200 fires/year.

Spontaneous ignition in heaps of stored material is the most common cause of fires in facilities handling and storing biofuels and waste.