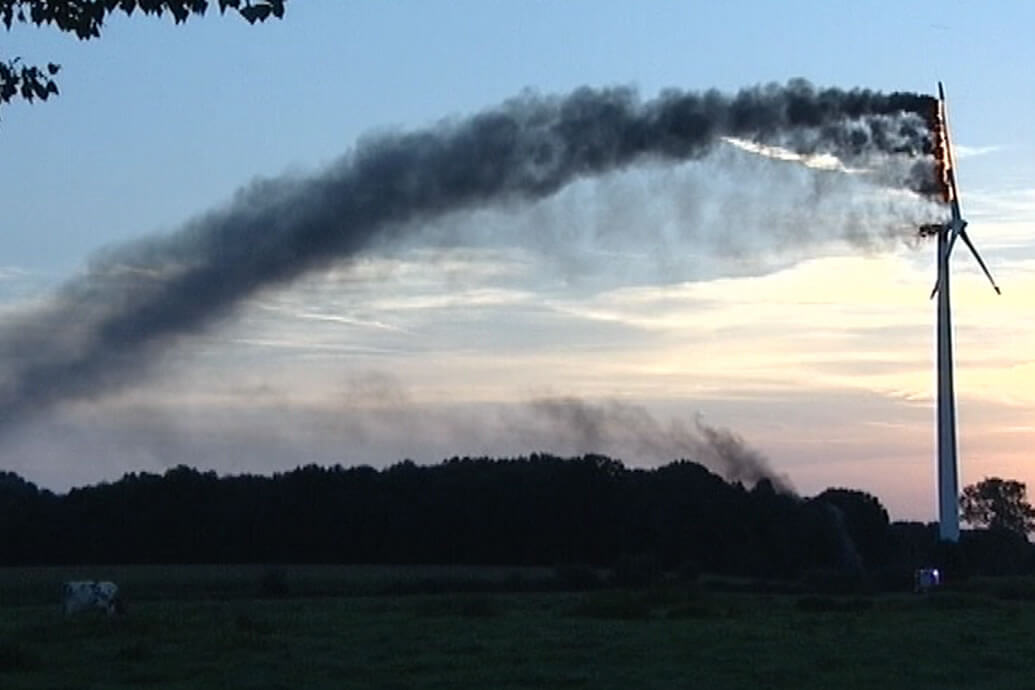 In 2013, wind power supplied 1% of the world’s total energy demands, and at present, offshore wind power constitutes roughly 2% of the world’s power production capacity. More than 91% (8,045 MW) of all offshore wind turbines are in European waters, primarily in the North Sea (5,094 MW: 63%), the Atlantic (1,808 MW: 22%), and the Baltic Sea (1,142 MW: 14%). Optimising the production of this green energy source is of interest to many. Fires in wind turbines have been identified as a possible cause of losses, and are a safety aspect for personnel. A number of challenges were identified and discussed at a seminar in September 2016, and will be considered in a coming research project.

Background to the fire safety of wind turbines

Optimising wind power so as to minimise disruption of production insofar as is possible would thus be enormously positive from an environmental perspective. The occurrence of fires in wind turbines is one such disruption, and the focus of a study that was performed by SP Safety at SP Technical Research Institute of Sweden.

The study shows that 10-30% of all incidents in wind turbines that lead to a halt in production are due to fire. This is true for both on- and offshore wind turbines. According to data from the Caithness Windfarm Information Forum, the number of incidents annually ranged between 120 and 160 for the years 2007-2012. A study by G. Rein, Reader in Thermal Energy at the Department of Mechanical Engineering of Imperial College, London, estimates that this figure only constitutes 10% of the actual fire incidents. Unfortunately, the validity of the data is uncertain as there is currently no formal process for reporting incidents.

The literature provides a range of numbers for wind turbine fires, depending on the source of information. The most reliable source is deemed to be Det Norske Veritas Germanischer Lloyd (DNV GL), an international consulting firm that gathers statistics, which states 0.5 fires per 1000 wind turbines per year. With regard to frequency, problems due to fire may be less significant than other issues, such as mechanical malfunctions in offshore wind turbines. Wind turbine fires have, however, caused substantial losses (equal to or higher than the original cost of the wind turbine), particularly at sea. Offshore wind turbines are more difficult to access in case of fire than onshore ones. The causes of fire incidents appear to be similar for on- and offshore turbines, and are not simply a problem with regard to the continuity of operations, but primarily a matter of safety. In 2013, a crew of four engineers died in Ooltgensplaat, the Netherlands, in a wind turbine fire.

The causes of fire are currently only recorded by insurance companies when the damage exceeds the insurance policy excess, i.e. when they must pay compensation. Various sources of information give the following causes of fire incidents: The highest frequency is ignition shortly after maintenance and repairs; followed by lightning strikes (although these still lead to fires, their incidence has decreased in recent years with changes to the construction of turbines); electrical failure; ignition due to a hot surface; cooking. 50% incidents involve people in the nacelle, and thus a fire becomes a safety risk.

For a fire to start, an ignition source and combustible material are required. Possible ignition sources include lightning strikes, overheating, surface ignition, and electrical failure. Combustible materials inside a wind turbine include the composite materials of the blades, the interior surfaces and linings of a nacelle, and the main shaft of the turbine itself. Furthermore, there are flammable liquids in various parts of the nacelle, including the gear box, hydraulic system, oil pumps, mechanical brake, and generator.

The roles of active fire protection systems include detection (of flames, heat, gas, and smoke), alerting personnel and rescue services, and activating systems for fire suppression or extinguishing. Active systems may, however, emit gases or aerosols that can lead to non-thermal damage to the nacelle.

National requirements apply to questions of health and safety. Depending on the location of the turbine and who owns it, the development of an emergency-preparedness plan may be one of these requirements. It is recommended that wind farm operators provide a detailed plan of the fire safety precautions in place, including the specifics of emergency response and evacuation. These documents should be developed in collaboration with the relevant rescue services. In addition, it is recommended that employees and rescue services receive relevant training.

Continued work: A research project on fires in wind turbines is launched

In September 2016, fire safety researchers discussed the subject of wind turbine fires with manufacturers, energy suppliers, and representatives of the active and passive fire protection system industry. A research project has been launched, with funding currently being sought. The project will be directed by Dr Anne Dederichs, associate professor at the Technical University of Denmark and senior researcher at SP Technical Research Institute of Sweden; Raúl Ochotera, researcher at SP Technical Research Institute of Sweden; and Dr. Guillermo Rein, Reader in Thermal Energy at the Department of Mechanical Engineering of Imperial College, London.

Main image: A fire in a wind turbine in Isselburg, Germany, 2016 – Fire Safety in Wind Turbines