Assessment of a major fire in a parking garage 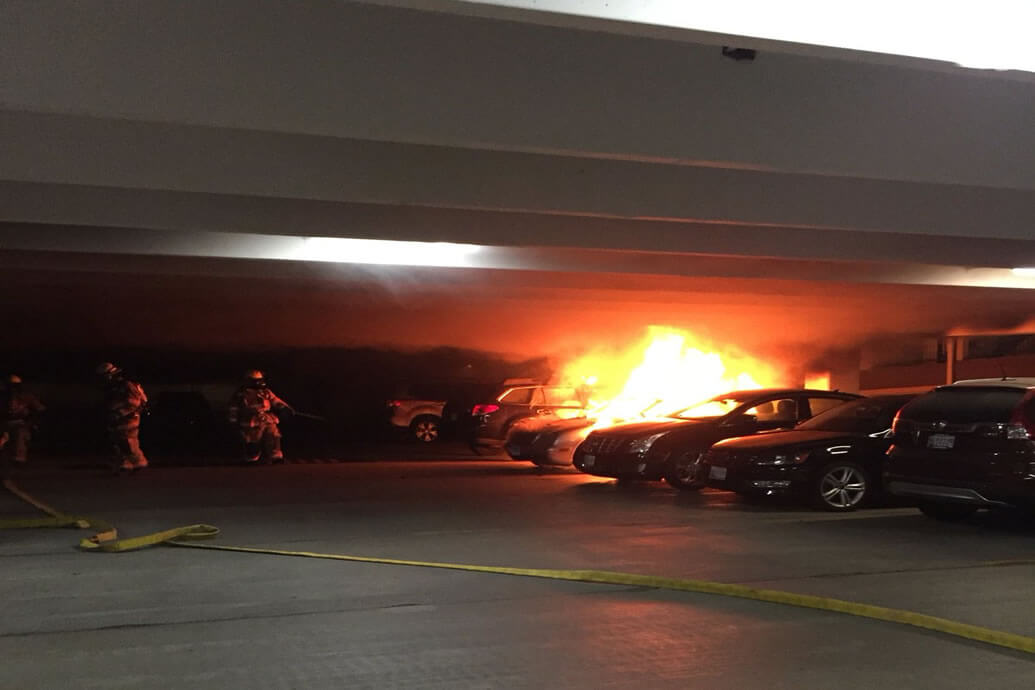 A serious fire in a parking garage occurred in Gothenburg in March 2011, totally destroying about 20 cars. According to the fire and rescue services, fire fighting was complicated by the unexpectedly high temperature developed by the fire. The fire lasted about four hours, and caused damage to the concrete structure. The Swedish Cement and Concrete Research Institute (CBI) and SP Fire Technology have investigated the damaged structure.

The fire had been burning for about ten minutes when the fire and rescue service received the alarm. Wearing SCBA, the firefighters could enter the garage for only a few minutes as the temperature was unusually high. Fire fighting had to start by cooling the floor: fans were positioned behind the firefighters in order to cool their backs and prevent the spread of smoke in the neighbouring stairwell and stores area. It is estimated that the severe fire lasted for about three and a half hours, after which it was possible to extinguish each car one at a time.  The high temperature of the fire resulted in the asphalt melting under some of the cars, necessitating having to break them loose when clearing up after the fire.

The parking garage, built on two levels, was constructed during the 1960s. Above the upper level there is an eight storey apartment building and a courtyard area with grass, children’s play areas etc. for the residents of the building. The parking garage was constructed by an in situ casted ribbed floor structure supported on concrete columns and steel beams. This construction is similar to that of present day double T beams. The concrete has a high w/c ratio, estimated as being of strength class K25. Gypsum board was secured to nailing battens on the underside of the webs, initially protecting the beams against the fire. The fire occurred on the upper level of the garage, in the area underneath the apartment building. The actual cause of the fire has not yet been identified. After the fire, the ribbed floor structure was supported with temporary falsework in order to ensure their load carrying capacity. The steel beams were protected by a 30 40 mm thick layer of sprayed asbestos, which required extensive removal.

Assessment of the structure

When CBI and SP Fire Technology started the assessment, the burnt out cars had been removed and all the asbestos cleared. Visible damage such as cracking, spalling and colour changes but also results from hammer sounding were documented. Measurements of the beams webs and slabs were conducted using ultrasonic measurement and a rebound hammer. Ultrasonic velocity in concrete depends mainly on the concrete’s elastic properties and density. Concrete exposed to high temperature suffers loss of compressive strength and stiffness (modulus of elasticity). Ultrasonic measurement is a time-saving way of identifying fire damaged areas, both in the field and in the laboratory. The rebound hammer can only identify areas where the concrete properties significantly are reduced. Both these methods of testing were used in the garage in order to identify damaged areas through comparison of measurements.  Reference measurements were made in a part of the garage that had not been affected by the fire. The gypsum board support battens, electrical installations and a plastic window in this area were all intact, which indicates that the temperature there had been low.

It was decided, in conjunction with the structural engineer (Tellstedt i Göteborg AB), after the damage assessment, that about 60 cores should be drilled from the upper level in the floor, columns, walls, beams and ceiling structure to permit more detailed analysis. The cores were taken and their compressive strength measured: for some of them, splitting strength and carbonation depth were also measured.  The results clearly show that the concrete’s mechanical properties have been severely degraded by the fire. The carbonation depth was also severely affected.

The property owner, Göteborgs stads bostadsaktiebolag (Gothenburg City Homes Ltd.) is at present working with Tellstedt i Göteborg AB on an action plan. The garage level damaged by the fire has been divided up into zones, in each of which the necessary repairs will be made. In connection with this, opportunity will also be taken to review the general level of fire protection and protection against such other mechanisms as corrosion of concrete reinforcement.

It’s all about the detail with technical support...