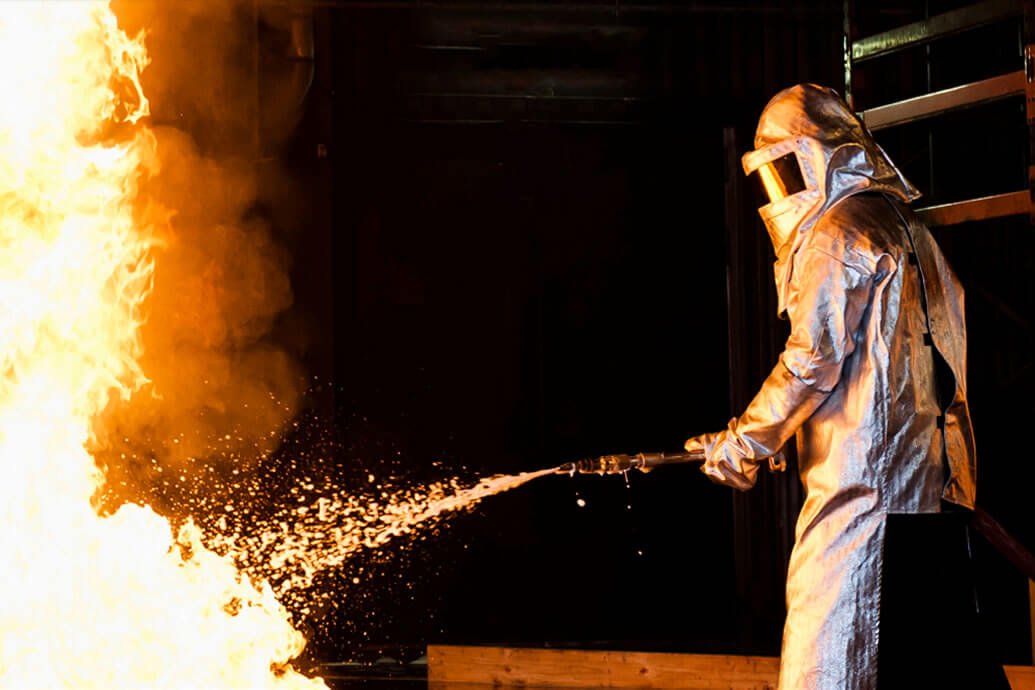 More than a decade after 3M stopped production of PFOS-based AFFF agents there is continued discussion within the fire protection industry on the environmental impact and efficacy of fire fighting foams. The discussion of environmental impact is usually focused on foams that contain fluorochemicals, while the discussion of efficacy is usually focused on foams that do not contain fluorochemicals. The first part of this fact sheet is in content and wording based on Fire Fighting Foam Coalitions fact sheet to provide you with accurate, up-to-date information about these issues. More information can be obtained from www.fffc.org. The last pages cover our own when it comes to efficiency and environmental friendliness of different foam types.

PFOS In 2002, 3M voluntarily stopped production of a number of products including AFFF agents because they contain and degrade into perfluorooctane sulfonate (PFOS). PFOS is considered by environmental authorities to be persistent, bioaccumulative and toxic (PBT). Regulations in the United States, Canada, European Union, Australia, and Japan act as a ban on new production of PFOS-based products including foams. These regulations do not currently restrict the use of existing stocks of PFOS-based foam in the US, Australia, or Japan. In the EU and Canada, existing stocks of PFOS-based foam must be removed from service in 2011 and 2013, respectively. Production and sale of PFOS foams continues in China.

All modern AFFF agents (except some produced in China) contain telomer-based fluorosurfactants. Telomer-based AFFF agents do not contain or break down into PFOS and have about 30 – 60% less fluorine than PFOS-based AFFF. Telomer-based AFFF agents are not made with any chemicals that are currently considered by environmental authorities to be PBT. The US Environmental Protection Agency (EPA) has indicated that some telomer-based fluorochemicals can break down in the environment into perfluorooctanoic acid (PFOA) or other acids (PFCAs). Further, EPA states that their concern is focused on long-chain perfluorinated chemicals (LCPFCs) containing eight carbons or more (C8, C10, C12). Existing data shows that shorter-chain compounds (C6 and below) have a lower potential for toxicity and bioaccumulation.

Under the EPA 2010/15 PFOA Stewardship Program eight fluorochemical manufacturers have voluntarily agreed to reduce by 95% by year-end 2010 and work to eliminate by year-end 2015 both plant emissions and product content of PFOA, PFOA precursors, and related higher homologue chemicals. EPA intends to propose a regulation in 2012 that would close any loopholes in the Stewardship Program such as treated article imports.

At the 2011 SUPDET Conference, the Naval Research Laboratories (NRL) presented the results of fire testing of AFFF agents and fluorine-free foam 1. Although the testing was limited in scope, it provided clear evidence of the importance of film formation to foam performance. Extinguishment times for AFFF agents on 28 ft2 (c 2.6 m2) pool fires tested at full strength were on average 77% faster for gasoline, 88% faster for (MCH), and 70% faster for heptane when compared to fluorine-free foam. For isooctane, where the tested AFFF agents were unable to form a film, foam extinguished the fire about 10% faster (Table 1). AFFF agents extinguished all gasoline and heptane fires in less than 30 seconds, the time required to pass the United States military specification (MilSpec). The fluorine-free foam was unable to extinguish any gasoline or heptane fire in less than 30 seconds. Foam agents must meet the requirements of the MilSpec in order to be listed on the US Department of Defence qualified products database (QPD) and used for military applications The Federal Aviation Administration (FAA) requires all US airports to carry AFFF agents that meet the MilSpec and are listed on the QPD.

In addition many national authorities outside of the US require the use of AFFF agents that meet the MilSpec, including the Australia Department of Defence. At the 2013 Reebok Foam Conference, a paper was presented by Manuel Acuna of VS Focum summarizing his company’s development of a fluorine-free foam agent 4 . The presentation contained side-by-side test data done at the same facility under the same conditions comparing the fire performance of AFFF agents and fluorine-free foams. The results showed that AFFF agents performed significantly better than fluorine-free foams in spray extinction tests (0.785 m2) and pan fires ranging in size from 0.25 m2 to 7.06 m2 (Table 2 and 3).

The environmental impact of AFFF-type fluorosurfactants has been extensively studied and a large body of data is available in the peer-reviewed scientific literature. The bulk of this data continues to show that C6-based AFFF fluorosurfactants and their likely breakdown products are low in toxicity and not considered to be bioaccumulative or biopersistent. Groundwater monitoring studies have shown the predominant breakdown product of the short-chain C6 fluorosurfactants contained in telomerbased AFFF to be 6:2 fluorotelomer sulfonate (6:2 FTS) 5 . A broad range of existing data on 6:2 FTS indicate that it is not similar to PFOS in either its physical or ecotoxicologicalproperties 6,7,8,9 . Recent studies on AFFF fluorosurfactants likely to break down to 6:2 FTS show it to be generally low in acute, sub-chronic, and aquatic toxicity, and neither a genetic nor developmental toxicant. Both the AFFF fluorosurfactant and 6:2 FTS were significantly lower than PFOS when tested in bio-persistence screening studies that provide a relative measure of bio up-take and clearance 1 0 . Aerobic biodegradation studies of 6:2 FTS in activated sludge have been conducted to better understand its environmental fate 11 . These studies show that the rate of 6:2 FTS biotransformation was relatively slow and the yield of all stable transformation products was 19 times lower than 6:2 fluorotelomer alcohol (6:2 FTOH) in aerobic soil. In particular, it was shown that 6:2 FTS is not likely to be a major source of perfluorocarboxylic acids or polyfluorinated acids in wastewater treatment plants. Importantly neither 6:2 FTOH nor PFHpA (perfluoroheptanoic acid) were seen in this study. PFHxA is a possible breakdown product and contaminant that may be found in trace quantities in telomer based AFFF. Extensive data on PFHxA presented in 2006 and 2007 gave a very favourable initial toxicology (hazard) profile 12,13,14 . Testing was done on four major toxicology end points: sub-chronic toxicity in rats, reproductive toxicity in rats, developmental toxicity in rats, and genetic toxicity. Results show that PFHxA was neither a selective reproductive nor a selective developmental toxicant. In addition it was clearly shown to be neither genotoxic nor mutagenic. In 2011 results were published from a 24month combined chronic toxicity and carcinogenicity study, which demonstrated that under the conditions of this study PFHxA is not carcinogenic in rats and its chronic toxicity was low 15 .

Telomer-based AFFF agents are the most effective agents currently available to fight class B, flammable liquid fires. They do not contain or breakdown into PFOS and are not likely to be a significant source of long-chain perfluorochemicals. They do contain fluorosurfactants that are persistent, but are not generally considered to be environmental toxins. AFFF and fluorochemical manufacturers are in position to meet the goals of national stewardship programs with pure fluorosurfactants that provide the same fire protection characteristics with reduced environmental impacts.

This article was supplied by Dafo Fomtec for more information visit www.fomtec.com/