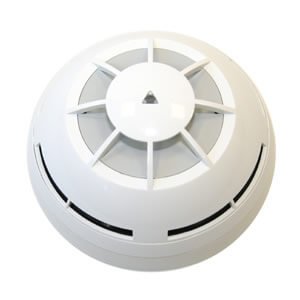 The Axis EN Wireless Photoelectric Smoke Detector has been designed to fully meet the requirements of European Standard EN54-7. The detector has the same low profile mechanical design as that of the hard wired Axis Photoelectric Smoke Detector and incorporates the same advanced features such as a unique symmetrical smoke chamber, double dust trap and a continuous insect screen.

Each device is powered using low cost lithium batteries. Both primary and secondary batteries are continuously monitored for low battery condition which is indicated by an internal LED as well as a fault condition being displayed at the translator module and the fire control panel.

Each detector will automatically adjust its frequency and manage its power radiation in accordance with the signal quality received from the Axis wireless translator module.

Bi-directional communications with the wireless translator is based on a proven protocol and wireless technology and is fast, reliable and provides the highest level of security.

The wireless communications operates on the European recommended frequency of 868 MHz and conforms to the European Standard prEN54-25.