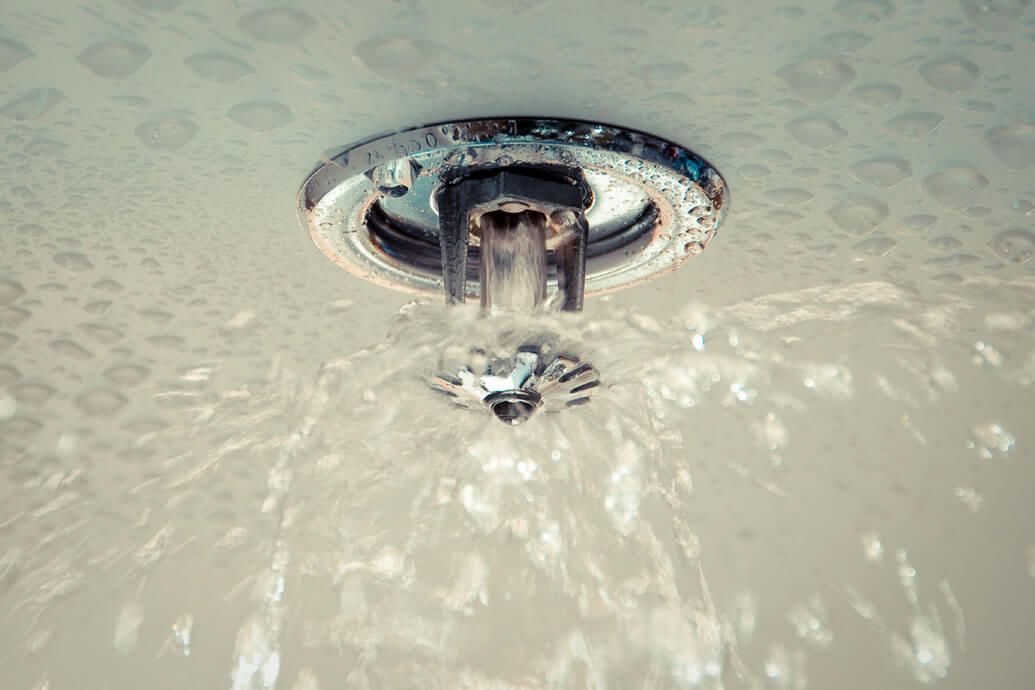 Interest in tunnel fire safety has increased dramatically in recent years owing to numerous catastrophic tunnel fires and extensive media coverage. New technologies, such as water sprinkler systems, have been developed to improve the fire safety in tunnels.

Yet it is generally accepted that automatic water sprinkler systems (AWSs) can be adversely affected by ventilation during tunnel fires, but this viewpoint has not been fully investigated. This was why, before adopting a position on the matter, we decided to investigate how AWS systems function in various longitudinal ventilation flows. The system widely accepted today is the deluge system, where one or two zones of sprinklers are activated in the event of a fire.

The heat from a fire plume rises vertically, if there is no wind in the tunnel. However, when there are longitudinal air flows, the heat and flames will be deflected and accumulate downstream of the fire. For example, it is possible that sprinklers are activated too remote from the fire to deliver water effectively.

We also wanted to address whether too many sprinklers might activate, thereby exceeding the water delivery capacity of the system. A deluge system activates one or two zones and is not sensitive to the longitudinal air flows. However, a fully AWS system in a tunnel is assumed here to cover the entire length, without being split into different zones. When individual sprinkler bulbs activate over a large area, the AWS system will fail as it cannot deliver the amount of water needed to control the fire.

This study aims to find out why such systems fail. A scale model was used, as it is cost-effective and can, if well designed, provide vital, reliable information.

In all, 28 tests were carried out in a 1:15 scale tunnel model, which was 10m long, 0.6m wide and 0.4m high, see Figure 1. The scale model corresponds to a tunnel that is 150m long, 9m wide and 6m high. The fire spread between wood cribs spaced 1.05m apart (15.75m in full scale) was tested, as were the effect of different ventilation velocities and water flow rates on the activation of nozzles. The heat release rate, fire growth rate and fire spread were measured. See SP Report 2011:31 for further information about the tests.

The tests show that the heat release rate at activation of the first nozzle (sprinkler head) increases linearly with ventilation velocity. The activation temperatures are about 206oC and 109oC for a link temperature of 141oC and 68oC, respectively.

Collapse of the system

The activation range is directly related to the longitudinal ventilation velocity and the water flow-rate of the automatic sprinklers, as shown in Figure 2.

Failure of an AWS system during a fire is defined as it having an activation range equal to or greater than 100m at full scale, i.e. a dimensionless activation range of about 15 (15 times the tunnel height). High ventilation and low water flow-rates can result in the failure of an AWS system during a tunnel fire. Note that the water flow-rates tested corresponds to 16.5mm/min, 20mm/min and 25mm/min at full scale, respectively. Note that nozzles having such flow-rates can suppress the fire efficiently as part of a deluge system.

To improve the performance of an AWS system in a tunnel fire, special strategies of variant ventilation and special control were also tested.

The special control strategy activated the sprinkler located 0.6m upstream. Using the special control strategy for nozzles also can efficiently suppress the fire development, reduce the gas temperature and prevent the failure of an AWS. Although the tested ventilation velocity was 2m/s (8m/s in full scale), it should still work under low ventilation.

Use AWS system under low ventilation

High ventilation promotes fire development, resulting in the failure of an AWS system. It should be used in tunnels with low ventilation velocities or natural ventilation.

Therefore, it is recommended that AWS systems be used in tunnels having transverse ventilation or in bi-directional tunnels, since in these tunnels longitudinal ventilation velocities will be relatively low.

AWS systems are not recommended for use in longitudinally-ventilated tunnels with high ventilation velocities, except when variant ventilation strategies or special control strategies are applied.

Focus on Tunnel Safety in Norway