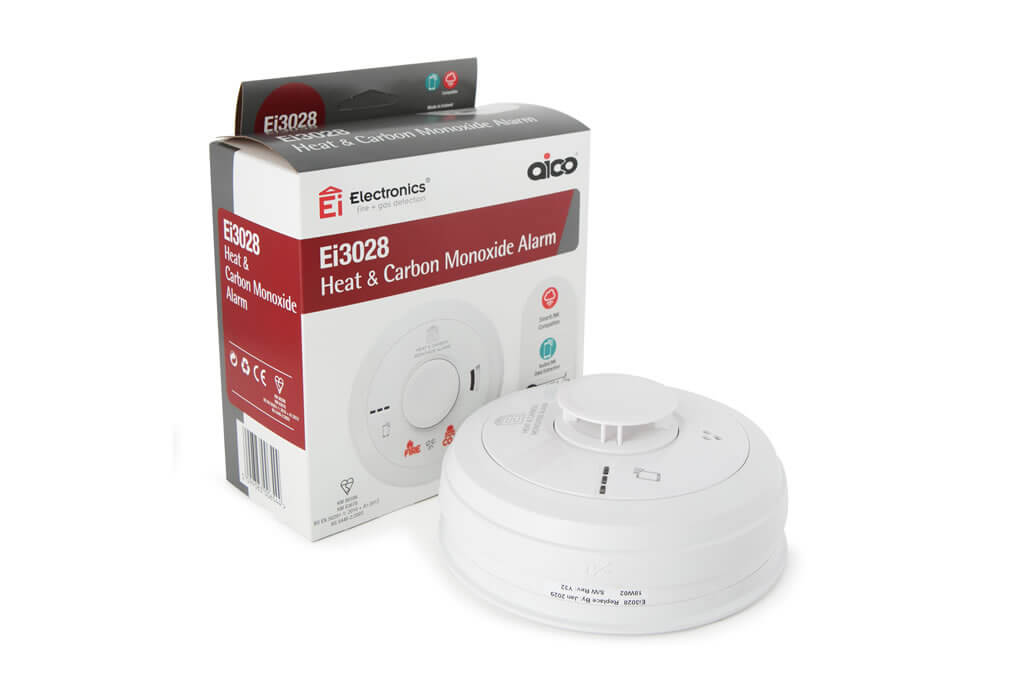 Aico Launches First Combined Heat & Co Alarm: Aico has launched its first combined Heat & Carbon Monoxide (CO) Alarm. The new Ei3028 from Aico, the UK’s market leader in domestic mains powered Fire and Carbon Monoxide detection, is the company’s first ever mains powered Multi-Sensor Heat & CO Alarm. Unique to the new 3000 Series, it is a convenient, cost-effective, efficient solution to protecting residents from both Fire and CO in the kitchen and garage.

The kitchen is the most dangerous room in a home. Cooking appliances are the main cause of accidental dwelling fires and non-fatal casualties. They, along with other appliances often found in a kitchen such as boilers, also pose a danger in the form of CO – a potentially lethal gas that you can’t see, smell or taste. Combining Heat and CO detection in one alarm is therefore a sensible approach, welcomed by landlords, contractors and residents alike.

The Ei3028 Heat & CO Alarm contains Aico’s proven electrochemical CO sensor and its tried and tested thermistor heat sensor which reacts to temperatures of 58ºC or over (and not to smoke, so it won’t alarm at cooking vapours). To distinguish between the two events – fire or CO – the alarm has a different sound for each, plus there are clear flashing fire and CO indicators on the unit itself. It comes with sophisticated AudioLINK data extraction and SmartLINK whole system remote data monitoring capability.

Managing Director Neal Hooper explains why Aico has brought this product to market: “To protect against both fire and CO has traditionally meant fitting two separate alarms – a Heat Alarm and a CO Alarm. The Ei3028 features both in one compact unit which is cost-effective in terms of outlay and installation, plus a single ceiling mounted alarm is aesthetically more appealing than two, especially if they are mismatched in design style.”

All alarms in the 3000 Series use the same easi-fit base (a first for Aico CO Alarms) and feature intelligent sensors, AudioLINK data extraction and SmartLINK wireless interconnection and whole system data monitoring capability.

Aico’s multiple award winning AudioLINK data extraction technology enables real time alarm data (e.g. number of times tested and details of alarm activations) to be extracted directly to a smartphone or tablet via an App which creates an Alarm Status Report. It identifies any issues enabling action to be taken immediately, which is effective for tenant safety and in reducing the cost of return visits to a property. AudioLINK also aids compliance for landlords, providing proof that alarms are working at the start of a new tenancy and with annual Gas Safety Checks.

Next generation Radio Frequency (RF) technology, SmartLINK enables alarms and system accessories to be interconnected using RF signals rather than hard wiring. Hard wired interconnection is time consuming, disruptive and costly in existing properties, whereas wireless interconnection is quick, easy and requires no redecorating. The new SmartLINK technology is smarter and easier to use than its predecessors and future-proof. What’s more, Aico is currently developing SmartLINK technology to enable a Gateway and Portal based system with real-time notifications.

Aico is a wholly owned subsidiary of Ei Electronics and is the UK market leader in Fire & CO protection. All alarms are designed and built in Europe specifically to meet UK standards and regulations. For more information, please visit aico.co.uk/3000series