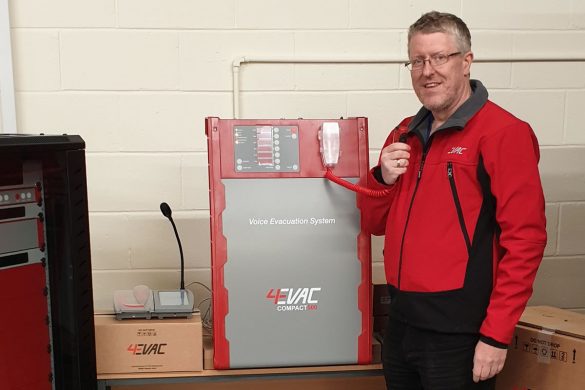 4EVAC Voice Evacuation Systems are better described as voice safety systems. The idea behind voice alarm/voice evacuation (VA/VE) is a simple one. Clear, straightforward instructions are made in a calm, human voice to direct people out of a building and to safety. Traditional fire alarm system using bells merely alert people to the fact that something is wrong. There is no information about what is going on and no direction as what to do or where to go, other than what is given in notices usually mounted on walls.

While VA/VE systems have been established as a viable technology and installed in major buildings and public areas over the last 25 years, old-fashioned bell fire alarms continue to be installed. This is despite the fact that voice Iinstructions are the most efficient and secure way to inform people on how to leave an area safely and efficiently.

The effectiveness of VA/VE equipment has continued to develop and evolve since the early days, taking advantage of digital technology to develop increasingly sophisticated products. From what would now be regarded as relatively simple message storage and play-out systems, solutions have expanded to include features for selecting and monitoring where announcements are made and the precise operation/performance of the system itself.

These increased and improved capabilities to monitor and manage sound-based evacuation systems have produced a new term: VACIE (voice alarm control and indicating equipment). This accurately describes what a modern VA/VE system has to deliver for safe and efficient management of an emergency situation. It has to give the operator the ability to select where messages are played by creating individual zones within the building, with clear representation of this in the control centre.

Any building or enclosed area where people work or visit should have some form of alarm and evacuation system. Two major sectors are: offices and business premises, such as factories and industrial estates, where many people work but members of the general public rarely come; and public spaces, including museums, court and local government buildings, shopping centres, theatres, cinemas, sports stadia, airports, railway stations, department stores and hotels. There is also a renewed awareness of the need for similar emergency capability in residential apartment blocks following the 2017 Grenfell Tower fire.

Public areas are obvious places for VA/VE 4EVAC Voice Evacuation Systems to be installed. But even though the staff in an office block or at a transport depot would have regular fire drills to ensure they know where emergency exits and safe gathering points are, voice-based systems should be the preferred method for evacuation rather than bells. Zoned messages can be used to direct people to the nearest exit and safest place to wait until the incident is over. There is also the consideration that newer personnel will be less familiar with the routines and routes than their colleagues. If we have learned anything from recent fire disasters, it is that fires are unpredictable and one of the greatest strengths of a VACIE is that it is designed for the emergency services to use in a live and fast changing situation.

Managing the movement of large numbers of people in a specified space is not easy and alarm bells, by their nature, are alarming. An announcement in a measured voice – with versions in different languages – is less likely to cause panic. The effectiveness of voice messaging for emergency evacuation has been the subject of practical research in recent years. Results show that people of different ages respond more positively to a human voice than a non-specific, insistent noise.

A study published in the medical journal Pediatrics in 2018 looked at how 176 young patients from the Nationwide Children’s Hospital in Ohio aged between five and 12 years reacted to being woken up by a traditional sounder and a voice message. The results showed that voice alarms appeared more effective than high-pitched beeps. More than 90 percent of children woke up on hearing the voice alarm message compared to just over 53 percent for the traditional alarm.

Similarly, approximately 65 percent of the children studied escaped from a room within five minutes when the alarm used the child’s mother’s voice to convey the message. This compares to just over 50 percent for the high-pitched beeps.

The research team at the Nationwide Hospital concluded that children were “remarkably resistant” to being woken by sounds alone because their sleep is deeper and longer than that of adults. A problem is that although the sound of a bell can be loud and annoying, the human brain is still able to filter it out. Research quoted by the VA/VE consultancy BL Acoustics found that only 13 percent of people responded to fire alarm bells in a timely manner. This figure increased 560% to 73 percent when a voice alarm was used.

While such benefits are acknowledged today, there is still the misapprehension that VACIE systems are primarily for large installations. This is due partly to the equally specious belief that the technology is overly sophisticated and expensive for smaller premises, as well as being complicated to install and operate.

The continuing development of digital and IT-based technologies, such as computer processors, networking devices and storage systems, has produced circuits, switchers and other components that are cheaper to produce and manufacture. These can be used to create products and systems far more powerful and intelligent than the pioneering VA/VE systems of the past, at a fraction of the cost.

Despite this practical reality the perception that VACIE technology is only for high-end, large-scale applications continues. John Inkster, general manager of the UK distributor of VACIE system developer and manufacturer 4EVAC, has worked in the sector for more than 30 years and sees this firsthand. After working for a number of well known VA and public address (PA) companies, he decided to branch out on his own to pioneer a new class of VACIE system that would not only be fully featured but also affordable for smaller installations.

In addition to this Inkster wanted to demystify the whole subjected of VA: “The basic concept is very simple; using loudspeakers and pre-recorded or live announcements to tell people how to get to safety. But the predominance of installations based around rack rooms full of amplifiers and processors has clouded the issue. It has been further complicated by the thought that this hardware relies on complex software and operating systems to configure all the different aspects and parameters.”

To dispel these misconceptions 4EVAC has developed two main VACIE products: the Compact 500 and its more recent big brother, the IMPACT. Both are based on the ‘plug-and-play’ principle and are certified to multiple, stringent EN (European Standard) regulations. The equipment is designed and manufactured in Europe to the highest standards, with the aim of bringing down installation costs while at the same time meeting the requirements of both installers and users.

The IMPACT concept takes existing 4EVAC Voice Evacuation Systems technology and presents it as a scalable, modular solution. All modules, including the DCA-2.500 amplifier and the new CONTROLLER are configured with the 4EVAC Manager programming application. The interchangeable nature of COMPACT 500 and IMPACT allows you to integrate them to create a powerful and tailored solution.

IMPACT is able to distribute messages over multiple loudspeaker lines to more zones using fewer amplifiers. The DCA-2.500 amplifier complete with EN54 charger sits in a 2U, 19-inch rack. Up to three amps can be stacked together sharing a single battery pack, providing an integrated and compliant back-up power system.

With the IMPACT and COMPACT 500, 4EVAC is making comprehensive evacuation facilities possible, not just for large public buildings but for small businesses and apartment blocks and ultimately keep people safe. Which is why perhaps voice alarm systems should be renamed voice safety systems.